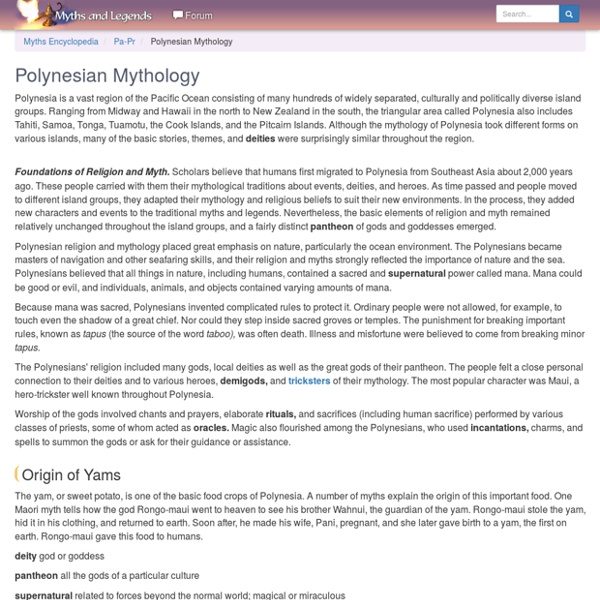 Polynesia is a vast region of the Pacific Ocean consisting of many hundreds of widely separated, culturally and politically diverse island groups. Ranging from Midway and Hawaii in the north to New Zealand in the south, the triangular area called Polynesia also includes Tahiti, Samoa, Tonga, Tuamotu, the Cook Islands, and the Pitcairn Islands. Although the mythology of Polynesia took different forms on various islands, many of the basic stories, themes, and deities were surprisingly similar throughout the region. Foundations of Religion and Myth. Scholars believe that humans first migrated to Polynesia from Southeast Asia about 2,000 years ago. These people carried with them their mythological traditions about events, deities, and heroes. Polynesian religion and mythology placed great emphasis on nature, particularly the ocean environment. Because mana was sacred, Polynesians invented complicated rules to protect it. Origin of Yams deity god or goddess Major Gods and Characters.

Polynesia - New World Encyclopedia Polynesia is generally defined as the islands within the triangle Polynesia (from the Greek words meaning "many islands") is a large grouping of over one thousand islands scattered over the central and southern Pacific Ocean. The term "Polynesia" was coined by Charles de Brosses in 1756, and originally applied to all the islands of the Pacific. In 1831 Jules Dumont d'Urville introduced the terms Micronesia and Melanesia in a lecture to the Geographical Society of Paris. This division into three distinct Pacific sub-regions remains in widespread use today. Geography What is the Climate In Turkey? - Live and Invest Overseas Most of Turkey has a Mediterranean climate and enjoys four seasons that can be more and less harsh depending on the region. Areas of Turkey nearer to the Black Sea experience the cooler Oceanic climate. Areas of Turkey near the Sea of Marmara (this area includes Istanbul) have a transitional climate that straddles both Mediterranean and Oceanic climates.

Tangaroa TANGAROA is the most important of the "departmental" gods of Polynesia. In his many cognates, he was worshiped by most Polynesians as the chief god and creator of the world. His popularity, however, depended chiefly on his role as ruler over the ocean. Polynesian culture - Kinship and social hierarchy The typical Polynesian family consisted of three or more generations. Polynesian kinship terminology distinguishes between generations, as might be expected in a society so strongly oriented toward tradition and genealogy. There are sets of terms for the grandparents’ generation, distinguishing by sex only; for the parents’ generation, in which parents are distinguished from various categories of aunts and uncles; for members of a person’s own generation, in which the terms permit identification by sex, relative age, and sometimes marital potential (marriage of certain cousin categories is preferred in some Polynesian societies); and, finally, for the children’s generation, in which age and sex are again distinguished.

Hawaiian Myths and Legends Hawaii is full of myths and legends - stories that are full of passion, betrayal, loyalty, birth and death. According to W.D. Westervelt, one of the most famed re-tellers of Hawaiian myths and legends back in the early 1900s, some of these myths and legends were very similar to the stories told in Tahiti, Samoa, Fiji, New Zealand and other islands in the Pacific Ocean. These Hawaiian stories tell the tales of gods and men, ghosts and goblins. One Hawaiian chant speaks of as many as "four thousand gods" of the Hawaiian people.

History, Religion, Traditions, & Facts Polynesian culture, the beliefs and practices of the indigenous peoples of the ethnogeographic group of Pacific islands known as Polynesia (from Greek poly ‘many’ and nēsoi ‘islands’). Polynesia encompasses a huge triangular area of the east-central Pacific Ocean. The triangle has its apex at the Hawaiian Islands in the north and its base angles at New Zealand (Aotearoa) in the west and Easter Island (Rapa Nui) in the east. Japan Geography Location Japan consists of several thousands of islands, of which Honshu, Hokkaido, Kyushu and Shikoku are the four largest. Japan's closest neighbors are Korea, Russia and China. Polynesian Cultural Center: 9 Polynesian Foods to Eat Nothing goes with culture better than food. When we were in Hawaii, my wife Ying and I were invited to the Polynesian Cultural Center to explore the different Polynesian villages, and to experience Polynesian food. I got to try some of the popular snacks and foods from some of the major Polynesian islands, and I’m about to share everything we ate with you in this blog post.