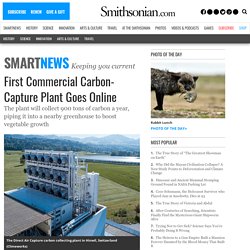 The company hopes to quickly scale up its technology and capture one percent of the global carbon dioxide produced by burning fossil fuels by 2025, reports Bobby Magill for Climate Central. The company estimates that the plant will remove some 900 tons of CO2 from the atmosphere every year—a tiny fraction of the 10 gigtons that the Intergovernmental Panel on Climate Change determined must be drawn down each year to halt global warming, writes Tereza Pultarova for Live Science. Located near the Swiss village of Hinwil on the roof of a garbage incinerator, the direct air capture technology uses a proprietary filter to absorb atmospheric CO2 as it passes through the plant, according to a press release. 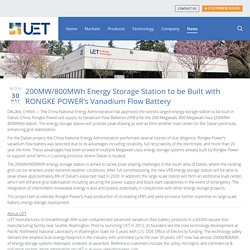 Rongke Power will supply its Vanadium Flow Batteries (VFB’s) for the 200-Megawatt, 800-Megawatt-hour (200MW/ 800MWh) station. The energy storage station will provide peak-shaving as well as form another load center for the Dalian peninsula, enhancing grid stabilization. For the Dalian project, the China National Energy Administration performed several rounds of due diligence. Rongke Power’s vanadium flow battery was selected due to its advantages including reliability, full recyclability of the electrolyte, and more than 20 year life-time.

These advantages had been proved in multiple Megawatt-class energy storage systems already built by Rongke Power to support wind farms in Liaoning province, where Dalian is located. About Rongke PowerDalian Rongke Power Co., Ltd. is a vertically-integrated manufacturer of vanadium flow batteries. America's Amazon Problem. Our Dishonest President - Los Angeles Times. Obama’s Legacy: Nearly 450 Accomplishments, With Citations. I know it is hard to believe now, but it wasn’t that long ago that we had a perfectly sane, competent and adult presence in the White House. 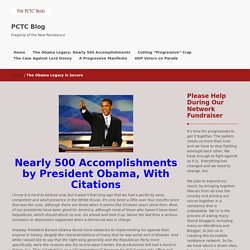 It’s only been a little over four months since that was the case, although there are times when it seems like it’s been years since then. Most of our presidents have been good for America, although most of those who haven’t have been Republican, which should shock no one. Go ahead and look it up. Name the last time a serious recession or depression happened when a Democrat was in charge.

Anyway, President Barack Obama faced more obstacles to implementing his agenda than anyone in history, despite the characterizations of many that he was some sort of disaster. Anyone who has ever referred to President Obama as anything less than “amazing” is not paying close attention. Despite the massive hurdles he faced because he was a Democrat and because he was black, President Obama accomplished a lot. 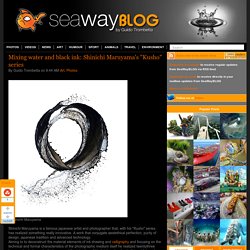 A work that conjugate aestethical perfection, purity of design, japanese tradition and advanced technology.Aiming to to deconstruct the material elements of ink drawing and calligraphy and focusing on the technical and formal characteristics of the photographic medium itself he realized twentythree large scale photographs that represent the interplay of black ink and water, both in midair and on white surfaces.The photographs are realized with many different techniques and are possible thanks to recent advances in strobe light technology allowing the artist to capture as little as an astonishing 20.000th of a second. To view the other images of the series as well as other Matuyama's works and to know more info about the techniques he uses to take these unbelievable pictures visitSHINICHI MARUYAMA'S OFFICIAL WEBSITE. Writing in the Sky - Kusho by Shinichi Maruyama (8 photos) This looks like fun. 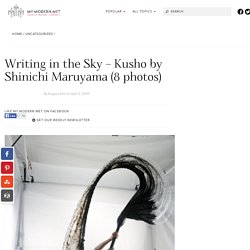 Born in Nagano, Japan in 1968, Shinichi Maruyama hurls black India ink into water and photographs the millisecond that these two liquids collide. Capable of capturing this phenomenon at a 7,500th of a second, Maruyama takes full advantage of a recent advancement in strobe light technology which can record physical events faster than the naked eye can perceive them. Ask a Librarian: What’s the Strangest Thing You’ve Found in a Library Book? In Claire Fuller’s Swimming Lessons (on shelves February 7), Ingrid writes letters to Gil about the truth of their marriage, then hides them in used books from their library. 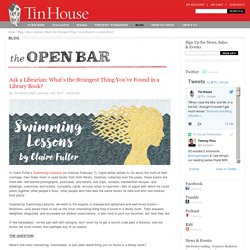 Carefully collected over the years, these books are filled with “left-behind photographs, postcards, and letters; bail slips, receipts, handwritten recipes, and drawings; valentines and tickets, sympathy cards, excuse notes to teachers—bits of paper with which he could piece together other people’s lives, other people who had read the same books he held and who had marked their place.”