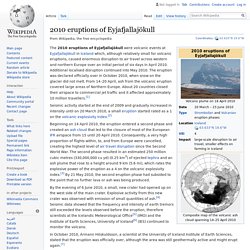 Additional localised disruption continued into May 2010. The eruption was declared officially over in October 2010, when snow on the glacier did not melt. From 14–20 April, ash from the volcanic eruption covered large areas of Northern Europe. About 20 countries closed their airspace to commercial jet traffic and it affected approximately 10 million travellers.[1] Seismic activity started at the end of 2009 and gradually increased in intensity until on 20 March 2010, a small eruption started rated as a 1 on the volcanic explosivity index.[2] Beginning on 14 April 2010, the eruption entered a second phase and created an ash cloud that led to the closure of most of the European IFR airspace from 15 until 20 April 2010. 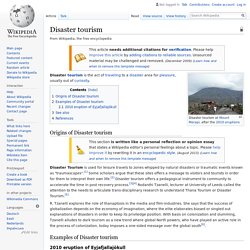 Origins of Disaster tourism Disaster Tourism is used for leisure travels to zones whipped by natural disasters or traumatic events known as "traumascapes".[1] Some scholars argue that these sites offers a message to visitors and tourists in order for them to interpret their own life.[2] Disaster tourism offers a pedagogical instrument to community to accelerate the time in post recovery process.[3][4] Rodanthi Tzanelli, lecturer at University of Leeds called the attention to the needs to articulate trans-disciplinary research to understand Thana Tourism or Disaster Tourism.[5] R. 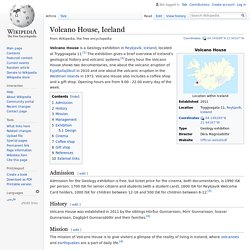 Volcano House also includes a coffee shop and a gift shop. Opening hours are from 9.00 - 22.00 every day of the week. Admission[edit] Admission for the Geology exhibition is free, but ticket price for the cinema, both documentaries, is 1990 ISK per person. 1700 ISK for senior citizens and students (with a student card), 1600 ISK for Reykjavik Welcome Card holders, 1000 ISK for children between 12-16 and 500 ISK for children between 6-12.[3] History[edit] 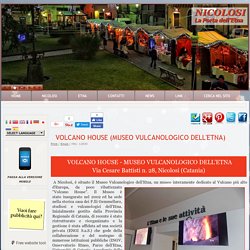 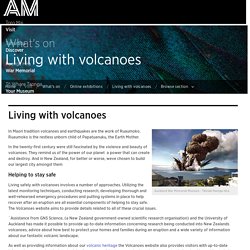 Ruaumoko is the restless unborn child of Papatuanuku, the Earth Mother. In the twenty-first century were still fascinated by the violence and beauty of volcanoes. Indonesia's Travel Directory. Indonesia is rich in volcanoes and is known as the Ring of Fire. 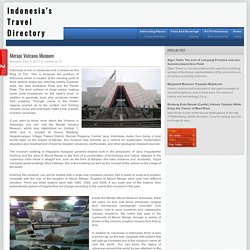 This is because the position of Indonesia which is located at the meeting point of three tectonic plates are colliding namely Eurasian plate, the Indo Australian Plate and the Pacific Plate. The third collision of these plates, making some parts breakdown on the earth's crust, in addition to generate heat, also produces molten rock (magma). Through cracks in the molten magma pushed up to the surface and forming volcanic cones and eventually make it into a series of active volcanoes. If you want to know more about the Volcano in Indonesia, you can visit the Merapi Volcano Museum, which was established on October 1, 2009 and is located at Dusun Banteng, Hargobinangun Village, Pakem District, Sleman Regency, Central Java, Indonesia. 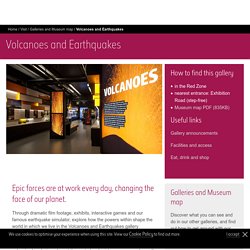 Through dramatic film footage, exhibits, interactive games and our famous earthquake simulator, explore how the powers within shape the world in which we live in the Volcanoes and Earthquakes gallery. Examine fossils from a time when all Earth's continents were joined, and the animals that evolved after the continents separated. See lava bombs, volcanic glass hair, and crystals created under intense pressure beneath Earth's surface. the heat suits and field equipment used by scientists studying volcanoescasts of victims from the Mount Vesuvius eruption of AD 79objects melted by lava flowshydrothermal vents that release hot magma from under the seahistoric seismographic equipmentbuilding techniques to guard against earthquake damage Audio descriptive guide Download an audio descriptive guide to the Volcanoes and Earthquakes gallery: 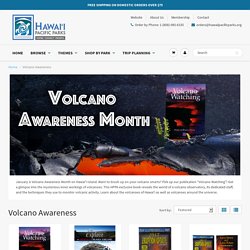 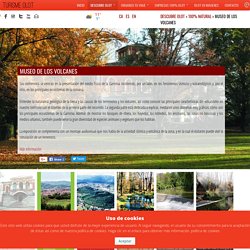 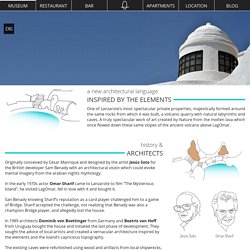