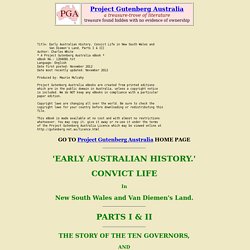 Convict Life in New South Wales and Van Diemen's Land, Parts I & II] Author: Charles White * A Project Gutenberg Australia eBook * eBook No.: 1204081.txt Language: English Date first posted: November 2012 Date most recently updated: November 2012 Produced by: Maurie Mulcahy Project Gutenberg Australia eBooks are created from printed editions which are in the public domain in Australia, unless a copyright notice is included. We do NOT keep any eBooks in compliance with a particular paper edition. Copyright laws are changing all over the world. Be sure to check the copyright laws for your country before downloading or redistributing this file. This eBook is made available at no cost and with almost no restrictions whatsoever. Convicts and colonisers:the early history of Australia. Thomas Barrett was sentenced to death three times. 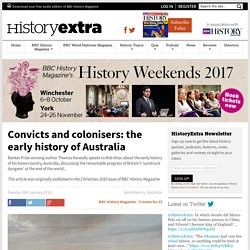 His first capital offence was in 1782 when, as a young boy, he was found guilty of stealing a silver watch in London. Barrett’s sentence was commuted and he was despatched instead to the North American colonies. However before his ship had left Britain there was a convict uprising that enabled Barrett to escape. His freedom was short-lived. Barrett was recaptured and the death penalty was again handed down for his actions. Australian History : Convicts. During the period between 1788 and 1868, about 160,000 convicts were sent to Australia. 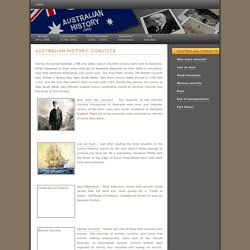 What happened to them when they got to Australia depended on their skills or education, how they behaved themselves and some luck. The First Fleet carried 780 British convicts who landed in Botany Bay, New South Wales. Two more convict fleets arrived in 1790 and 1791, and the first free settlers didn' arrived until 1793. During this period, the colony of New South Wales was officially a penal colony comprising mainly of convicts, marines and the wives of the marines. Who were the convicts? Low on food - Just after landing the food situation in the colony became scarce as the land wasn't fertile enough to produce any food yet. Good Behaviour - Good behaviour meant that convicts rarely served their full term and could qualify for a "Ticket of Leave", Certificate of Freedom, Conditional Pardon or even an Absolute Pardon.

Life on a Convict Ship - Western Australia. Convicts To Australia ... Research Guide - Life at Sea. Convicts were housed below decks on the prison deck and further confined behind bars. 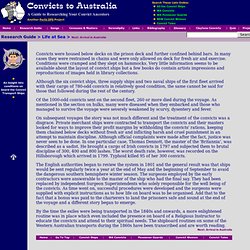 In many cases they were restrained in chains and were only allowed on deck for fresh air and exercise. Conditions were cramped and they slept on hammocks. Very little information seems to be available about the layout of convict ships but a few books do contain artists impressions and reproductions of images held in library collections. Although the six convict ships, three supply ships and two naval ships of the first fleet arrived with their cargo of 780-odd convicts in relatively good condition, the same cannot be said for those that followed during the rest of the century. Convicts To Australia ... Research Guide - Timeline. The colony of VAN DIEMEN'S LAND was established in its own right and its name was officially changed to TASMANIA on 01/01/1856. 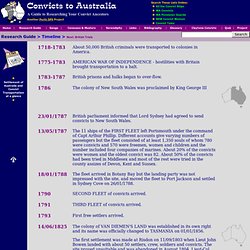 The first settlement was made at Risdon on 11/09/1803 when Lieut John Bowen landed with about 50 settlers, crew, soldiers and convicts. The site proved unsuitable and was abandoned in August 1804. The convict system. Between 1788 and 1868, 165,000 convicts were transported to Australia. 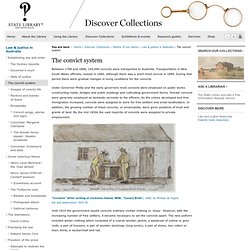 Transportation in New South Wales officially ceased in 1840, although there was a short-lived revival in 1849. During that period there were gradual changes in living conditions for the convicts. Under Governor Phillip and the early governors most convicts were employed on public works constructing roads, bridges and public buildings and cultivating government farms. Female convicts were generally employed as domestic servants to the officers. A convict Story. Convict Facts. Convict tokens. At a glance Coins engraved with convict details and messages of affection World's largest collection Created between 1762 and 1856 Left behind by convicts with their loved ones in England A rare personal and emotional memento from prisoners On show in the Journeys gallery Rare personal convict mementos Smoothing and engraving a coin with a message of affection was one of the few ways a convict transported to Australia could leave a memento behind with loved ones in England. 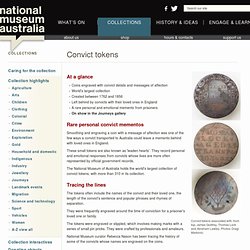 These small tokens are also known as 'leaden hearts'. They record personal and emotional responses from convicts whose lives are more often represented by official government records. The National Museum of Australia holds the world's largest collection of convict tokens, with more than 310 in its collection. Tracing the lines The tokens often include the names of the convict and their loved one, the length of the convict's sentence and popular phrases and rhymes of separation. James Godfrey Thomas Lock Abraham Lawley Journeys. Meet a convict. Browse Convicts. Browse By Surname Browse convicts by their surname. 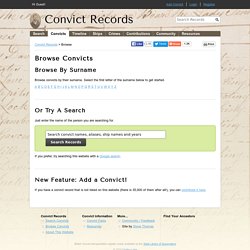 Select the first letter of the surname below to get started. Or Try A Search Just enter the name of the person you are searching for. If you prefer, try searching this website with a Google search. Pictures - Convict portraits, Port Arthur, 1874 [picture] Convicts To Australia ... Some Tales. Profiles.