Encounter 2020 commemorating Cook’s arrival to Australia on Endeavour. Captain James Cook’s Endeavour and the impact its arrival had on Australia’s Indigenous peoples will be the focus of a new national travelling exhibition unveiled today. 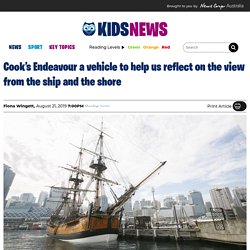 Minister for Communications and the Arts Paul Fletcher and the Minister for Indigenous Australians Ken Wyatt launched the project, called Encounter 2020. Through a series of exhibitions and events around the country, Encounter 2020 will commemorate the 250th anniversary since Captain Cook arrived in Botany Bay and went on to chart the east coast of Australia. Central to it will be the lasting impact that arrival had on Australia’s First Peoples and in shaping the country’s future. 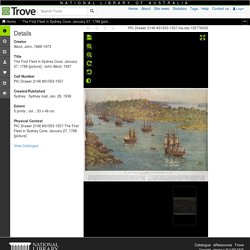 First Fleet Sketches - Australian History, Discovery and Exploration. From the series Hidden Treasures – Inside the National Library of Australia. 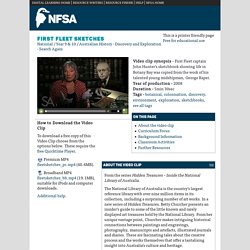 The National Library of Australia is the country’s largest reference library with over nine million items in its collection, including a surprising number of art works. In a new series of Hidden Treasures, Betty Churcher presents an insider’s guide to some of the little known and rarely displayed art treasures held by the National Library. First Fleet - Classroom - BTN. Kid 1: "My name is John Hudson and I'm nine years old. 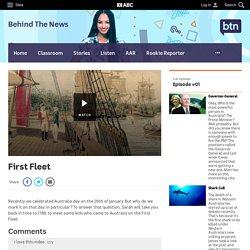 I've been an orphan ever since I can remember and I made a living sweeping chimneys. It was horrible work, dangerous too. In the summertime there's no need for sweeping so I took to thieving to survive. " Kid 2: "For the theft of one linen shirt, value 10 shillings, five silk stockings, value 5 shillings, one pistol, value 5 shillings, and two aprons, value 2 shillings. You are found guilty! " List of Livestock, Provisions, Plants and Seeds - First Fleet Fellowship Victoria Inc. First Fleet - First European Settlers of Australia - Facts, History. "The First Fleet" is the name given to a group of 11 ships that sailed from Portsmouth, England on 13 May 1787 and arrived in Australia on 18 January 1788, with the first European settlers of Australia. 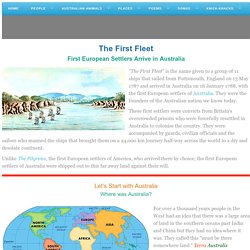 They were the founders of the Australian nation we know today. These first settlers were convicts from Britain's overcrowded prisons who were forcefully resettled in Australia to colonise the country. They were accompanied by guards, civilian officials and the sailors who manned the ships that brought them on a 24,000 km journey half-way across the world to a dry and desolate continent. Unlike The Pilgrims, the first European settlers of America, who arrived there by choice; the first European settlers of Australia were shipped out to this far away land against their will.

Let's Start with Australia Where was Australia? For over a thousand years people in the West had an idea that there was a large area of land in the southern oceans past India and China but they had no idea where it was. Terra Nullius. Education resources for schools teachers and students - ABC Education. Transcript Transcript 00:00:09:23GIRL:My name is Elizabeth Haywood and I'm 13 years old. 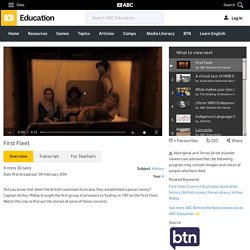 I was apprenticed to a clog maker in London, but I was paid so little, so I stole some clothes and tried to sell them.00:00:20:10WOMAN:Oi! From Terra Australis to Australia. 1780s - The First Fleet - My Place. In May 1787 the First Fleet, commanded by Captain Arthur Phillip (1738–1814), left Portsmouth in England with six convict transports, three store ships and two navy vessels, including the flagship HMS Sirius. 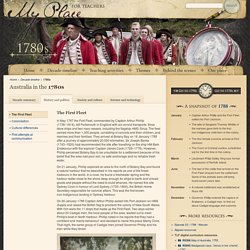 The fleet carried more than 1,300 people, consisting of convicts and their children, and marines and their families. They arrived at Botany Bay on 18 January 1788 after a journey of approximately 20,000 kilometres. Sir Joseph Banks (1743–1820) had recommended the site after travelling on the ship HM Bark Endeavour with the explorer Captain James Cook (1728–1779). However, Phillip perceived Botany Bay to be unsuitable for a settlement because of his belief that the area had poor soil, no safe anchorage and no reliable fresh water.

First Fleet Online - ltcprd. First Fleet: 04/02/2014, Behind the News. Recently we celebrated Australia day on the 26th of January. 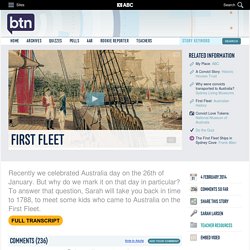 But why do we mark it on that day in particular? To answer that question, Sarah will take you back in time to 1788, to meet some kids who came to Australia on the First Fleet. Kid 1: “My name is John Hudson and I'm nine years old. I've been an orphan ever since I can remember and I made a living sweeping chimneys. The First Fleet - Australia's migration history timeline. The Founding of Australia. 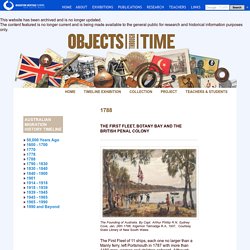 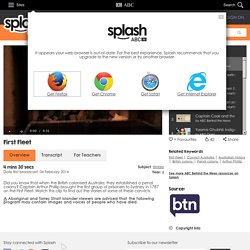 I was apprenticed to a clog maker in London, but I was paid so little, so I stole some clothes and tried to sell them.00:00:20:10WOMAN:Oi! Why a colony? - Australia's migration history timeline. Black-eyed Sue and Sweet Poll of Plymouth taking leave of their lovers who are going to Botany Bay, Robert Sayer, 1792. Courtesy National Library of Australia By the 1790s British Investors were purchasing 38,000 slaves a year. Over sixty percent of the world’s slave trade was transported in British ships. Slavery and the feudal farm system were under attack by evangelical reformers who fought for personal liberty and the right of the individual. Industrials too had become opposed to slavery and the feudal farm system for they had discovered that for manufacturers, it was not economical to rely on a captive work force who along with their families, had to be fed, clothed and housed on a daily basis.

These ‘reforms’ only worked to create the massive unemployment of the Industrial Revolution. 1780s - Colonisation - My Place. When the War of American Independence (1775–83) ended, Great Britain lost its American colonies and was deprived of a place to dispose of its convicts. During the war, Great Britain could not transport convicts and their numbers had increased significantly. The convicts were jailed in the hulks of old dilapidated warships moored in Plymouth and on the Thames estuary. Pressure to find another site for transportation mounted. Sydney Living Museums. Initially, convict work was focused on the basics of survival and shelter: clearing land; cutting trees; forming docks, tracks, bridges and fortifications; and gathering materials for storehouses and workshops, such as shingles, logs, saplings, rocks, mud, sand and oyster-shell mortar. Convicts built their own houses, some in neat rows, others jumbled on the rugged shelves of The Rocks.

Convicts also hunted, fished, and collected oysters from the foreshores, as well as vegetables and tea from the bush. Historians think that this is why the population were reportedly in such good health. In addition, coming from a country where their beloved ‘commons’ had been taken from them and enclosed, they relished this new freedom to roam and forage in the bush. Colonial foundations. Explores the formative years of four British settlements. Convict cargo. Convict cargo 1788: Captain Arthur Phillip establishes a convict settlement at Sydney Cove Captain Arthur Phillip RN was the commander of the First Fleet of 11 ships that sailed into Botany Bay, New South Wales, in January 1788. Three days later he chose a site at nearby Sydney Cove, in Port Jackson, and on 26 January began to establish a convict settlement.

Phillip proved himself to be an enthusiastic and thorough leader who dealt in commonsense fashion with the challenges he faced in the early years of settlement. More on convict cargo Arthur Phillip to Lord Sydney, 10 July 1788: Anxious to render a very essential service to my country by the establishment of a colony which, from its situation, must hereafter be a valuable acquisition to Great Britain, no perseverance will be wanting on my part, and which consideration alone would make amends for the being surrounded by the most infamous of mankind. Port Jackson Harbour, in New South Wales: with a distant view of the Blue Mountains. Australia.gov.au. From Terra Australis to Australia. The Eleven Ships - First Fleet Fellowship Victoria Inc. Female convicts. The London convict maid, a cautionary tale of life in the colony. Female convicts were predominantly young, single women who had been domestic servants and/or who had come from a semi-skilled background - such as an apprenticeship.

Female Convicts - Convict Stories. My dearest Margaret This letter is written to you by my son, Samuel, who can read and write, whereas I never learned to do so. Samuel urged me to tell my story, so that future generations know from whence they came. Convicts - First Fleet Fellowship Victoria Inc. CONVICT database - Google Sheets.