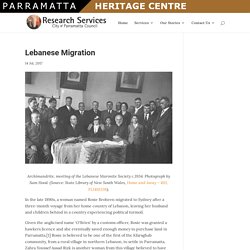 Photograph by Sam Hood. (Source: State Library of New South Wales, Home and Away – 4111, FL1410338). In the late 1890s, a woman named Rosie Broheen migrated to Sydney after a three-month voyage from her home country of Lebanon, leaving her husband and children behind in a country experiencing political turmoil. Fazlinda's journey from Malaysia. My name is Linda. 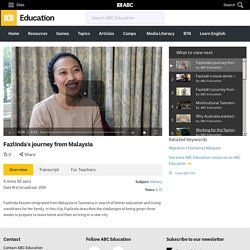 I'm from Malaysia. I came to Tasmania last year in July. We came to Tasmania because we want a better life, a better education for the children. I lived in Kuala Lumpur, capital city of Malaysia, and it's very busy. Fazelah’s journey from Afghanistan. I was born in Afghanistan, which is Ghazni. 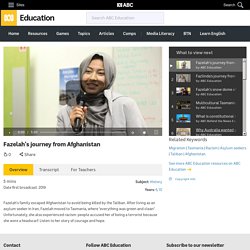 The city that I was born is called Ghazni. And the reason we left Afghanistan was because at that time it was civil war. So my mother decided to leave Afghanistan because if we stayed there, we would be killed by the Taliban. They did everything, lots of dangerous things, maybe they would kill us, lots of the Hazara people. Chinese migration to Tin Mountain. The first Chinese people to come to Tasmania weren't in fact miners at all. 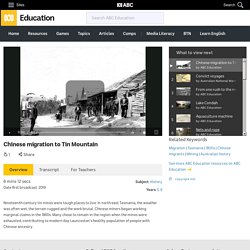 They were carpenters: in 1830 A Launceston businessman actually imported nine specialist furniture makers to make a specialist product for him, anticipating that there'd be a market that would sell well. But the main influx of Chinese miners didn't happen until the 1860s. It started off, to begin with, not so much because of what became the big export from here, which was tin. Assisted migration to Van Diemen's Land. History of Darwin's Chinese community - ABC Education. Immigration in regional Victoria - ABC Education. Australia to force migrants to live in regional areas as condition of citizenship to manage overpopulation. Migrants will be required to live in Australia’s regions or smaller states for five years or face losing the chance to apply for citizenship* under new plans to tackle crowding in our biggest cities. 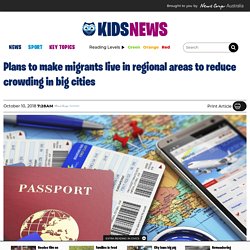 Population and Urban ­Infrastructure* Minister Alan Tudge explained the plan yesterday and revealed that having Australian workers stuck in city traffic will cost $40 billion within 10 years. Mr Tudge also said the government is looking into funding for fast rail links between big cities and surrounding regional hubs* in a speech to the Menzies Research Centre in Melbourne yesterday.

The minister outlined how infrastructure has failed to keep up with a population boom “turbocharged*” by higher rates of immigration since 2007. Population and migration statistics in Australia. 7 December 2018 PDF version [429KB] Joanne Simon-DaviesStatistics and Mapping Section Introduction. 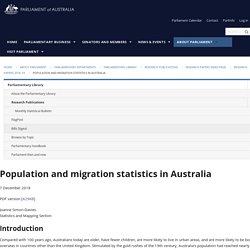 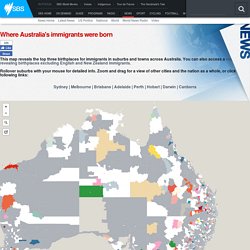 You can also access a map revealing birthplaces excluding English and New Zealand immigrants. Rollover suburbs with your mouse for detailed info. Zoom and drag for a view of other cities and the nation as a whole, or click on the following links: Sydney | Melbourne | Brisbane | Adelaide | Perth | Hobart | Darwin | Canberra Where Australia's immigrants were born (excluding England and NZ) 1830 – 1840s. 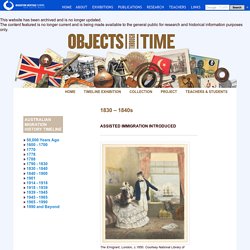 Courtesy National Library of Australia From 1815 the Colonial Government decided to promote the migration of free settlers and limit squatter land leases to 14 years. This was to create an emancipist consumer economy and improve the moral tone of the colony. The Colonial Government assisted some migrants by paying their fare to Australia and helped to set up farms and businesses alongside the wealthy squatters – who of course were not very happy with such competition. About one third of migrants who came to Australia between 1830 and 1850 paid their own way. Timeline: 1800's - Racism. No Way! 1840 – 1900. Circular Quay, Charles Percy Pickering, 1871. 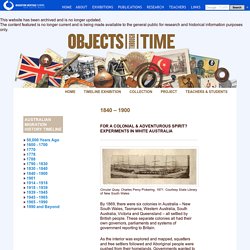 Courtesy State Library of New South Wales By 1869, there were six colonies in Australia – New South Wales, Tasmania, Western Australia, South Australia, Victoria and Queensland – all settled by British people. These separate colonies all had their own governors, parliaments and systems of government reporting to Britain. Australian Cultural Diversity Timeline - pre 1800 to today. Explore Australia’s development as a culturally diverse nation. 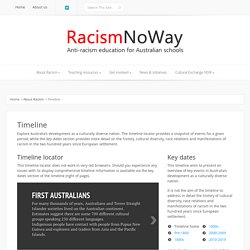 The timeline locator provides a snapshot of events for a given period, while the key dates section provides more detail on the history, cultural diversity, race relations and manifestations of racism in the two hundred years since European settlement. Chapter.1157.body. Introduction When we discuss settlement patterns, we look at the historical flows and migration patterns of the population over time. We also observe population growth rates and density rates in particular areas. By observing past and present settlement patterns, we can observe the impacts of change on different Australian communities. Australia's migration history timeline. Black-eyed Sue and Sweet Poll of Plymouth taking leave of their lovers who are going to Botany Bay, Robert Sayer, 1792.

Courtesy National Library of Australia By the 1790s British Investors were purchasing 38,000 slaves a year. Over sixty percent of the world’s slave trade was transported in British ships. Slavery and the feudal farm system were under attack by evangelical reformers who fought for personal liberty and the right of the individual. Industrials too had become opposed to slavery and the feudal farm system for they had discovered that for manufacturers, it was not economical to rely on a captive work force who along with their families, had to be fed, clothed and housed on a daily basis.

White Australia Policy. 20th Century. Timeline: Australia's Immigration Policy. 1831 – 43 years after the arrival of the First Fleet and the beginning of British colonisation in Australia, the first assisted migration begins with workers from Britain encouraged to apply. Other immigrants follow that decade, including German Lutherans leaving their homeland in search of religious freedom and better economic opportunities.

Immigration Australia Timeline. Since the arrival of the First Fleet on the shores of Botany Bay in 1788, close to 10 million settlers have come from all corners of the globe to call Australia home. Driven by the promise of a new life the Great Southern Land, waves of immigrants came to find fortune in the gold rush, to escape the social upheaval of the Industrial Revolution, two world wars and the aftermath of the Vietnam War.

These migrants have played a vital role in shaping Australia’s history, forming the multicultural identity we pride ourselves on today. Journeys to Australia - Museums Victoria. An immigration nation. Australia's Population History: 13/03/2018, Behind the News. Travel back in time to witness our long journey to the 24 million people that we have in Australia today. People. There are quite a few of them around. But like, where did they all come from? French in Australia sl.nsw.gov. Bendigo’s big new dragon arrives. How Chinese immigration became one of the most controversial topics in the colonies. Chinese Migration: 17/02/2015, Behind the News. February the 19th is Chinese New Year, which is a big deal to the hundreds of thousands of Chinese Australians that call this country home.