Body Maps – changing bodies in our heads. – Ancestral Movement. It’s funny how when there is a lot to say, it’s often easier to say nothing. 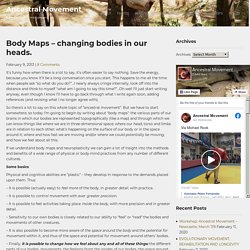 Save the energy, because you know it’ll be a long conversation once you start. This happens to me all the time when people ask “so what do you do?” …I nearly always cringe internally, look off into the distance and think to myself “what am I going to say this time?” …Oh well I’ll just start writing anyway, even though I know I’ll have to go back through what I write again soon, adding references (and revising what I no longer agree with). Proprioception, the True Sixth Sense. How Our Sense of Touch is a Lot Like the Way We Hear – Science Life. When you walk into a darkened room, your first instinct is to feel around for a light switch. 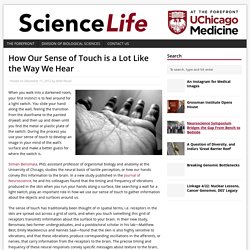 You slide your hand along the wall, feeling the transition from the doorframe to the painted drywall, and then up and down until you find the metal or plastic plate of the switch. During the process you use your sense of touch to develop an image in your mind of the wall’s surface and make a better guess for where the switch is. Sliman Bensmaia, PhD, assistant professor of organismal biology and anatomy at the University of Chicago, studies the neural basis of tactile perception, or how our hands convey this information to the brain. 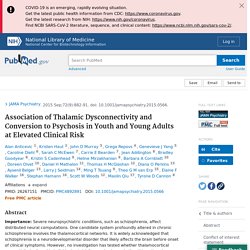 One candidate system profoundly altered in chronic schizophrenia involves the thalamocortical networks. It is widely acknowledged that schizophrenia is a neurodevelopmental disorder that likely affects the brain before onset of clinical symptoms. However, no investigation has tested whether thalamocortical connectivity is altered in individuals at risk for psychosis or whether this pattern is more severe in individuals who later develop full-blown illness. Objectives: To determine whether baseline thalamocortical connectivity differs between individuals at clinical high risk for psychosis and healthy controls, whether this pattern is more severe in those who later convert to full-blown illness, and whether magnitude of thalamocortical dysconnectivity is associated with baseline prodromal symptom severity. Functional connectome fingerprinting: identifying individuals using patterns of brain connectivity - PubMed.

The Neural Correlates of Consciousness and Attention: Two Sister Processes of the Brain. Introduction During the last three decades the advent and development of new scientific procedures, such as the functional magnetic resonance imaging (fMRI) and the positron emission tomography (PET), have allowed neuroscientists to study the activity of the living brain. 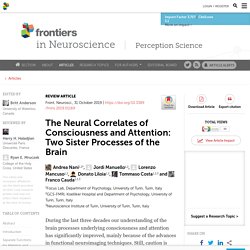 These methods have been extensively used to determine the activation of brain regions in connection with specific cognitive functions. Although these tools of scientific investigation have significant limitations in terms of temporal resolution (Raichle, 1998; Logothetis and Wandell, 2004), they nonetheless have good performances in spatial resolution. Neurons and Glia: Neuroscience in Action. Course Modules: Neuroscience in Action. Iliopsoas - Recherche Google. The Basics of the Immune System. NIH: National Institute of Allergy and Infectious Diseases. Function The overall function of the immune system is to prevent or limit infection. 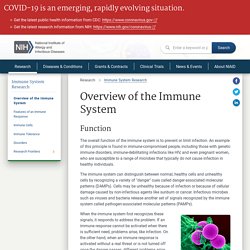 An example of this principle is found in immune-compromised people, including those with genetic immune disorders, immune-debilitating infections like HIV, and even pregnant women, who are susceptible to a range of microbes that typically do not cause infection in healthy individuals. The immune system can distinguish between normal, healthy cells and unhealthy cells by recognizing a variety of "danger" cues called danger-associated molecular patterns (DAMPs). Cells may be unhealthy because of infection or because of cellular damage caused by non-infectious agents like sunburn or cancer. Improved Protein Structure Prediction Using Potentials From Deep Learning - PubMed. Protein structure prediction can be used to determine the three-dimensional shape of a protein from its amino acid sequence1. 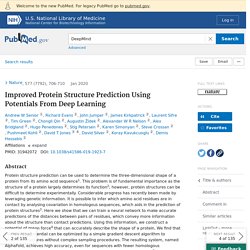 This problem is of fundamental importance as the structure of a protein largely determines its function2; however, protein structures can be difficult to determine experimentally. Considerable progress has recently been made by leveraging genetic information. It is possible to infer which amino acid residues are in contact by analysing covariation in homologous sequences, which aids in the prediction of protein structures3. ScienceDirect Topics. Induced Proximity The seminal discovery that death receptor signaling required, in its most basic form, simply a transmembrane receptor, an adaptor molecule, and a caspase [19, 20] revealed a solution to the perplexing problem of how the first proteolytic signal was generated during apoptosis, since it implicated a caspase directly in the triggering event. 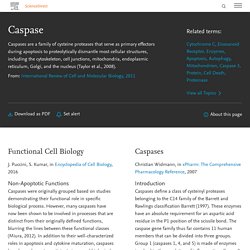 Prior to this work, receptors were thought to signal by either altering the phosphorylation status of key signaling molecules, or by functioning as ion channels. Death receptors such as Fas signal by direct recruitment and activation of a protease (caspase 8). Concomitantly with this work, groundbreaking studies showed that the intrinsic pathway was activated by a co-factor known as apoptosis protease activating factor (Apaf-1) [21]. Subsequently, Apaf-1 was found to recruit and activate caspase 9, forming the “apoptosome” [22]. The Blood Typing Game. Biomarkers Consortium. ... en vue. Immune System: Innate and Adaptive Immunity Explained. Action Potential in the Neuron. Invigorating. Problematica. Twist baby twist. Vitality. Roaring. Robust.