An easy way to learn foreign languages - The Polyglot Dream. Listening and reading have made up the bread and butter of my language learning since I was 13. 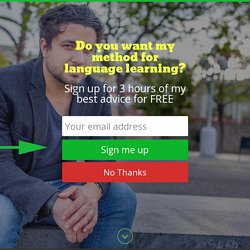 My highly effective language learning method has developed from that. The method is simple. I study every day (1 – 2 hours max). Shortcuts sound sexy and give you a short-term buzz, but the effects fade away quickly. My method is efficient and gets you fluent in the long term. Quality of study in the initial stages makes the difference between an excellent and an average student. The four components. Language Exchange Community - Practice and Learn Foreign Languages. Ladin language.

Ladin (Ladin: Ladin, Italian: Ladino, German: Ladinisch) is a language consisting of a group of dialects (which some consider part of a unitary Rhaeto-Romance language) mainly spoken in the Dolomite Mountains in Northern Italy in South Tyrol, the Trentino and the province of Belluno. 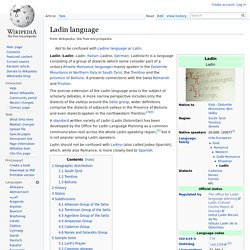 It presents connections with the Swiss Romansh and Friulian. The precise extension of the Ladin language area is the subject of scholarly debates. A more narrow perspective includes only the dialects of the valleys around the Sella group, wider definitions comprise the dialects of adjacent valleys in the Province of Belluno and even dialects spoken in the northwestern Trentino.[3][4] A standard written variety of Ladin (Ladin Dolomitan) has been developed by the Office for Ladin Language Planning as a common communication tool across the whole Ladin-speaking region,[5] but it is not popular among Ladin speakers. 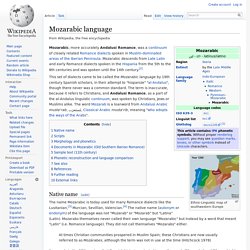 Mozarabic descends from Late Latin and early Romance dialects spoken in the Hispania from the 5th to the 8th centuries and was spoken until the 14th century.[2] This set of dialects came to be called the Mozarabic language by 19th century Spanish scholars, in their attempt to "hispanize" "al-Andalus", though there never was a common standard. The term is inaccurate, because it refers to Christians, and Andalusi Romance, as a part of the al-Andalus linguistic continuum, was spoken by Christians, Jews or Muslims alike. The word Mozarab is a loanword from Andalusi Arabic musta'rab, مُستَعرَب, Classical Arabic musta'rib, meaning "who adopts the ways of the Arabs". Native name[edit] The Early Romance of Moslem Spain was known to its users as latinus. Irish Language Irish culture and customs - World Cultures European.

Bunús na Gaeilge - Basic Irish Language There is no other way to revive Irish than for a crowd of people to spread it. - Douglas Hyde On these pages, we will make a valiant effort to provide you with useful words and phrases. 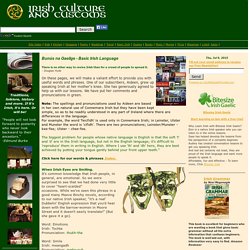 One of our subscribers, Aideen, grew up speaking Irish at her mother's knee. She has generously agreed to help us with our lessons. We have put her comments and pronunciations in green. Note: The spellings and pronunciations used by Aideen are based in her own natural use of Connemara Irish but they have been kept simple, so as to be readily understood in any part of Ireland where there are differences in the language. English Translation of Tagalog Word. Gigil trembling or gritting of the teeth in response to a situation that overwhelms your self-control When a Filipina sees a baby that's so cute, she gets so overwhelmed that she wants to pinch the baby's cheeks and has a hard time controlling herself. 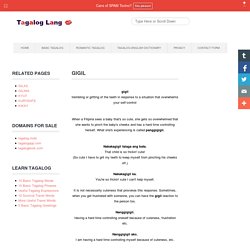 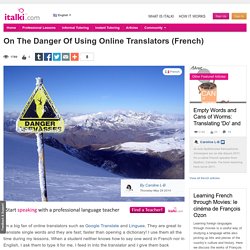 They are great to translate single words and they are fast; faster than opening a dictionary! I use them all the time during my lessons. When a student neither knows how to say one word in French nor in English, I ask them to type it for me, I feed in into the translator and I give them back translation that I think fits best with the sentence they had started. I even use it when I (of all people!)

Forget how to say something in French. But, online translators have to be used sparingly. Fluent in 3 months plus. Why German is Easy is an approach to learning German. 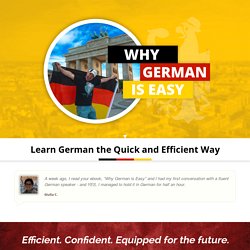 You'll pick up simple shortcuts you can use to be confident at speaking German even if you don't have a perfect vocabulary and grammar. But it IS a completely new way of thinking about how to learn German. You'll learn the exact shortcuts I used to become a confident and fluent German speaker in three months. Pobal Eolas Ilmheáin Gaeilge. InterPals Penpals - Make friends online and find free pen pals from around the world!

Southern Sotho language, alphabet and pronunciation. Southern Sotho is one of the official languages of South Africa and is a member of the Bantu/Nguni family of languages. 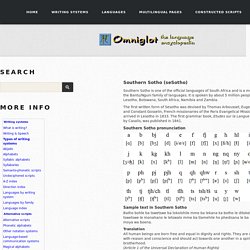 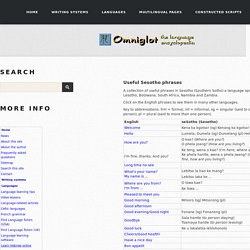 Click on the English phrases to see them in many other languages. Key to abbreviations: frm = formal, inf = informal, sg = singular (said to one person), pl = plural (said to more than one person). If you would like to make any corrections or additions to this page, or if you can provide recordings, please contact me. Information about Southern Sotho / Sesotho | Sesotho phrases | Tower of Babel in Sesotho Links Other collections of Sesotho. 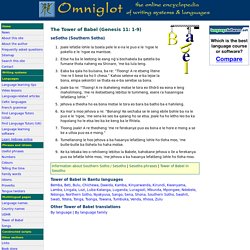 Classification[edit] Sotho is a Southern Bantu language, belonging to the Niger–Congo language family within the Sotho languages branch of Zone S (S.30). It is most closely related to other major languages in the Sotho–Tswana language group: Tswana (Setswana), the Northern Sotho languages (Sesotho sa Leboa), Kgalagari (SheKgalagari) and Lozi (Silozi). Sesotho is, and has always been, the name of the language in the language itself, and this term has come into wider use in English since the 1980s, especially in South African English and in Lesotho.

Lewis, William. 2007-06-27. Demuth, Katherine. 1978. OLAC resources in and about the Southern Sotho language. ISO 639-3: sot The combined catalog of all OLAC participants contains the following resources that are relevant to this language: Other known names and dialect names: Sesotho, Sisutho, Southern Sotho, Souto, Suthu, Suto, Taung Use faceted search to explore resources for Southern Sotho language. Home - Embassy of the Kingdom of Lesotho in Ireland. Windows Phone Apps+Games Store (Ireland) #Add1Challenge. Speak from day 1. You don’t have to be “gifted” to learn a new language, but you do have to be smart about how you learn it. Hi! When you’ve watched the video above and are ready to join the thousands of other language hackers who are using the Fluent in 3 Months PREMIUM package as an unconventional approach to learn languages quickly, click the button below.

If you’ve got any questions after watching the video, check out the “Frequently Asked Questions” page. I’ve tried to answer every possible question you might have on that page, including ones I get a lot such as: “What if I’m not good at learning languages?” And “What if I don’t have enough time?” If you’re still skeptical, check out the ‘In Action’ page to see my TEDx talk, viral video with over 150,000 views, videos of me speaking these languages with natives, and various stories and videos from language hackers who have gone through the package.

My mission is to get more people speaking more languages faster. I Learned to Speak Four Languages in a Few Years: Here's How. Multi-lingual language learning and language exchange. Fluent in 3 months – Language Hacking and Travel Tips — Unconventional language hacking tips from Benny the Irish polyglot; travelling the world to learn languages to fluency and beyond! Penpal - Improve your foreign language with a penpal - Penpalscommunity.com. How to do a pen pal exchange in foreign language class. February 4, 2013 by bilinguish Happy Thank a Mailman Day! (Photo credit: cascade hiker) February 4th is Thank a Mailman Day. We’re honoring our mail men, mail women, and postal workers with a favorite topic for language class: the pen pal exchange.

Learn & Practice English, French, Spanish and More with Partners Around the World. Conversation Exchange - Language learning with native speakers. Learn Second Language with Pen Pal. MyHappyPlanet and like websites for learning a second language have broadened the possibilities for effective acquisition.

Learning a second language can be a frustrating experience, but one of the most difficult aspects is not having anybody with whom you can practice. International Penpals (Pen Friends) - Email Exchange of Language and Cultures. InterPals Penpals - Make friends online and find free pen pals from around the world! Links to websites about language exchange. How to learn any language in six months: Chris Lonsdale at TEDxLingnanUniversity. 5 techniques to speak any language: Sid Efromovich at TEDxUpperEastSide. Hacking language learning: Benny Lewis at TEDxWarsaw. DELF and DALF Exam Preparation Tests: Free practice materials (Delf A1, A2, B1, B2 – Dalf C1, C2) « IOMC Blog.

DILF, DELF, and DALF are a set of official French proficiency tests administered by the Centre International d’Etudes Pédagogiques (CIEP). Each year, many medical students or researchers who wish to pursue their undergraduate or post graduate studies in French speaking countries and/or universities or wish ti immigrate, take DELF Exam. DELF (Diplôme d’études en Langue Française) exam consists of 4 sections of Listening, Reading, writing, and Speaking. DELF has 4 levels of A1, A2, B1, and B2, as it follows: DELF A1: This level recognises basic knowledge and is the most basic level at which a language is used.

You'll see for yourself how much information is contained in each lesson. If you have already registered, you can purchase Download Credits for access to more lessons. Pronunciation: another look at the French alphabet This lesson takes another look at the alphabet, and concentrates especially on the distinction between the letters 'E' and 'I', as well as between 'G' and 'J'. How to Learn a Foreign Language Via a Language Exchange. You should practice using the Cormier method, a language exchange method that has been proven for over 3 years at the C.E.L.M. school in Montreal, Canada. Home : Afrikaans. Afrikaans language learning games. Learn Afrikaans. How to Learn to Speak Afrikaans: Step-by-Step Instructions. Afrikaans 101 - Learn Afrikaans Online for Free. The Afrikaans language. Starting to learn Afrikaans It is easier to start learning Afrikaans, or any other language, than it is to become good at it.

It can also be more fun, because when beginning you can make rapid progress without learning grammar or trying to learn words which only occur infrequently. Learning a language can vary from knowing ten words to fluency. It all depends on your goal. Afrikaans language, alphabet and pronunciation. About the Embassy - Embassy of the Kingdom of Lesotho in Ireland. Useful Sesotho (Southern Sotho) phrases. Sesotho Online - information on the Southern African language Sesotho (Southern Sotho) 9 Tips on How to Learn Sesotho. Learn Sotho: Language-Learning Software & Online Language Classes. Sotho grammar. Sotho phonology.

Learn something new every day - Memrise. Top Sites for Countries and Cities. Verbling - Learn a language. How to Successfully Learn a New Language This Year. Join for Free Now. Anki - friendly, intelligent flashcards.