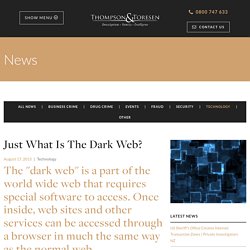 August 17, 2015 | Technology The "dark web" is a part of the world wide web that requires special software to access. Once inside, web sites and other services can be accessed through a browser in much the same way as the normal web. However, some sites are effectively "hidden", in that they have not been indexed by a search engine and can only be accessed if you know the address of the site. Special markets also operate within the dark web called, "darknet markets", which mainly sell illegal products like drugs and firearms, paid for in the cryptocurrency Bitcoin. There is even a crowdfunded "Assassination Market", where users can pay towards having someone assassinated. Because of the the dark web's almost total anonymity, it has been the place of choice for groups wanting to stay hidden online from governments and law enforcement agencies.

There are a number of ways to access the dark web, including the use of Tor, Freenet and I2P. Chen Palmer - New Zealand Public and Employment Law Specialists. A recurring problem for media lawyers is advising clients who are the victims of online smear attacks. 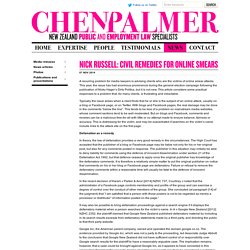 This year, the issue has had enormous prominence during the general election campaign following the publication of Nicky Hager’s Dirty Politics, but it is not new. This article considers some practical responses to a problem that, for many clients, is frustrating and intractable. Typically the issue arises when a client finds that he or she is the subject of an online attack, usually on a blog or Facebook page, or on Twitter. With blogs and Facebook pages, the real damage may be done in the comments “below the line”. This tends to be less of a problem on mainstream media websites, whose comment sections tend to be well moderated. Defamation as a remedy. A right to be forgotten for New Zealand? The biggest thing in the privacy world just now seems to have exploded into the collective consciousness out of nowhere. 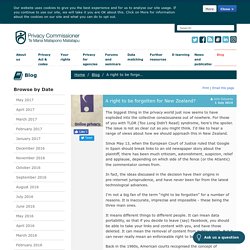 For those of you with TLDR (Too Long Didn’t Read) syndrome, here’s the spoiler. The issue is not as clear cut as you might think. I’d like to hear a range of views about how we should approach this in New Zealand. Since May 13, when the European Court of Justice ruled that Google in Spain should break links to an old newspaper story about the plaintiff, there has been much criticism, astonishment, suspicion, relief and applause, depending on which side of the fence (or the Atlantic) the commentator comes from. In fact, the ideas discussed in the decision have their origins in pre-internet jurisprudence, and have never been far from the latest technological advances. I’m not a big fan of the term “right to be forgotten” for a number of reasons. It means different things to different people.

A similar notion was behind the creation of a tort of privacy in New Zealand. The Google Case: When Law and Ethics Collide. A fundamental precept for international companies is compliance with the law of the nation in which they do business. 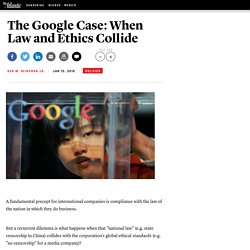 But a recurrent dilemma is what happens when that "national law" (e.g. state censorship in China) collides with the corporation's global ethical standards (e.g. "no censorship" for a media company)? The answers are not easy--or uniform. They depend, greatly, on the corporation's deeply held values and on strongly held views of important stakeholders (shareholders, creditors, employees, customers, suppliers). The recent Google announcement about re-evaluating its business in China demonstrates how acute the dilemma can be. For example, when a Web-surfer searched "Tiananmen Square" on Google's Chinese language Web site in Los Angeles, reports of the 1989 demonstrations popped up. Yesterday, Google reversed course.

As a result, Google said it plans to review "the feasibility of our Chinese operations. " The reason for Google's switch? Photo credit: Guang Niu/Getty Images.