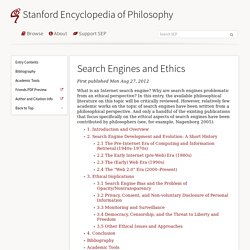 Introduction and Overview It may be difficult to imagine today's world without search engines. Which high school student—at least one living in North America or Europe—has not used a Web search engine to query about some topic or subject? Of course, it is quite possible that many Internet users, both young and old, do not consciously distinguish between the search engines they use and Web browsers that now also typically include search engines as a feature within their user interface. But virtually all Internet users have come to expect and depend on the instantaneous results they receive in response to their various search queries. We begin with a brief sketch of the history and evolution of search engines, from their conception in the pre-Internet era to the development and implementation of contemporary (“Web 2.0” era) search engines such as Google. 2. 2.1 The Pre-Internet Era of Computing and Information Retrieval (1940s–1970s) 2.2 The Early Internet (pre-Web) Era (1980s) 3. 4.

Privacy Issues of the Internet Search Engines - In the Light of EU Data Protection Legislation. Google's Ad System Has Become Too Big to Control. Google is one of the most advanced search and advertising platforms on the Internet, but a research paper suggests the company may lack the ability to keep discriminatory and privacy policy-violating advertisements off its services. 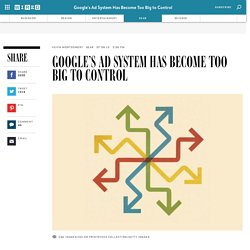 Research conducted by three computer scientists from Carnegie Mellon University and the International Computer Science Institute discovered that Google’s AdSense platform is capable of discriminating against women looking for employment and targeting consumers based on their health information. Using an automated tool they built called AdFisher, the research team utilized more than 17,000 simulated user profiles across 21 experiments to analyze how different user traits defined by Google’s Ad Settings would impact which ads were served. 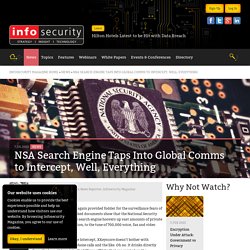 According to a report in The Intercept, XKeyscore doesn’t bother with intercepting last-mile telephone calls and the like. Oh no. In other words, it absorbs everything. Google decision - good for gangstas, but not in New Zealand - Publications - Chapman Tripp. ​A decision by the European Court of Justice, which allows people to request that internet information is pulled if historic or no longer relevant, has been seized upon by European criminals to have Google remove links to their criminal records. 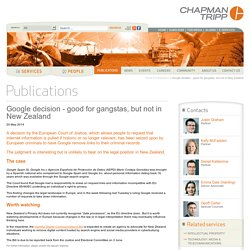 The judgment is interesting but is unlikely to bear on the legal position in New Zealand. Google Pays $17 Million to Settle Apple Safari User Tracking Case. Google has agreed to pay a settlement of $17m to 38 US states in order to end a probe into claims that it deliberately bypassed user privacy settings in Apple’s Safari browser. 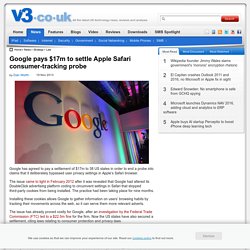 The issue came to light in February 2012 after it was revealed that Google had altered its DoubleClick advertising platform coding to circumvent settings in Safari that stopped third-party cookies from being installed. The practice had been taking place for nine months. Installing these cookies allows Google to gather information on users’ browsing habits by tracking their movements across the web, so it can serve them more relevant adverts.

The issue has already proved costly for Google, after an investigation by the Federal Trade Commission (FTC) led to a $22.5m fine for the firm. Now the US states have also secured a settlement, citing laws relating to consumer protection and privacy laws. WPF Analysis: Implications of the Google Spain Case. The analysis, Decision in Europe: Controversial Revival of Practical Obscurity, Implications of the Google Spain Case, was published May 20, 2014. 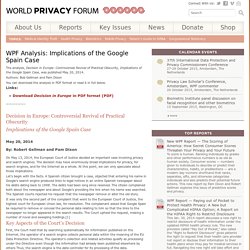 Authors: Bob Gellman and Pam Dixon You can download the analysis in PDF format or read it in full below. Links: Download Decision in Europe in PDF format (PDF) May 20, 2014 By: Robert Gellman and Pam Dixon On May 13, 2014, the European Court of Justice decided an important case involving privacy and search engines. Let’s begin with the facts. From Search Engines to Smartphones, Technology Gets a Privacy Overhaul. As the reach of the Internet has grown, so has the medium’s favored business model: targeted advertising. 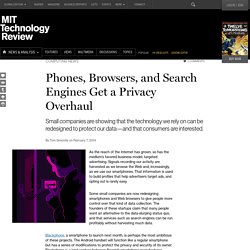 Signals recording our activity are harvested as we browse the Web and, increasingly, as we use our smartphones. That information is used to build profiles that help advertisers target ads, and opting out is rarely easy. Some small companies are now redesigning smartphones and Web browsers to give people more control over that kind of data collection. The founders of these startups claim that many people want an alternative to the data-slurping status quo, and that services such as search engines can be run profitably without harvesting much data. Blackphone, a smartphone to launch next month, is perhaps the most ambitious of these projects. Javier Agüera, cofounder and chief technology officer of Geeksphone, stresses that the device is not intended to be “NSA-proof.”

To that end, the Web browser on the Blackphone will, by default, block ad-tracking technology served up by websites. 003_tavani.