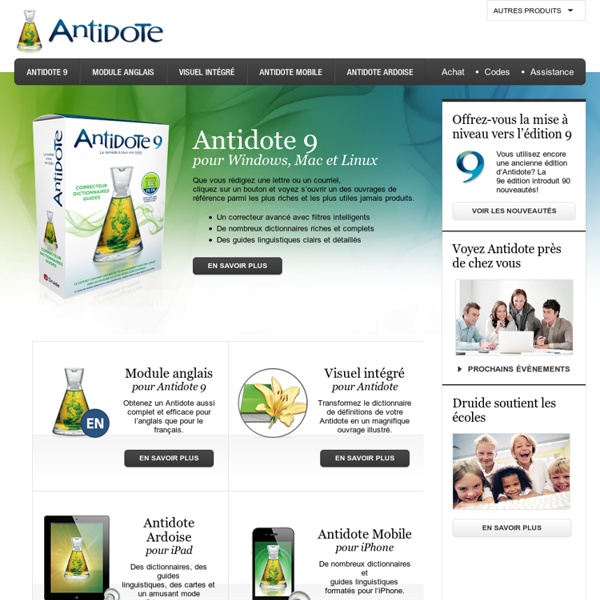 PageFour - Software for Novelists and Creative Writers - Tabbed Word Processor, Outliner, and Organizer Because it's NOT a business product. Because it doesn't dazzle you with 1001 features that you'll never use. Because you can't insert a graph, or embed a table within a table. PageFour was designed creatively for creative writers. Organize your work in a way that suits you. Place your character summaries and plot outlines wherever you wish.

Junkware Removal Tool Download Screenshots for Junkware Removal Tool BleepingComputer Review: Junkware Removal Tool is a security utility that searches for and removes common adware, toolbars, and potentially unwanted programs (PUPs) from your computer. A common tactics among freeware publishers is to offer their products for free, but bundle them with PUPs in order to earn revenue. This tool will help you remove these types of programs. atom-tm.com Atom™ & Marc Behrens//Bauteile CD Out now on Editions Mego. The over 70 minutes of «Bauteile» (German for «construction parts») were recorded from 1987 through 2013 and edited into a continuous flow over the last three years. Atom™ and Marc Behrens met during the heyday of the German Techno movement and have since ever pursued extensive research in all areas of contemporary music. Their findings, a sonification of their investigations, which span effectively two centuries of musical development, are now released as an album for the first time by Editions Mego. Project website

45 Best Free Design Apps In a previous post I gave you a list of 85+ Free Killer Resources Every Designer Should Know, which had a great response. Now, in the same line, I have brought together 45 Freeware Design Programs among literally thousands and thousands. It was a great quest, and it was worth it. Transmit - The ultimate Mac OS X FTP + SFTP + S3 app How do you make Transmit 4 the best ever? 45+ new features, up to 25x speed, and one more thing… You need to transfer files. Maybe to an FTP or SFTP server, or the cloud via Amazon S3, or using WebDAV. You maintain a website, do backups, or upload photos. You need Transmit, the #1 Mac OS X FTP client.¹ Now, in Transmit 4, we took everything good about Transmit, and added a dollop of unbelievably great.

Draw Freely. Inkscape at the Libre Graphics Meeting April 12, 2014 The Inkscape project mustered nine developers, translators and document writers for a productive meeting. As well as countless user interactions over the course of the five day event. This is what happened... K9 Web Protection It requires very little disk space, memory, or processing power. We recommend that you have about 25 MB of free disk space available for log files. You will need a K9 Web Protection license before you install the software.

26 Best Free Handwritten Fonts Mostly people are using stylish and modern fonts in design work and often miss out the handwritten fonts, I particularly like to use handwritten fonts to highlight significant items in screen captures. These handwritten fonts are drawn using any kind of writing instrument like pen, pencil, felt marker, brush, etc. Typography is the very import part of any design project and Free Fonts has always been a fundamental aspect of stylish headlines, typography and poster design, but many designers are now making type the centerpiece of their designs. Not only is typography becoming the design, but type is being pushed to the limits by being used in cool new ways such as Best Free Fonts.

Keyboard Maestro 6.0: Work Faster with Macros for Mac OS X More Macro Triggers Trigger your macros with hot keys that are down, pressed, released, or tapped multiple times. Or trigger with a change in window focus or folder or clipboard. Insert Action by Name Press a hot key, and then type in part of the name of an action to see a list of possibilities. Press Return or double click to insert it.