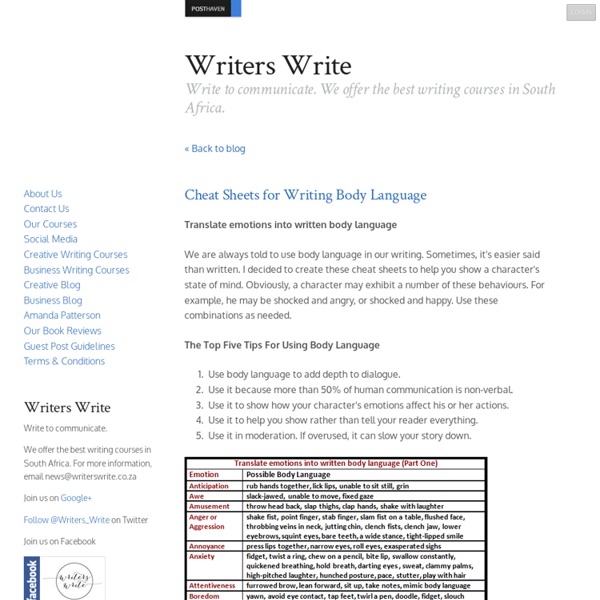 Translate emotions into written body language We are always told to use body language in our writing. Sometimes, it's easier said than written. I decided to create these cheat sheets to help you show a character's state of mind. Obviously, a character may exhibit a number of these behaviours. For example, he may be shocked and angry, or shocked and happy. The Top Five Tips For Using Body Language Use body language to add depth to dialogue. If you want to learn how to write a book, join our Writers Write course in Johannesburg. Even if you're not busy with a book, prompts are an excellent way to exercise the writing muscle. If you enjoyed this post, read:

10,000-Year Calendar! Get out the nice paper for these photo calendars! Monthly and yearly calendars available! 100's of artworks and photos available! Old Computers: 06/09/2011, Behind the News Steve Jobs is a name that you might not know but it's pretty likely you've seen his products. He's the co-founder of Apple and recently stepped down as the company's boss. And he played a big role in making computers what they are today. How to Write a Flat Character Arc, Pt. 1: The First Act Next to the positive change arc, the flat character arc is the most popular storyline. Also called the “testing arc,” the flat arc is about a character who does not change. He already has the Truth figured out in the beginning of the story, and he uses that Truth to help him overcome various external tests. The flat-arc protagonist will be confronted with tremendous opposition. He will at times be shaken. His commitment to the Truth will be tested to the breaking point—but he will never waver from it.

11 questions that only mean something in Ireland SERIOUSLY. IN ANY other country, you’d get some fierce blank looks. It’s a special kind of Irish nonsense. 1. The 8 Minutes That Matter Most I am an English teacher, so my ears perk up when writers talk about their process. I've found the advice handy for lesson planning, too. That's because both writing and planning deal with craft. In writing, you want your audience to be absorbed. Writing Killer Fight Scenes Fight scenes are dangerous territory for writers. On the surface, they seem as if they’re guaranteed to keep the reader glued to the action in the same way as they often do at the movies. In reality, though, readers tend to skip over fight scenes – skimming the long, tedious, blow-by-blow descriptions in favour of getting back to the dialogue and character-driven drama that truly engages them in the story. My novel, Traitor’s Blade, is a swashbuckling fantasy in which fight scenes are a crucial part of the storytelling.

Ten Secrets To Write Better Stories Writing isn’t easy, and writing a good story is even harder.10 I used to wonder how Pixar came out with such great movies, year after year. Then, I found out a normal Pixar film takes six years to develop, and most of that time is spent on the story.9 In this article, you’ll learn ten secrets about how to write a story, and more importantly, how to write a story that’s good.

Mysteries VOCABULARY AROUND THE GENRE - Definitions: matching exercises - Drag and drop exercises on Criminals - Crosswords: Crime by Pascal Lapierre , ac-nantes LAMB TO THE SLAUGHTER, Roald Dahl SILENT NIGHT, Mary Higgins Clark 20 Best Websites To Download Free EBooks We understand that reading is the simplest way for human to derive and constructing meaning in order to gain a particular knowledge from a source. This tendency has been digitized when books evolve into digital media equivalent – E-Books. It would be nice if we’re able to download free e-book and take it with us.

Create A Plot Outline In 8 Easy Steps By Glen C. Strathy How would you like to create a plot outline for your novel in less than an hour that is emotionally compelling and dramatically sound? Drunk, violent, promiscuous... a U.S. view of British youth as seen on the cover of Time Magazine By EMILY ANDREWS Last updated at 10:20 29 March 2008 British youth are violent, drunken and out of control, a leading American magazine concludes today. The front cover of renowned publication Time Magazine depicts a young man in a "hoodie" with mugshots of others across a Union Jack. Its headline reads: "Unhappy, Unloved and Out of Control - An epidemic of violence, crime and drunkenness has made Britain scared of its young."