This Infographic Reveals the Secrets of the Happiest Couples 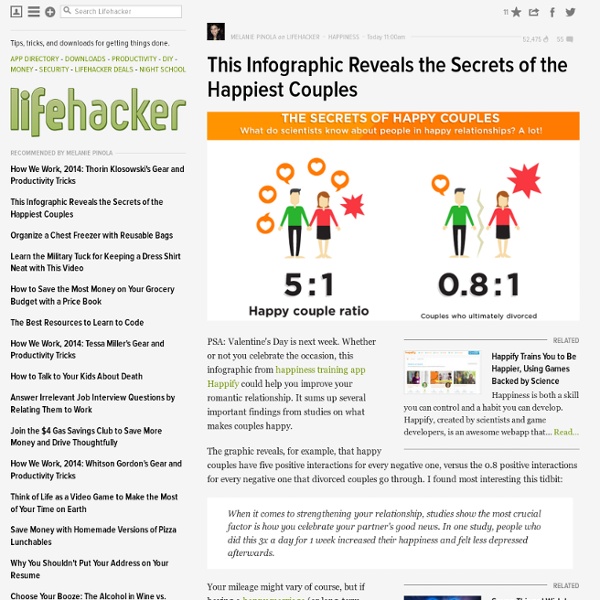 How to Merge Finances When You Get Married (Without Going Crazy) Russell Bishop: Soul-Talk: How to Rise Above Your Negative Emotions How do you respond when negative emotions show up in your life? Do you wind up adding even more negativity to the already-not-so-great feelings? If this sounds familiar, then you may need to turn down the volume on your Self-Talk and learn how to listen instead to your Soul-Talk when negative feelings show up. Most of us simply let the negative emotions run their course until we "get over it." So, what's the alternative then when your negative emotions take center stage? Do you know anyone with whom you become angry from time to time? How to Find Value in Your Negative Emotions Using our GPS for the Soul metaphor, you can use the anger that you feel as an indicator that you are off course in some way. If you drive a car, or have been a passenger in one, then you may well have experienced the kind of bumpy disruption to an otherwise relatively smooth ride that takes place if the car starts to stray from its lane. What do you do when that noise or bumpy ride shows up?

Communicate Better with Your Significant Other with These 10 Rules (17) Successful People Start Before They Feel Ready Original article: Start Before You Feel Ready In 1966, a dyslexic sixteen–year–old boy dropped out of school. With the help of a friend, he started a magazine for students and made money by selling advertisements to local businesses. Four years later, he was looking for ways to grow his small magazine and started selling mail order records to the students who bought the magazine. He rented the recording studio out to local artists, including one named Mike Oldfield. Over the next decade, the young boy grew his record label by adding bands like the Sex Pistols, Culture Club, and the Rolling Stones. Almost 50 years later, there were over 400 companies under his direction. Today, that young boy who dropped out of school and kept starting things despite his inexperience and lack of knowledge is a billionaire. How I Met Sir Richard Branson A few months ago, I walked into a conference room in Moscow, Russia and sat down ten feet from Branson. I took this photo right after he told that story.

6 Ways to Keep Long-Term Relationships Exciting The truth is, over time, our feelings in our relationships do change. The sparkly and exhilarating rush of falling in love is not permanent. But that does not mean that this feeling disappears; it simply evolves. The idea that the excitement of a relationship is sentenced to only the first months or even years a couple is together is completely false. When it comes to a long-term relationship with a partner we ourselves chose, we can maintain the thrill of being in love, and deepen our feelings of passion and intimacy. 1) Make Sure to Have Joyful Time Together The ability to laugh with one another is a true sign of vitality in a relationship. 2) Be Open to New Experiences When a relationship gets closer, couples often risk growing apart by closing off to new experiences or limiting each other in certain ways. 3) Show Your Love, Don’t Hold Back Love doesn't exist unless it is treated as a vital and living force between two people. 4) Keep Your Identity as an Individual

15 Things You Should Give Up To Be Happy Here is a list of 15 things which, if you give up on them, will make your life a lot easier and much, much happier. We hold on to so many things that cause us a great deal of pain, stress and suffering – and instead of letting them all go, instead of allowing ourselves to be stress free and happy – we cling on to them. Not anymore. Starting today we will give up on all those things that no longer serve us, and we will embrace change. 1. There are so many of us who can’t stand the idea of being wrong – wanting to always be right – even at the risk of ending great relationships or causing a great deal of stress and pain, for us and for others. 2. Be willing to give up your need to always control everything that happens to you and around you – situations, events, people, etc. “By letting it go it all gets done. 3. Give up on your need to blame others for what you have or don’t have, for what you feel or don’t feel. 4. Oh my. “The mind is a superb instrument if used rightly. 5. 6. 7. 8.

Every Couple's Key to Peace In relationships, understanding—not agreement—is the key. In employing the word understanding here, I’m not referring to some impersonal, coldly objective comprehension of your partner's—or child’s, parent’s, friend’s, or co-worker’s—viewpoint. Nor is there anything critical or judgmental about it. Rather, it’s used to signify an empathic, open-hearted appreciation of where your significant other is coming from. And such a humane understanding can be present totally independent of your own bias or perspective. However paradoxical it may seem, two opposing viewpoints can be made compatible—despite their undeniable discordance. Yes, even support—in the sense that this understanding represents a sincere, receptive acknowledgment of your partner’s contrasting position. Although your integrity may not permit you to concur with their position, there’s no reason you can’t recognize its subjective validity—from their own equally sincere, genuine, and authentic viewpoint. © 2014 Leon F.

Why Forgiveness Is Power? To forgive is the highest, most beautiful form of love. In return, you will receive untold peace and happiness. ~Robert Muller Do you consider yourself to be a forgiving or resentful person? If somebody has hurt you in the past or did something to make you suffer, would you hold on to those past events, thoughts and feelings, or would you just let them go? I always say that where there is anger, hate, revenge, bitterness, there is also a lot of pain underneath, and I really believe that to be true. I know it’s a lot easier to give back exactly what you receive, and in this case, a lot of negativity, but we don’t want to do what’s easier, but rather what is best for our health, well being and also of those around us. Just think about it. I guess it’s time for you to stop, don’t you think? For every minute you are angry you lose sixty seconds of happiness. Anger will never disappear so long as thoughts of resentment are cherished in the mind. Who is the person that mistreated you?

Legend Of Zelda Engagement Rings And Wedding Bands I actually posted a shot of one of these in the Batman engagement ring post last week, but now Takayas Custom Jewelry has taken the time to make some renderings of the rings that aren't so, how should I put this-- "Shitty looking." Exactly. You know, sometimes I feel like you live inside my brain. Hit the jump for a couple more shots including some Hylian crest and Triforce wedding bands. Thanks to PYY, who agrees the best engagement rings are true love themed.

The OTHER 15 Ways I Blew My Marriage Almost two weeks ago, I told you all about my family’s tradition of going around the room and having everyone give their best marriage advice to the bride and groom on the eve of their wedding. While sitting in that circle on the night before my sister’s nuptials, I felt so valueless having been divorced not just once but twice. Not a lick of what I had was good marriage advice. No. So, after an awesomely failed joke and an evening of feeling like the biggest turd on earth, I sat down for a few hours and wrote my own advice list to my sister (and probably even more so for myself). I never, not even once, thought that post would be popular. And maybe in the end, that is the “why.” That being said, I’m so thankful that so many people found value in it and shared it. Anyways… with that, I give you: The OTHER 15 Ways I Blew My Marriage(continued from previous blog post) When I was wooing her, I made it a point to show up with flowers. BONUS! BONUS! BONUS! BONUS!

16 Ways I Blew My Marriage You know what blows big time? The other night I was sitting with my family, most of whom are very successfully married. We were going in a circle giving our best marriage advice to my little sister on the eve of her wedding. It’s somewhat of a family tradition. But that’s not what blows. And so, when it was my turn, I just made a joke about divorce and how you should always remember why you loved your spouse when you first met her so that when times get tough, you can find someone new that is just like she was. There were a couple courtesy giggles, but overall my humor wasn’t welcome in such a beautifully building ring of profundity. They finished round one, and for some reason started into another round. It eventually came to me again, and what I said would have been such great advice if I were a tenth as good at saying things as I was at writing them. And so, that night, I sat down and wrote out my “advice list” for my little sister. I call it my “Ways I Blew My Marriage” list. BONUS!