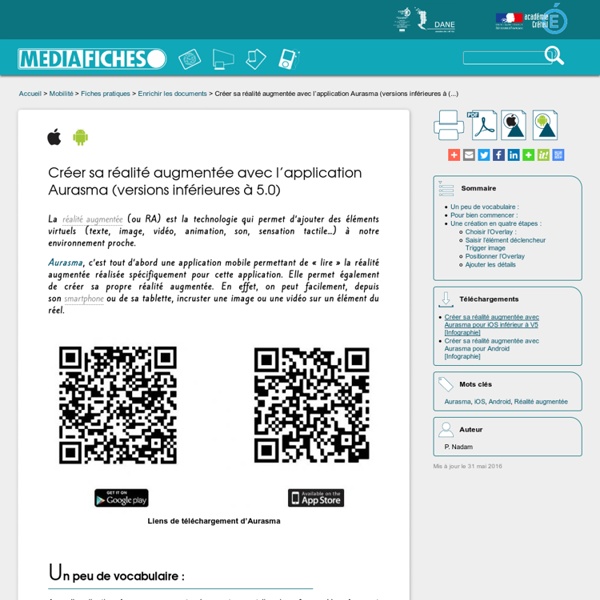 How to Use Padlet in the Classroom: A Fantastic Teaching Tool Padlet is a versatile, easy to use tool for every teacher’s toolkit. Let’s dive into Padlet and Learn the Basics. At the bottom of this post, I have a Padlet that is temporarily open for you to post and share your favorite edtech tools. Features Easily drag & dropengaging content With the Layar Creator, you can enhance flyers, postcards, packaging or any other item with interactive content, including video messages, Web and social links, photo slideshows, music clips and much more! Transform everyday objects into… A multimedia player

2.0 is out! Today we’re introducing Pearltrees 2.0, a major evolution of Pearltrees that makes it simpler, more beautiful and more accessible than ever. With this new version you’ll be able to organize, explore and share everything you like with even more power and ease. Let us introduce you to the “Dynamic Grid”, the “Extended Drag-and-Drop”, “full HTML5” and several other surprises we’ve prepared for you in this version!

Aurasma and ChatterPix: A fun way to bring photos to life with augmented reality! I recently discovered the ChatterPix app (FREE) by Duck Duck Moose and instantly knew I wanted to use it to make photos of my students come to life. When I showed it to the kids, they thought it was absolutely hilarious! Here is Duck Duck Moose’s video which illustrates how it works: In Science, my class has been investigating paper and its properties. One of these invesigations involved writing on two different types of paper and then talking about which was easier/harder to write on and why.

10 Best Augmented Reality Apps Augmented reality (AR) is a live, direct or indirect, view of a physical, real-world environment whose elements are augmented by computer-generated sensory input such as sound, video, graphics or GPS data. Augmented reality has many applications, and many areas can benefit from the usage of AR technology. It was initially used for military, industrial, and medical applications, but was soon applied to commercial and entertainment areas as well. The mobile Augmented Reality (AR) world consists largely of two different types of experiences: Geolocation and Vision based augmented reality.

ARToolKit Home Page ARToolKit is a software library for building Augmented Reality (AR) applications. These are applications that involve the overlay of virtual imagery on the real world. For example, in the image to the right a three-dimensional virtual character appears standing on a real card. It can be seen by the user in the head set display they are wearing. When the user moves the card, the virtual character moves with it and appears attached to the real object. Goedel's Theorem and Information Contact us AskAuckland Page Not Found The requested URL was not found on this server. If you entered the URL manually please check your spelling and try again. Alternatively, you might like to try searching The University of Auckland website for the information you were looking for or visitThe University of Auckland homepage.

QR Codes in the Classroom QR (Quick Reader) Codes are like bar codes to quickly connect you to text, websites, audio clips, videos, etc.QR Code Reader The device will need a QR Code Reader. My current favorite is still i-Nigma because I've found that audiences typically do not need to leave their seats to scan the QR Code from the screen I'm presenting from, while other readers have not been as reliable. Augmented Reality in Education String Augmented reality is a 3D learning environment which connects real and virtual world. It provides interactive tools for learning, and fosters informal learning. Besides, augmented reality increases motivation and engages learners. Above all, augmented reality is good for kinesthetic learners; it enables learners participate interactively with computer generated simulations.

Getting Started with EdPuzzle – Teachers Vs Zombies When I first began using station-rotation blended learning in my classroom, I worked in a district that had purchased licenses for Compass Learning Odyssey. Compass was mainly used as a credit recovery curriculum, but I was able to pull out specific lessons relevant to the content standards I was teaching in my traditional English 9 & 10 classes. Initially, I used these lessons during the Headphones station in my classroom. (You can learn more about the Headphones Station’s role in blended learning on this blog post.) As I began integrating more project-based learning into my classes, I discovered that sometimes I needed shorter videos or videos on topics that were not covered in Compass, such as growth mindset and 20Time project ideas. I had heard about EdPuzzle at an EdTechTeam Google Apps for Education (GAFE) Summit.

The Best Augmented Reality Apps That Aren't Pokemon Go In a very short time, Pokémon Go has pushed augmented reality (AR) into the mainstream. Its ability to overlay digital animations onto the real world using your phone's camera and screen is unlike any other popular game before it. But Pokémon Go isn't the only app that seamlessly blends virtual objects into the real world. Here are the best AR apps not linked with Nintendo.