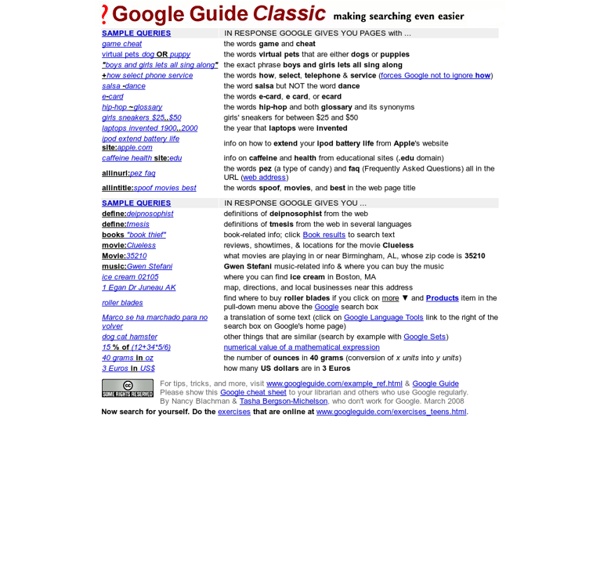 10 Important Google URLs That Every Google User Should Know Which websites and apps have background access to my Google account? What does Google know about me? Where can I see all the ads that I’ve clicked on Google search? What does Google know about the places I’ve visited recently? Where should I go if I have forgotten the administrator password for Google Apps? What are my interests as determined by Google?

40 Google Plus Tips for Newbies Ok, so at this point, we are all newbies at Google Plus, right? At least if you got in recently via a Google Plus invite. At this point I’ve spent a decent amount of time with it and have concluded that Google has finally made a positive mark in social networking. It’s still early, but there is a lot of excitement around Google+ by those who have jumped on early, and for good reason. How to use Google for Hacking Google serves almost 80 percent of all the search queries on the Internet, proving itself as the most popular search engine. However, Google makes it possible to reach not only the publicly available information resources, but also gives access to some of the most confidential information that should never have been revealed. In this post, you will find the information on how to use Google for exploiting security vulnerabilities that exists within many websites. The following are some of the ways to use Google for hacking: 1.

The Great Big Narcotics Cookbook sign up Login Paper Key Courses Three ways to use Seesaw & set up your class – Seesaw Help Center Since we've seen Seesaw used by different teachers in so many different ways, we thought it would be helpful to summarize a few typical uses we've seen and the corresponding class settings in Seesaw. We hope this will be helpful as you think about how you'd like to use Seesaw in your class and how you should set up your Seesaw class as a result. Seesaw for Feedback and Reflection Some teachers use Seesaw primarily as a place for students to share their work, and specifically encourage individual reflection and peer feedback. Seesaw becomes a place not only where student work can be stored, but where teachers and peers can provide encouragement, constructive criticism, and suggestions for improvement. An authentic audience of peers can encourage students to do their best work.

Search Google Anonymously While Logged Into Google In Firefox One of the things that keeps some users from using Google Search is the certainty that everything that is done on the site is being logged and analyzed by Google. While it is possible to overcome this, for instance by launching searches only in the browser's private browsing mode, or using search engines such as Startpage that use Google search results but do not track you, you may prefer an automated solution that just works in the background without you doing anything. You could try and use Google while you are not signed in to your Google Account, but that too means some form of tracking as there are other means besides tracking a user by account. Plus, it means that you cannot use other Google Services such as Gmail properly without signing in first again.

Less Popular Google Search Tips There’s not a day that passes by without searching for information on Google. We’re pretty sure that you’re aware of some advanced Google search operators like AND, NOT, etc. but here are some lesser known tricks that you can implement when you’re searching on Google. We bet you wouldn’t know at least one of these! 1. Free Action Plan Templates - Smartsheet A More Collaborative Action Plan Template in Smartsheet Smartsheet is a spreadsheet-inspired task and work management tool with powerful collaboration and communication features. It’s pre-built action plan template makes it even easier to track plan details, communicate status, and collaborate on key strategies.