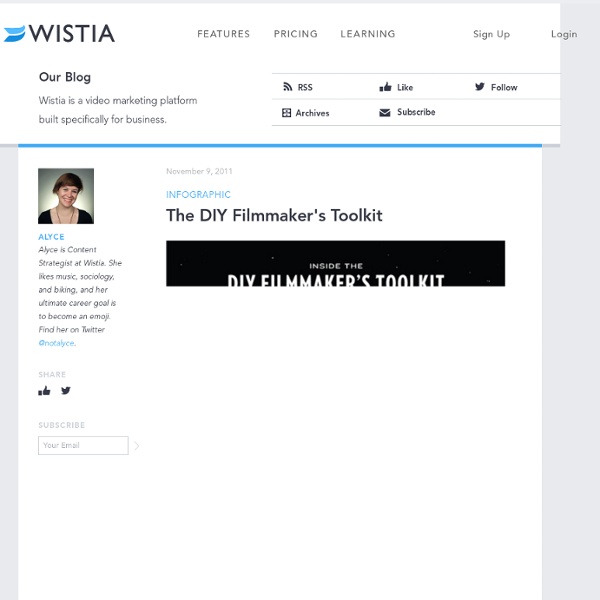 666 DIY Horror Filmmaking Tutorials It’s that time of year again, so we thought it was time to update last years killer feature “Horror Filmmaking: From Script to Scream.” That’s right a sequel! This time we are narrowing the focus a bit and concentrating on the DIY (Do It Yourself) elements. Hopefully this will help you slash the budget without murdering your production values. Empire Features - StumbleUpon 10,000 Empire readers, 150 of Hollywood's finest and 50 key film critics voted in the most ambitious movie poll evert attempted. 500. Ocean's Eleven (2001) Director: Steven Soderbergh Slick, suave and cooler than a penguin's knackers, Soderbergh's starry update of the Rat Pack crime caper not only outshines its predecessor, but all the lights of The Strip combined.Read our Ocean's Eleven review

Final Cut Pro Help Provides comprehensive instructions for setting up a Final Cut Pro editing system and using Final Cut Pro to ingest media, edit video, and output completed projects. Last updated: 2010-03 Provides a fast‑paced introduction to the main features and tasks in Final Cut Pro, encouraging hands‑on exploration for new users. Self-Reliant Film » About The Self-Reliant Film blog was started in November 2005 by Paul Harrill. The site was launched to champion small-crew, low-budget, and regional filmmaking. Soon after its beginning the blog was listed as one of indieWire’s “Blogs We Love” and has been named part of Film Festival World’s The Essential Film Blog Reader. For more about the philosophy of self-reliant film (the practice and the blog) visit the first post. In 2010 Paul Harrill and filmmaker Ashley Maynor formed Self-Reliant Film, LLC to produce and distribute new films with compelling stories, a personal sensibility, and regional character. Taken together, Harrill and Maynor’s films have screened at over 40 festivals and on five continents.

iPhones to DSLRs: The State of D-I-Y Stop Motion Filmmaking In high school, I spent a week's worth of video production classes toying with a ball of red Play-Doh and a small set of LEGO pieces. After every slight adjustment to the Play-Doh I snapped a digital photograph and made another adjustment. The little red ball grew into a tomato, complete with a green leafy hairdo and a gaping mouth used to devour an innocent LEGO man in delightful stop motion. My first and only stop motion animation, an homage to Attack of the Killer Tomatoes, was surprisingly easy to make even with the crappy equipment available in my public school a decade ago.

The Ten Best Horror Movies of 2008 Editor’s Note: As part of our Year in Review feature, we’ve tapped our resident horror expert Robert Fure for a list of the Ten Best Horror Movies of 2008. To read more of Robert’s horror reviews, check out The Coroner’s Report every Thursday. Being a horror fan is tough business and some years are worse than ever. 2008 saw its share of lame PG-13 movies (Prom Night) and an influx of crappy remade Japanese films (Shutter), in addition to having some of the more anticipated films (Trick ‘r Treat) delayed from wide release once again.

Action Cam and Camcorder Accessories Anyone with camcorder in hand, or action cam on head, has the chance to capture some pretty remarkable footage, maybe even something that could become a viral Web sensation. But there are lots of accessories available that make capturing great action footage even easier. If you’re an avid action-cam user, or know someone who is, these accessories are worth taking a look at. Some of them, such as the mounting accessories made by Flymount, can even turn a conventional camcorder into an action cam. If you don’t have an action cam just yet but would like one, you might want to invest in one that comes with lots of accessories right out of the box.

Lead the horror novice from meek to Horror Freak with The Horror Movie Beginner's Shelf A Horror Novice must be introduced to the genre carefully to keep from scarring them for life! In this first part of a trilogy The Zombie Master Lee can help with what should be on your horror beginner's shelf. When one finds something that they enjoy, human nature leads them to want to share that something with others.

Magazine - Tips & Tricks - Visual Effects: Make Your Own Smokebombs, Pg. 1 by Bob Lazar & United Nuclear By far, the most common smoke formula is the Potassium Nitrate/Sugar formula. It produces a white-gray smoke and is both easy, inexpensive & fun to make. The percentage of Potassium Nitrate and Sugar in this composition vary somewhat depending on who you ask, but the 60/40 mix listed below is pretty common. A lump of this stuff the size of your thumb produced the smoke cloud on the right in under 2 seconds. Although the two ingredients can just be finely powdered and mixed together, in recent side-by-side tests, we found that melting the two together does in fact make a superior Smoke Bomb.

1001 Movies You Must See Before You Die list Hey, upidipi!! time to update your list ;) Those are the changes for 2014 Added : 1. Nostalgia de la luz (2010) 2. Wadjda (2012) 3. Horror Filmmaking: From Script to Scream It’s that time of year, but this article is for all those filmmakers that believe Halloween lasts all year long. In past features we brought you “202 DIY Filmmaking Tutorials,” “202 Final Cut Pro Tutorials,” “202 Sony Vegas Tutorials,” among others. We now turn our attention to the dark art of Horror Filmmaking and there are just too many links to count.

How to Make Smoke & Smoke Bombs Learn different ways to make smoke or fog, smoke bombs, colored smoke bombs, and how to perform chemistry demonstrations that produce smoke. Smoke Bomb Video TutorialSmoke bombs are the easiest and safest do-it-yourself firework project. You only need two inexpensive, non-toxic ingredients and it only takes minutes to make.