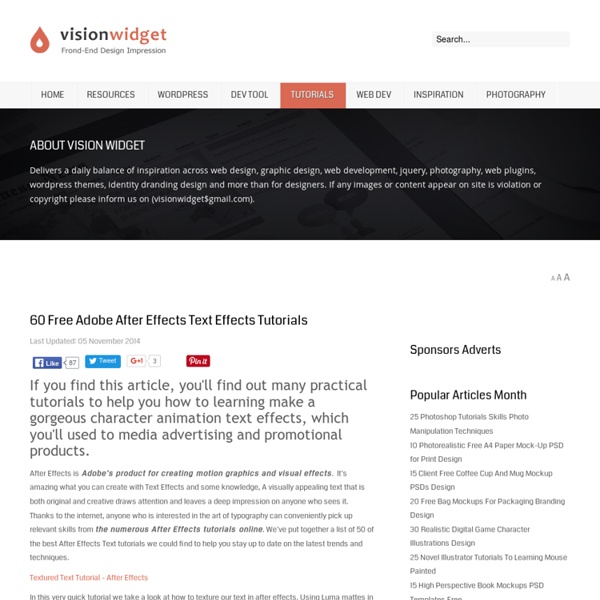 If you find this article, you'll find out many practical tutorials to help you how to learning make a gorgeous character animation text effects, which you'll used to media advertising and promotional products. After Effects is Adobe’s product for creating motion graphics and visual effects. It’s amazing what you can create with Text Effects and some knowledge, A visually appealing text that is both original and creative draws attention and leaves a deep impression on anyone who sees it. Thanks to the internet, anyone who is interested in the art of typography can conveniently pick up relevant skills from the numerous After Effects tutorials online. We’ve put together a list of 50 of the best After Effects Text tutorials we could find to help you stay up to date on the latest trends and techniques. In this very quick tutorial we take a look at how to texture our text in after effects. This tutorial will teach you how to use a lens flare in an original way. Related:  Pearltrees tips • After Effects

30 Free Plugins and Filters for After Effects Build up your post production library with the the best free plugins and filters for AE! Take your After Effects work to the next level with these free plugins and filters. From color presets to advanced lighting and 3D tracking, these free AE effects can enhance your projects and save you time. Let’s dig in… 3DCG – Normality & Atlas Normalityis a free lighting and shading plugin for After Effects. Normality in Action (from 3DCG) Atlas is a free tone-mapping/HDR plugin for After Effects – bring out loads of detail in your video footage. Atlas in Action (from 3DCG) Digital Anarchy’s Ugly Box Make your talent uglier! Noise Industries Free AE Plugins When you install FXFactory by Noise Industries (free) you’ll have access to several free After Effects plugins. Swish pans are a popular choice for transitions in television programs. Pan and Zoom is another FXFactory based After Effects plugin. Create unique effects with the Random Text generator from Luca Visual FX. Copy Image Plugin for AE

After Effects CS6 New Environment Layer & 3D Features | CGMOTIONBOX Liked this video ? Don't forget to rate In this tutorial “Eran Stern” going to show you The new 3D features in After Effects CS6 using CC Environment effect and the new Environment Layer. From Eran: After Effects CS6. Fusion 7 now free and coming to Mac: complete version of the After Effects and Nuke rival given away by Blackmagic Want to get your hands on a new VFX tool without spending a penny? Well, today Blackmagic has surprised the video industry by releasing the brand new version of Fusion for free. Download Fusion 7 for Windows for free. Update: Fusion 7 is coming to the Mac. There are two versions of Fusion 7. Fusion 7 features an infinite 3D workspace and a node based workflow for quickly building unlimited effects. Fusion 7 also lets customers import and render 3D geometry and scenes from other applications as well as create their own elements from scratch. The software has been used in many Hollywood blockbusters, TV series and high-end commercials, but tended to be restricted to the elite end of the visual effects market. Blackmagic dramatically bought Fusion-developer Eyeon just prior to IBC in September when Fusion 7 was entering its final stages of development. "From a company point of view anything that gives the best artists the tools they need is welcome," Moore told us.

20 Useful After Effects Tricks You May Not Know - The Beat: A Blog by PremiumBeat In After Effects it’s not uncommon to find new features each time you sit down to work on a project. Often these hidden features can save you TONS of time if you implement them into your AE workflow (see #19). In the following video tutorial created by Sergei Prokhnevskiy he showcases 20 useful tricks that can save you time in After Effects. Rather read than watch? We’ve listed each of Sergei’s tips below. 1. By right-clicking a keyframe and hitting ‘keyframe velocity’ you can open up a submenu that gives you easier controls over interpolation (this is arguably easier to use than the graph editor). 2. The Mini-Flowchart can be seen by clicking the tab key while in After Effects. 3. The align tools allow you to center and align objects along varying axis and keep equal spacing. 4. Select the image you want to replace in your timeline and Option+Control+Click and drag the desired replacement image into the preview panel or simply hit Option+Control+/. 5. 6. 7. 8. 9. 10. 11. 12. 13. 14. 15.

eco DIY Collection recycled cardboard electric without batteries animals environment The Eco DIY Collection is a series of products that use recycled cardboard as structural material. Every item is a flat 2d pattern cut from a single sheet paper to save material during production. The main characteristic of the collection is that the items are assembled DIY by the user simply following the instructions on the packaging: fold the paper along the notches and impressed creases applied on the paper, no glue, cutting or other instruments are required. The cardboard material and the flat structure result in these products being lightweight. The products can be easily flat-packed to be transported. Once the products have been mounted they look like 5 different endangered species of animals. *Designed by Eduardo Alessi