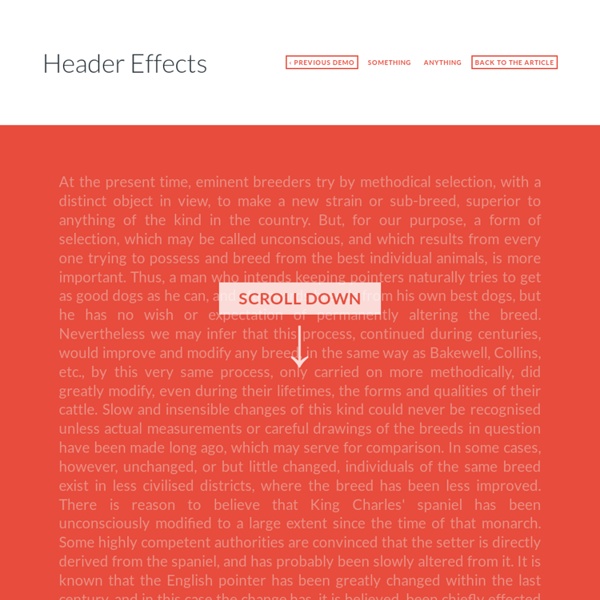 At the present time, eminent breeders try by methodical selection, with a distinct object in view, to make a new strain or sub-breed, superior to anything of the kind in the country. But, for our purpose, a form of selection, which may be called unconscious, and which results from every one trying to possess and breed from the best individual animals, is more important. Thus, a man who intends keeping pointers naturally tries to get as good dogs as he can, and afterwards breeds from his own best dogs, but he has no wish or expectation of permanently altering the breed. Nevertheless we may infer that this process, continued during centuries, would improve and modify any breed, in the same way as Bakewell, Collins, etc., by this very same process, only carried on more methodically, did greatly modify, even during their lifetimes, the forms and qualities of their cattle. Scroll down

Flat design casts a long shadow Whilst many designers embrace flat design wholeheartedly, it seems a growing number have already tired of its charms and are casting around for the next big thing. One contender, being championed by some, is “long shadow” design. Long shadow design produces an effect like looking at an object late on a Winter’s day, when the shadows lengthen to dramatic proportions. The effect adds a great deal of depth while still retaining an essentially flat aesthetic. Typified by a 45 degree shadow that extends well beyond the length of a traditional drop shadow, the diagonal lines are reminiscent of early Soviet posters and collages by the likes of Malevich — produced before Socialist Realism became the only acceptable style.

Inspiration for Article Intro Effects We may define a food to be any substance which will repair the functional waste of the body, increase its growth, or maintain the heat, muscular, and nervous energy. In its most comprehensive sense, the oxygen of the air is a food; as although it is admitted by the lungs, it passes into the blood, and there re-acts upon the other food which has passed through the stomach. It is usual, however, to restrict the term food to such nutriment as enters the body by the intestinal canal. Water is often spoken of as being distinct from food, but for this there is no sufficient reason. Many popular writers have divided foods into flesh-formers, heat-givers, and bone-formers. Although attractive from its simplicity, this classification will not bear criticism.

Headhesive demo - Mark Goodyear Headhesive.js creates an on-demand sticky header. Specify where you want your header to become fixed and the rest is magic. Scroll to see it in action Fullscreen Pageflip Layout with BookBlock Table of Contents ← Previous Demo: Responsive Audio Player Back to the Codrops Article Self-destruction The Hon. Francis Gillette, in a speech in Hartford, Conn., in 1871, said that there was "in Connecticut, on an average, one liquor shop to every forty voters, and three to every Christian church. In this city, as stated in the _Hartford Times_, recently, we have five hundred liquor shops, and one million eight hundred and twenty-five thousand dollars were, last year, paid for intoxicating drinks.

Typography Inspiration: Creating Energetic Type The following excerpt is from Chapter 1 of the Type Idea Index: The Designer’s Ultimate Tool for Choosing & Using Fonts Creatively by Jim Krause. Use the typography inspiration and samples in this excerpt to fuel your search for creative ways of conveying themes of energy, motion, vitality, vigor, force and action through type and its supporting compositional elements. You can apply what you learn from these examples of typography inspiration to your entry into the Print Typography & Lettering Awards, Print’s newest competition. Learn more and enter here. If you want to read more about this topic after you’ve perused the ideas below, you can download the entire chapter for free here. From Jim Krause’s Type Idea Index

Hide your header on scroll - Headroom.js Downloads What's it all about? Headroom.js is a lightweight, high-performance JS widget (with no dependencies!) that allows you to react to the user's scroll.