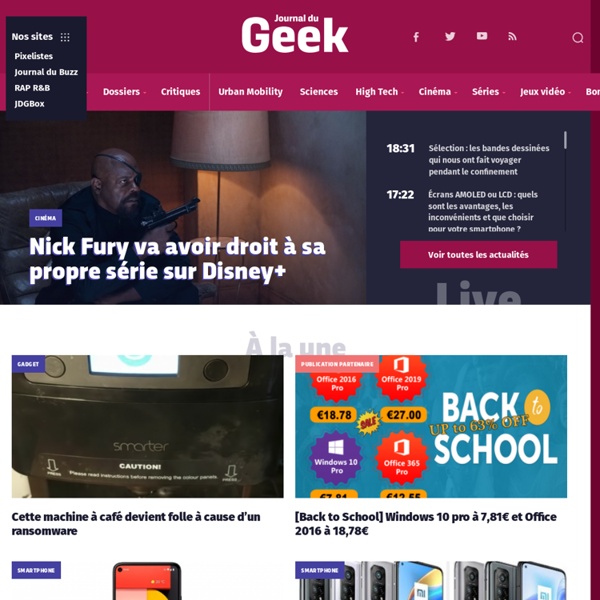 NotMyIP - Comment faire pour masquer en ligne Votre IP série Need of Hiding Your IP Serial No. Internet uses IP for the identification of individual computer and devices. This IP address is like an identification of your online presence and can reveal lots of thing about you to others. Besides that, most websites you visitor tracking with the help of their IP Address. Geek Genius photo: Harshit Sekhon Tired of spending big bucks every time Apple (AAPL) releases a new version of your go-to gadget? (Hint: this happens every year). Then stop. It’s easy to save on everything, from cell phones to laptops, if you know where to look.

Microsoft CEO Satya Nadella makes a big impression in just a year Satya Nadella’s appointment as Microsoft CEO a year ago was surprising. A protracted search for Steve Ballmer’s successor had many expecting the nod to go to an outsider to steer Microsoft into the future, not the then-unknown 22-year Microsoft veteran. Microsoft even attempted to massage any concerns by strategically announcing Bill Gates was "substantially increasing" his time at the company. It’s still not clear whether Gates is really dedicating up to 30 percent of his time at Microsoft. Nevertheless, Nadella created a mission statement to drive Microsoft forward with a mobile and cloud focus, and so far he seems to be steering the software giant in the right direction.

The HttpFoundation Component (The Symfony Components) In PHP, the request is represented by some global variables ($_GET, $_POST, $_FILES, $_COOKIE, $_SESSION, ...) and the response is generated by some functions (echo, header(), setcookie(), ...). The Symfony HttpFoundation component replaces these default PHP global variables and functions by an object-oriented layer. Request The most common way to create a request is to base it on the current PHP global variables with createFromGlobals(): use Symfony\Component\HttpFoundation\Request; $request = Request::createFromGlobals(); which is almost equivalent to the more verbose, but also more flexible, __construct() call:

Mimi Ito - Weblog Cross posted from the Connected Learning Research Network Leveling Up project blog It’s the start of a new year and time to take stock. It’s been three years since the launch of the Connected Learning Research Network and the Leveling Up project, and a year and a half since the launch of this blog. Along the way, we’ve delved into stories of knitters, boy band and wrestling fans, fashionistas, eSports enthusiasts, and game makers, as well as how the online world is supporting their learning, sharing, and civic engagement. The cases we’ve developed over these years have both confirmed many of the core values and principles of the connected learning model, as well as challenged them in some unexpected ways.

How To Bypass Firefox 4.0 Beta’s Incompatible Add-on Error and Install Extensions Anyway The latest Firefox Beta is rather awesome, with tabs on top, and a new menu that looks like an awful lot like Opera. It’s all very slick, until you try and install your favorite extensions that haven’t updated yet. Here’s how to force them to work. Here’s the error message we’re talking about:

Running IE on your Mac, for free via modern.ie Several years ago I figured out how to convert the Virtual PC images windows used to provide for Windows testing to VirtualBox format, that would run on the Mac. It was a long process but was the only way to legally(ish) test Windows for free on your Mac. This year Microsoft lauched modern.ie, where they providing Windows on free disk images compatible on Mac and Linux! Another improvement over the last couple years is how you can access servers running on the host system (i.e. your Mac) from the virtual version of Windows running in VirtualBox. Now it’s as simple as modifying your Windows hosts file.

13 TechCrunch Stories You Don’t Want To Miss This Week Some of our staff spent the week in Austin TX reporting on anti-robot protests and drones that shoot both fire and silly string. But the news cycle rolls on with big announcements from Facebook, Tesla and Nintendo. These are our best stories from this week (3/14-3/20). 1. Animated Letters ashin bogyoke nang maung tekkatho sawbwa binnya In the following effects we also use mo.js for additional animations: thakin zeya sanda duwa sao If you enjoyed this demo you might also like:

Mizuko Ito Mizuko Itō or Mizuko Ito a.k.a. Mimi Ito (伊藤瑞子, Itō Mizuko?, born 22 July 1968, Kyōto, Japan) is a Japanese cultural anthropologist who is an Professor in Residence at the Humanities Research Institute at the University of California, Irvine. Her main professional interest is young people's use of media technology. She has explored the ways in which digital media are changing relationships, identities, and communities. Early life[edit]

How to protect your PC in the web's worst neighborhoods Your data. Your wallet. Your identity. In the darker corners of the internet, it’s all fair game, and disaster could be one unwitting click away. SEO Tactics You Must Stop Right Away If your website is anything like mine, traffic from organic search is where you get most of your traffic. So when traffic starts falling, you start to worry that Google has it in for you. Or the search engine optimization strategy you’ve been using no longer works. It’s hard out there for content. The top 3 search results on Google get 61% of clicks. And 75% of Google users don’t ever look at second page of search results.