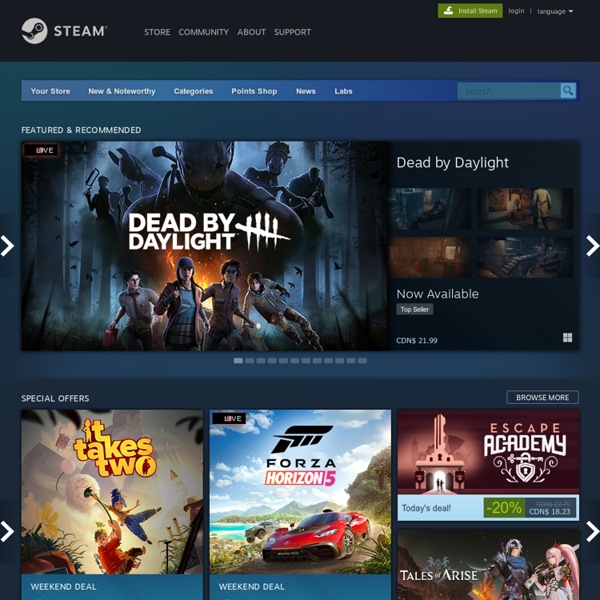 Sid Meier's Power Rankings: Every Sid Meier's Game Ranked Last week 2K released Sid Meier’s Civilization: Beyond Earth, a spiritual successor to Alpha Centauri that takes the already legendary Civilization 5 template and sticks it in space. If you’ve been following Meier over his decades of great work, you already know Beyond Earth will be prudent, colorful and painstakingly tuned. It will welcome you with open arms, and give you enough content to keep your teeth sinking for the rest of your life.

The Minecraft Teacher MinecraftEdu & Minecraft: Education Edition minecraftedu: As you might have already heard, Microsoft will be acquiring MinecraftEdu. Lineage II - Goddess of Destruction With the fall of the Giants, chaos erupted. A new contest for dominance had begun, and the Ertheia were not immune. The Ertheia Surr, an older faction that prided themselves on their magical heritage, voiced their support for the Elves. The Ertheia Nann, the more physical and worldly faction of the two, insisted on neutrality. As the discord deepened, King Zepharon escaped its source altogether by leading his people away into the Wind Spirit Realm. The newfound peace was brief. Sid Meier's Pirates! It's the best pirate game I've ever played. It's also one of the very few pirate games I've ever played, so I dunno if my review will count for much. Surprisingly addicting open-world pirate game where you can go out and do random stuff, like rescue your family from this villain, go treasure hunting, attack other ships and/or settlements, acquire goods from one port and selling it at another port (trading), and even wooing (and eventually marrying) a random daughter of a govenor. There's fun mini games (although lots of people hate the dancing one) and you basically play until you grow too old to continue pirating. Keep watch of the morale of your crew at sea or they may end up deserting you! Only bad thing I found with the game is that the main character whom you play as doesn't look manly enough for my liking, and while I like the dancing mini-games, it tends to go on for too long.

fStretch Interactive Deformer for Maya Over on YouTube is a video showing a new Maya deformer called “fStretch” that offers real-time interactive manipulation and recomputation of surfaces. fStretch is a new maya deformer that let one create astonishing stretch and squash setup very easily. All the resulted deformations are then sculptable and fast. The plugin can also be used for creating believable wrinkles. The algorythm (sic) is fast and can be used on heavy meshes without major slowdown. The plugin will run realtime on a reasonable mesh.

Learning Games List MidAmerica Nazarene Universit The Center for Games & Learning currently holds approximately 300+ game* titles in it's collection. These are listed below. Please sort using these predefined filters. You may apply a filter from each category to narrow your results. To clear your filters, click the "All Skills" or "All Game Types" buttons. 7 Ate 9 [WIP]Vending Machine Casemod Yo everyone, it has been a long time since I really posted something artistic on these forums... But I'm back, and proudly present to you that I've started working on a Borderlands Vending Machine Casemod! The dimensions of the finished case will be 76cm x 40cm x 23cm, which is slightly bigger than my Chieftec case i have now Behold the pictures so far: This is the front image that will be on the case, redesigned in photoshop (except the syringe fella, credits go to Lord_Sharpie) updated the image too, vectorized every bit of the image...

Frozen Synapse A really original simultaneous turn-based tactics, set in a cyberworld of a distant future.Even if usually I'm not too much into this kind of games, I really enjoyed it for its simple yet complex mechanics. The rules are really basic, but since the whole game is about predicting opponent's moves, and you can never, never know for sure what another human being is thinking, and that's why it shines in multiplayer more than anything else, even though it has a lenghty and worthy campaign.Multiplayer is really versatile too, since you can just leave your turn and play another match (or even another game altogether) while you wait your opponent's; you can even set the game to send you an email when a new turn is awaiting you.Also, is worth nothing that replay of your matches are automatically saved on the servers, and you can watch even other's really easily; and there's an amazing little option that uploads your matches to your YouTube channel.