Converting 3D models for building in minecraft. Introduction binvox and viewvox can be of help when trying to build a voxelized version of a 3D mesh in minecraft. 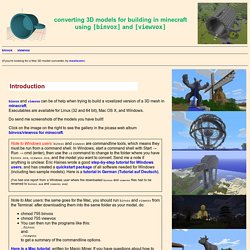 Executables are available for Linux (32 and 64 bit), Mac OS X, and Windows. Do send me screenshots of the models you have built! Click on the image on the right to see the gallery in the picasa web album binvox/viewvox for minecraft. Note to Windows users:binvox and viewvox are commandline tools, which means they must be run from a command shell. (I've had one report from a Windows user where the downloaded binvox and viewvox files had to be renamed to binvox.exe and viewvox.exe) Note to Mac users: the same goes for the Mac, you should run binvox and viewvox from the Terminal: after downloading them into the same folder as your model, do: chmod 755 binvox chmod 755 viewvox You can then run the programs like this: . Here is a Mac tutorial, written by Manic Miner. Process Assume we have a 3D model like the one at the top left, in a file mug.wrl. Step 1: voxelize it Run:. Minecraft Karten-Planer - Blockforum. 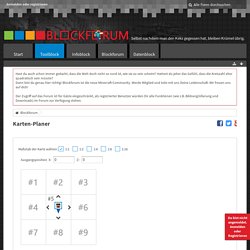 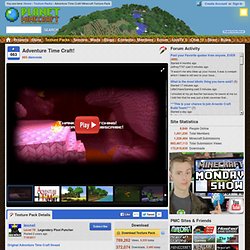 Now if you'll excuse me, I gotta clean out my oatmeal covered microwave.* -------------------ABOUT-------------------Inspired by the American cartoon series, Adventure Time, and with the consultation of Adventure time fans, bokowolf and thanksants, I designed this pack for their enjoyment and the enjoyment of Adventure Time fans everywhere, including me! Minecraft Wiki.en. From its creation, Minecraft was developed almost exclusively by Notch until Jens "Jeb" Bergensten started working with him, and has since become head of its development. 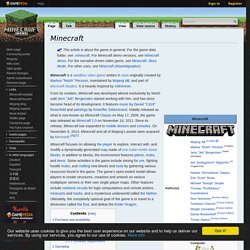 It features music by Daniel "C418" Rosenfeld and paintings by Kristoffer Zetterstrand. Initially released as what is now known as Minecraft Classic on May 17, 2009, the game was released as Minecraft 1.0 on November 18, 2011. Since its release, Minecraft has expanded to mobile devices and consoles. On November 6, 2014, Minecraft and all of Mojang's assets were acquired by Microsoft.[26][27] Minecraft focuses on allowing the player to explore, interact with, and modify a dynamically-generated map made of one-cubic-meter-sized blocks. Purchase and availability The original Minecraft logo before the new logo update for the website on 27–28 April 2011 and Beta 1.4. Crafting. Crafting is the method by which many blocks, tools, and materials are made in Minecraft. 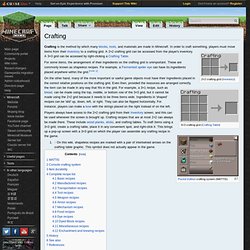 In order to craft something, players must move items from their inventory to a crafting grid. A 2×2 crafting grid can be accessed from the player's inventory. A 3×3 grid can be accessed by right-clicking a Crafting Table. For some items, the arrangement of their ingredients on the crafting grid is unimportant. These are commonly known as shapeless recipes. On the other hand, many of the more important or useful game objects must have their ingredients placed in the correct relative positions on the crafting grid. Players always have access to the 2×2 crafting grid from their Inventory screen, and this can be used whenever the screen is brought up. ↑On this wiki, shapeless recipes are marked with a pair of intertwined arrows on the crafting table graphic.

[edit] MATTIS The player has the option to use a crafting table to give him/her many more choices. Minecraft. Minecraft. Modpack Downloads.