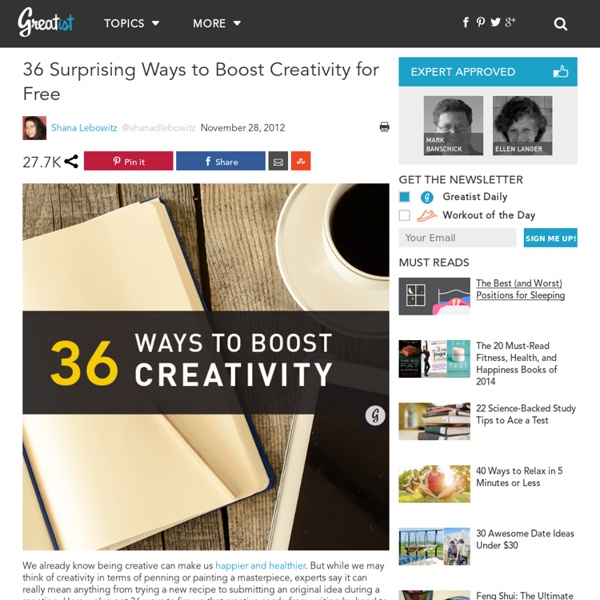 We already know being creative can make us happier and healthier. But while we may think of creativity in terms of penning or painting a masterpiece, experts say it can really mean anything from trying a new recipe to submitting an original idea during a meeting. Here we’ve got 36 ways to fire up that creative spark, from writing by hand to visiting a foreign country. Try (at least) one today! 10 Minutes or Less Listen to music. 30 Minutes or Less Use the hands. Long-Term Don’t expect perfection. Special thanks to Dr.

Never Be Blocked: Keep a Writer's Notebook When I was 11, I was given a little five-year diary with a lock and key. I wrote the usual pre-pubescent stuff in it, a few lines a day, most days. At 14, I began using steno notebooks, and over the next couple of decades I filled dozens with my tormented longings and occasional excited high points. Since I became a professional—and computerized—writer, I've been keeping a writer's notebook.

Best Creative Writing Exercises (PHOTOS) Writers block, oh, writers block ...please go away! Even though it's the bane of all writers' existence, there are a bevy of ways to bypass the darn thing. From writing prompts to writing exercises, there are thousands of ways to get the creative juices flowing. 10 Brilliant Social Psychology Studies Ten of the most influential social psychology experiments. “I have been primarily interested in how and why ordinary people do unusual things, things that seem alien to their natures.Why do good people sometimes act evil?Why do smart people sometimes do dumb or irrational things?”

Game over, Bitcoin. Long live human-based currencies! While being a tremendous proof of concept, the distributed cryptocurrency Bitcoin is fundamentally flawed as an alternative money system, critics say. It is now time for truly radical monetarists to build on this technical experiment and move to the next level of the monetary revolution: a truly human-based digital monetary system. Since its launch in 2009, Bitcoin has turned from a crypto-anarchist project into a hype topic in the worldwide web community and beyond.

Deadly conformity is killing our creativity. Let's mess about more I began to notice the creativity of the manager of the Pret a Manger coffee shop, close to where I live, after he showed extraordinary kindness to a woman with Down's syndrome in her 20s. Well, maybe it wasn't that remarkable, but it was certainly natural and spontaneous and beautifully done. Having been asked by her carer, the woman cleared their tray and tipped the rubbish into the bin. Then she spotted a chocolate energy bar and gave a pleading look to her carer, who shook her head gravely – probably the right decision because she was a little overweight.

5 Ways to Support High-Density Retina Displays An interesting point was raised by Brendan Davis in my recent post “Responsive Web Design and Scrollbars: Is Chrome’s Implementation Better?”: are RWD breakpoints affected by high pixel-density screens? The short answer is: no — but we need to delve a little deeper and look at the problems they can cause. 5 False Beliefs that Are Holding You Back Email by Benny Hsu Over the years you’ve created a set of beliefs in your mind that you hold to be true.

Writing Tips - General On other pages of this site, you can read many of my best writing tips. But this page is for you! Your tip can be about a grammar or spelling rule, the writing process, or how to get published. 10 Creative Block Breakers That Actually Work Doesn't matter what you call it: writer's block or creative block or simply "Where is my inspiration when I need it?!" All creative individuals find their work coming less easily at some times than others. That's when you need strategies, and plenty of them. There are at least 90 such tips, tools, and techniques in , edited by Alex Cornell, with a foreword by Erik Spiekermann.

10 Important Google URLs That Every Google User Should Know Which websites and apps have background access to my Google account? What does Google know about me? Where can I see all the ads that I’ve clicked on Google search? Creating Retina Images for Your Website July 6th, 2012 by Kyle Larson Apple’s newest devices feature the Retina Display, a screen that packs double as many pixels into the same space as older devices. For designers this immediately brings up the question, “What can I do to make my content look outstanding on these new iPads and iPhones?”. First there are a few tough questions to consider, but then this guide will help you get started making your websites and web apps look amazingly sharp with Retina images! Things to Consider When Adding Retina Images