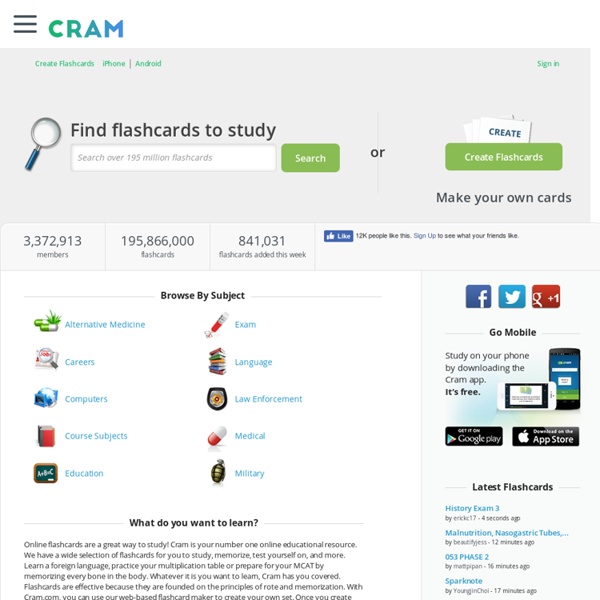 Online flashcards are a great way to study! Cram is your number one online educational resource. We have a wide selection of flashcards for you to study, memorize, test yourself on, and more. Learn a foreign language, practice your multiplication table or prepare for your MCAT by memorizing every bone in the body. Whatever it is you want to learn, Cram has you covered. Flashcards are effective because they are founded on the principles of rote and memorization.

Starting-Off Points for Writing Screenplays Scribendi.com suggests some starting points for writing screenplays. So you want to write a screenplay, but you don't know where to begin? Here are a few ideas for jumping-off points. Providing Every Student in Your Class With a Voice I was the quiet student who always sought out the back row. I never willingly participated in class discussions, not because I didn't have anything to contribute, but because I preferred to communicate my thoughts in writing. Many of our students sit in class quietly as their peers dominate the discussions, wishing they could add to the conversation. Some might lack the confidence to speak in front of their peers while others prefer to formulate their thoughts in writing.

Short Films “Film is a powerful way to tell stories. … The right story, told well, can be engaging, informative, and memorable.” —Sean B. Carroll HHMI’s series of short films for the classroom brings fascinating stories of science and scientists to students and teachers.

Quickly Add Speech Bubbles and Effects to Images Phrase.it is a simple service that anyone can use to add speech bubbles and some basic Instagram-like effects to your pictures. To use the service just upload a picture and choose a speech bubble. Drag your speech bubble into place then type your text. You can change the font style in your speech bubbles. Click the "add more drama" button to add one of four image shading effects. Applications for EducationPhrase.it does not require any kind of registration to use which means that students don't have to have email addresses to use it. US Reported In Panic After Chemtrail Planes Forced Down In India, Nigeria Russian Military Analysts are reporting in the Kremlin today that US Military Forces are “panicked” over the forced landings ordered by Indian and Nigerian Air Forces of two Ukrainian AN-124 aircraft [photo top left] operated by the United States Air Force and based at their gigantic, but secretive, Diego Garcia air base located in the Indian Ocean. According to these reports, China’s People’s Liberation Army Air Force (PLAAF) notified both India and Nigerian intelligence officials about the presence of these US operated Ukrainian aircraft over their growing concerns of the United States spreading of “biological agents” throughout our Earth’s atmosphere, and which some Chinese officials are warning is an American-European attempt to conduct mass genocide via the spread of the H1N1 swine flu virus which has put the entire Global population at risk. And to those, like us, who continue to shout true warnings at them? [Ed. Translation to Spanish by: Sister Maru Barraza, Mazatlán, Mexico

Movie Segments to Assess Grammar Goals: 27 Dresses: Present Perfect Romantic comedies are not my cup of tea, but they are wonderful sources of activities. 27 dresses is no exception. This scene is great for practicing the present perfect tense. I. Talk to a partner: 1. Have you ever had insomnia? 19 Classroom Management Anchor Charts Whether you’re getting ready for back-to-school time or you need enforce a few more rules in your classroom, classroom management anchor charts can be a great solution. We pulled together our favorite charts on classroom rules, procedures, expectations and more, along with a few of our own emoji designs. Don’t forget to watch the emoji video at the end to see how we put them together! Plus if you have a favorite classroom management anchor chart that’s not on our list, put a link in the comments!

The Virtual Lab Series BioInteractive’s virtual labs have won several awards, including top honors in the Pirelli INTERNETional Award competition, which recognizes the best multimedia products designed to use the Internet to educate about science and technology. Designed in close consultation with educators and scientists, these virtual labs are fully interactive biomedical laboratory simulations and provide students with skills and techniques used in scientific research. BioInteractive’s series of virtual labs allows students to examine heart patients, analyze DNA sequences, probe the nervous system of a leech, use human antibodies to diagnose disease, and measure physical traits of stickleback fish and anole lizards to examine key concepts in evolution. Each lab provides an interactive environment in which students perform experiments and collect their data, and answer questions to assess their understanding. The labs can be accessed by clicking the icons on the right-hand side of the page.

8 Steps to Create Engaging Google Forms ( for Teachers ) Today's tutorial is on the use of Google forms. By the end of this guide you will be able to : Create a Google form with different questionsCustomize your Google Forms using a plethora of templatesShare your Google forms Embed your Forms in your Blog or websiteStep 1 Head over to your Google Docs and click on Create then on Form Step 2 Give your form a title and a description MIMIC-TPW Global | Global-2 | North Atlantic | West Pacific | East Pacific | Indian Ocean | Australia/Fiji Current time: Sat, 28 Apr 2018 03:15:24 GMT Note: We now recommend you refer to the upgraded MIMIC-TPW2 product, which has higher reliability and full-globe coverage.