Asrivat1/DeepLearningVideoGames. UFLDL Tutorial - Ufldl. What is Deep Learning? Scyfer is a University of Amsterdam spinoff that specializes in deep learning technology. 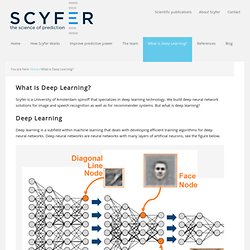 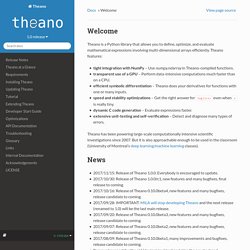 Theano features: tight integration with NumPy – Use numpy.ndarray in Theano-compiled functions.transparent use of a GPU – Perform data-intensive computations much faster than on a CPU.efficient symbolic differentiation – Theano does your derivatives for functions with one or many inputs.speed and stability optimizations – Get the right answer for log(1+x) even when x is really tiny.dynamic C code generation – Evaluate expressions faster.extensive unit-testing and self-verification – Detect and diagnose many types of errors. Theano has been powering large-scale computationally intensive scientific investigations since 2007. But it is also approachable enough to be used in the classroom (University of Montreal’s deep learning/machine learning classes). 2017/11/15: Release of Theano 1.0.0.

Git clone “Thank YOU for correcting it so quickly. Deep Learning. Overview — Pylearn2 dev documentation. This page gives a high-level overview of the Pylearn2 library and describes how the various parts fit together. 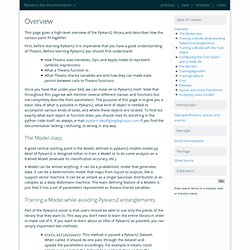 First, before learning Pylearn2 it is imperative that you have a good understanding of Theano. Before learning Pylearn2 you should first understand: How Theano uses Variables, Ops, and Apply nodes to represent symbolic expressions.What a Theano function is.What Theano shared variables are and how they can make state persist between calls to Theano functions. Once you have that under your belt, we can move on to Pylearn2 itself.

Note that throughout this page we will mention several different classes and functions but not completely describe their parameters. The Model class A good central starting point is the Model, defined in pylearn2.models.model.py. A Model can be almost anything. Training a Model while avoiding Pylearn2 entanglements Part of the Pylearn2 vision is that users should be able to use only the pieces of the library that they want to. UFLDL Tutorial - Ufldl. Deep Learning. Deep Learning: Computer Vision with Fast / Deep / Recurrent Neural Nets Etc Yields Best Results on Many Benchmarks, and Wins Many Contests (Juergen Schmidhuber) Reaching Enlightenment I. Cid’s brain is an instance of a Deep Boltzmann Machine (DBM). 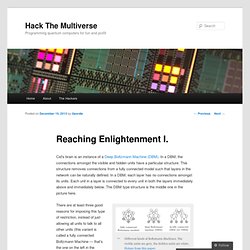 In a DBM, the connections amongst the visible and hidden units have a particular structure. This structure removes connections from a fully connected model such that layers in the network can be naturally defined. In a DBM, each layer has no connections amongst its units. Each unit in a layer is connected to every unit in both the layers immediately above and immediately below. The DBM type structure is the middle one in the picture here. There are at least three good reasons for imposing this type of restriction, instead of just allowing all units to talk to all other units (this variant is called a fully connected Boltzmann Machine — that’s the one on the left in the picture): Computational tractability. Here some of the weights are explicitly shown — all four U weights (connecting the visible unit to the hidden units) and three of the W weights are explicitly shown (the bold lines with the W next to them). becomes. NAACL 2013. Contenu — Notes de cours IFT6266 Hiver 2012.