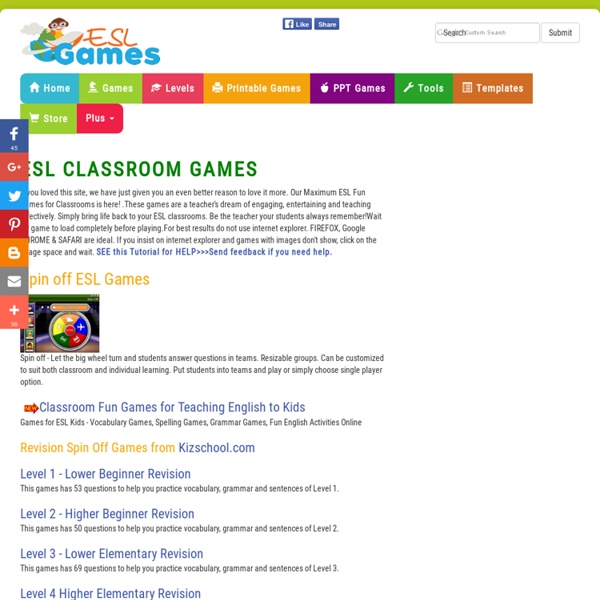 ESL Powerpoint (PPT) Games If you are the type of person who prefers to have games on powerpoint or as printable handouts, we have been thinking of you. We offer board games, powerpoint games and more for the classroom and one to one teaching. They have made my lessons fun and I have no doubt yours will be fun too. Added to the good news are the templates we offer that you can use to create customized games for your classroom and teaching. It is total fun and highly engaging fun lessons with these resources. Printable ESL Board and Card Games We offer a variety of printable ESL board games and card games to help give your students lots of communicative practice. ESL Board & Powerpoint Games Templates ESL Game Templates - Powerpoint and Word Game Templates On ESL Games World we do not only aim at providing you with games for your classrooms. Classroom Tools - Click Here! Get some cool tools for use in your classroom.

Falling Clouds Falling Clouds In this game you have to move words around to make a sentence. You can practice English grammar by rearranging words to make a complete sentence. The sentences get more complicated as you progess. ESL Classroom Jeopardy Verb Tenses, Past Simple, Future, Perfect ESL Interactive Fun Games Here we have the games carefully laid out for you. Follow the links to browse the variety of games offered.

ESL Games and Game Board The ESL game boards found on this page are in the form of Microsoft Word documents. It may take a few second to open. Just click, print, and photocopy. A great motivating TEFL activity. Word Skills: Review synonyms, antonyms, beginning sounds, ending sounds, middle sounds, and rhymes.

10 More PowerPoint Games – tekhnologic In December 2016, I wrote a post called 10 PowerPoint Games. Due to its popularity, here are 10 more PowerPoint Games. The first bumper pack of 10 PowerPoint Games was put together to thank everyone who has been following tekhnologic. It was hugely successful and I knew straight away that I should be looking ahead to the future and thinking about producing 10 more PowerPoint Games. However, I wasn’t inspired just by the popularity of the previous post. I had been thinking about gradually replacing the downloads page with a series of collections instead. Math Games for Kids online,free interactive learning game for the classroom grade 3 4 5 6 7 8 9,addition multiplication subtraction For children, teens & Big Kids – Play fun online math games for free – addition and subtraction games, multiplication and division problem solving games on your computer. Interactive math activities for elementary school, middle school/ junior high school students, as well as kindergarten age kids involving basic math problems, exercises. From simple fun games to more challenging and difficult ones. Happy math solving on Learn4Good.com! Play a very challenging, tile-based, numbers puzzle game on your mobile, tablet, desktop, laptop or notebook! This viral sensation has been played by millions of gamers online and on their mobile devices since it was released in 2014!

The Starr Spangled Planner: Kaboom! Possibly The Best Center Game Ever! Do you use Kaboom! in your classroom? It has been my go-to center for the past few years, whether I'm teaching Firsties, or now third graders. If Kaboom! is new to you, or it is something you haven't yet tried in your classroom, here are some great reasons to give it a try:1.

Huntington Learning Center What is the GED? The General Educational Development Test, or GED, measures adult skill levels in four areas of high school academics. The GED test is used as a basis for issuing high school credentials, meaning it is widely accepted as an equivalent to a high school diploma.

ESL Warm-up Games and Activities Divide the students into 2 teams. Have 2 desks at the front of the class, facing each other, with an eraser in the middle of the 2 desks. One student from each team comes and sits in the hot seat. Rotate through so that all the students get a chance to play. You then ask a question of some sort. The first person that grabs the eraser can try to answer the question. Two Truths and a Lie Ideas, Examples & Instructions The game Two Truths and a Lie is a great party game for teenagers and can also be a good icebreaker in meetings, classes or other situations where you need to make introductions. Below are some examples of truths or lies if you're already familiar with the game and just need to get some ideas. These are easy to modify to make them true (or not true) for yourself. For information on how to play the game, see below the examples. This game is also called Two Truths, One Lie or Two Truths and One Not.

Join a GED Learning Community The GED Academy connects you with other GED® learners and free online GED resources. The information, tips, and support you gain will make your journey easier. And you’ll be helping other learners along the way, even if you only ask a question. GED Student Stories Research Themes Sanghoon Park The effects of seductive augmentation and agent role on learning interest, achievement, and attitude Tami Im The effects of emotional support and cognitive motivational messages on math anxiety, self-efficacy, and math problem solving The purpose of this research was to investigate the effects of including adaptive confidence strategies in instructionally sound computer-assisted instruction (CAI) on learning and learner confidence.