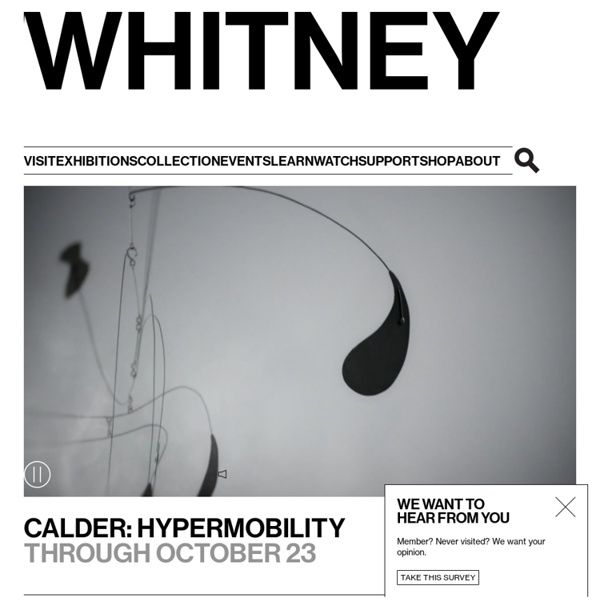 New York Guggenheim Go New York On View Now On View Now Yayoi Kusama Yayoi Kusama Museum Boijmans van Beuningen, Rotterdam, Netherlands Yayoi Kusama, Infinity Mirror Room - Phalli's Field (Floor Show) (1965) For nearly half a century now, Yayoi Kusama’s personal history has preceded her: the artist arrived in New York from Japan in the late 1950s, and soon became the city’s avant-It Girl, receiving praise from and exhibitions with the likes of Donald Judd, Frank Stella and Yves Klein. Though she preferred the somewhat antiquated ‘avant-garde’ label to Abstract Expressionism, Minimalism or Fluxus, hers was nonetheless the perfect art practice for the wild 1960s. It mixed a vivid Pop sensibility with a knack for media pranksterism, best manifested in her elaborately staged performances and happenings, some of which she referred to as ‘nude-ins’.

Japan Society, New York - Gallery March 11–June 12, 2016 The catastrophic earthquake and tsunami that struck northeast Japan on March 11, 2011 and triggered an on-going nuclear crisis has been met with an overwhelming reaction in the arts, marking a profound shift in the contemporary Japanese cultural landscape. Opening five years to the day since 3/11, Japan Society’s presentation of In the Wake reveals a stunning range of photographic responses to the disaster and the artistic paths that lie ahead as Japan continues to rebuild. Experience the power of art to transcend unspeakable tragedy with over 90 photographic works by 17 of Japan’s leading visionaries, including Nobuyoshi Araki, Naoya Hatakeyama, Keizō Kitajima, Lieko Shiga, and Tomoko Yoneda. This exhibition was organized by the Museum of Fine Arts, Boston. More information, including exhibition-related programs, coming soon.

2008 February 18 « Ground Glass The blogosphere is full of ‘best of’ lists and rankings. The blog is a perfect venue for this type of information. So I thought it would be nice to create a women in the history of photography list. I rarely read an interview where a photographer, male or female, cites a woman as an influence. The exceptions is perhaps Diane Arbus. And I have always found the sources on this subject rather limited.

Moscow Museum of Modern Art Moscow Museum of Modern Art is the first state museum in Russia that concentrates its activities exclusively on the art of the 20th and 21st centuries. Since its inauguration, the Museum has expanded its strategies and achieved a high level of public acknowledgement. Today the Museum is an energetic institution that plays an important part on the Moscow art scene. The Museum was unveiled on December 15, 1999, with the generous support of the Moscow City Government, Moscow City Department of Culture. Its founding director was Zurab Tsereteli, President of the Russian Academy of Arts.

Daido Moriyama: Journey to Something Today a solo exhibition of one of Japan’s foremost photographers is opened at the Reflex Art gallery in Amsterdam. For Journey to Something, Daido Moriyama has pulled shots from his archive as well as new images. We were very honoured to do a short interview with the man himself. BLEND\: You started out as a graphic designer. What made you want to become a photographer?Moriyama: When I was very young, I was a graphic designer. top 5 art events and exhibitions around the world you can't miss in october 2012 Madrid: María Blanchard October 17 – February 25, 2013 The exhibition dedicated to María Blanchard (Santander, 1881 – Paris, 1932) seeks to recover this Spanish artist who experienced painting with all of its uncertainties and convictions and who would end up becoming one of the great figures of the avant-garde.

August Sander. (German, 1876–1964) German photographer. After seven years as a miner and a period of national service, he studied painting in Dresden from 1901 to 1902, which allowed him to approach photography artistically. He had developed an interest in photography through work in photographic firms in Berlin, Magdeburg, Halle and Dresden from 1898 to 1899. Experimental/Avant-Garde Like many of the predominant art movements in the Twentieth Century, American Experimental Film, one could argue, saw its birth in New York City. Conversely, one could easily claim that the movement began on the opposite coast (in San Francisco, for instance, where truly significant developments were made, or in the shadow of Hollywood, where several filmmakers got their start. Regardless, though heavily influenced by the German Expressionists (F.W. Murnau, Fritz Lang, Robert Wiene), the Soviet Constructivists (Alexander Dovzhenko, Sergei Eisenstein, Vsevolod Pudovkin) and the early French Trick-Filmmakers (Georges Melies, Emile Cohl, Ferdinand Zecca), experimental work in the 1950s and 1960s grew out of a desire to expand beyond the rules of conventional narrative and invent a new language for film.

International Center of Photography Library The urban environment, with its fast pace, constant motion and blur of activity has consistently been a subject for the well-known Japanese postwar photographer Daido Moriyama. Whether contemporary images of his Shinjuku, Tokyo neighborhood or vintage 1971 photos taken during his first trip to New York with close friend and graphic designer Tadanoori Yokoo, Moriyama’s ability to capture the nervous and dark edges of a city and tame it within a raw exuberance and vitality is emblematic of his highly charged visual language. Nearly 40 years since his first trip to New York, Moriyama returned to the city this past week to participate in several events at Japan Society and the Aperture Gallery. Particularly of interest were Moriyama’s comments about American photographer William Klein, who he freely praised as one of his earliest and most profound influences. I began photography at the age of 22 – 23, and that is when I encountered William Klein’s New York.

Daido Moriyama 森山大道 « I c. U c. Wii c. Oishii! Above is a photo of Daido Moriyama adding comments to his works at his show. (Photo taken from white-screen.jp) He is a photographer; furthermore, he is a Visual Anthropologist. Moriyama, born in 1938, began his career as early as when he was 20. He first started off as a graphic designer but two years later he began his study of photography under photographer Takeji Iwamiya. [1]