Frozen Butterbeer for the Deathly Hallows Premiere – Cook Like a Champion 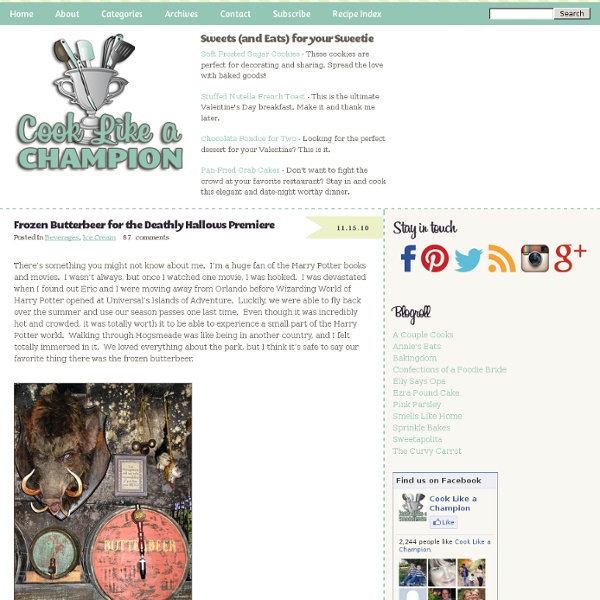 There’s something you might not know about me. I’m a huge fan of the Harry Potter books and movies. I wasn’t always, but once I watched one movie, I was hooked. I was devastated when I found out Eric and I were moving away from Orlando before Wizarding World of Harry Potter opened at Universal’s Islands of Adventure. Luckily, we were able to fly back over the summer and use our season passes one last time. Even though it was incredibly hot and crowded, it was totally worth it to be able to experience a small part of the Harry Potter world. Butterbeer, for those who don’t know, is a favorite drink of young witches and wizards. Looking for more Harry Potter recipes to celebrate the premiere of Deathly Hallows this week? Frozen Butterbeer for the Deathly Hallows Premiere Ingredients For the butterbeer: 1½ cups cream soda 6 tablespoons butterscotch schnapps 2 cups ice For the foamy topping: 6 tablespoons heavy cream 1 tablespoon butterscotch schnapps Directions Source Cook Like a Champion original

Roy G. Biv Smoothies I’ve had a few requests over the last few weeks for some smoothie recipes because I let it slip that Betsy and I generally just have a big smoothie for breakfast everyday. Turns out our daily smoothie recipe is a mix between yellow, red, and indigo, but that’ll make more sense to you later. Smoothies can be so varied I really struggled for awhile on how to present a wide spectrum of recipes in one post. That was, of course, until I saw a guy riding a bike last weekend with a rainbow sticker on his backpack. When I saw the rainbow I thought, now those would be some awesome smoothies!

The Brownie That Will Change Your Life Let me start off by saying that viewer discretion is advised for today’s post. OK now with the story that preludes possibly the greatest brownie I have ever sunk my teeth in thus far in my life. Last Saturday Mrs. Harry Potter Recipes: rock cakes Mrs. Weasley's Rock Cakes Ingredients:8oz or 2 cups self-raising flour1/2 tsp salt4oz or 1 stick of butter3oz sugar (1/3 cup plus a tbsp)1 tsp vanilla extract1 1/2 oz currants or sultanas (scant 1/3 cup golden raisins)1 tbsp candied peel1 egg2 tbsp milkcaster sugar for dredging (superfine sugar) Nanaimo Bars Other than my short stint as a resident of New York City, I've never lived in a city with a "signature" food. I'm talking about claim-to-fame level: cheese steaks from Philadelphia, coffee from Seattle, Hatch chiles from New Mexico. These Nanaimo Bars are the ultimate signature food, from beautiful Nanaimo, British Columbia on Vancouver Island in Canada. Nanaimo bars are a rich, decadent, 3-layer, no-bake treat. The bottom crust layer is chocolate, graham cracker crumbs, almonds, and coconut. I'm not sure if this is heresy (Canadian friends?

30 Drinks Every Bartender Should Know So I have a new hire who is about to bartend her first bartending shift and I was about to e-mail her 30 drinks every bartender should know and looking for a list (so I wouldn’t have to make it) and almost every list I found was absolutely ridiculous. For example, one site listed the Bocci Ball (don’t know what it is, probably never will as in 12 years no one has ever ONCE asked me for one). Or the Freddy Fudpacker (aka The Cactus Banger) – once again NEVER HEARD anyone order either of these ever ONCE. I’m not naming any drinks on this list where the ingredients are the name i.e. vodka tonic, amaretto sour, or gin and juice. 1.