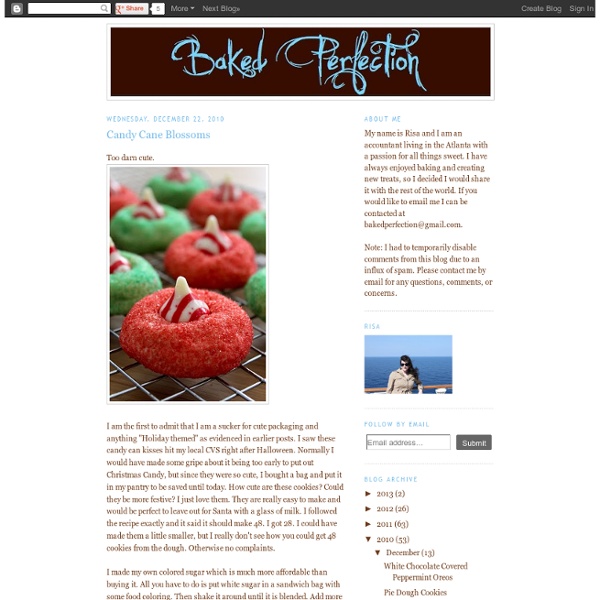 Too darn cute. I am the first to admit that I am a sucker for cute packaging and anything "Holiday themed" as evidenced in earlier posts. I saw these candy can kisses hit my local CVS right after Halloween. Normally I would have made some gripe about it being too early to put out Christmas Candy, but since they were so cute, I bought a bag and put it in my pantry to be saved until today. How cute are these cookies? Could they be more festive? I made my own colored sugar which is much more affordable than buying it. UPDATE: I posted this recipe again with a few additional tips and sprinkle ideas. Candy Cane Blossoms 1 bag Hershey;s Kisses brand Candy Cane Kisses 1/2 cup butter, softened 1 cup granulated sugar 1 1/2 teaspoons vanilla extract 1 egg 2 cups all purpose flour 1/4 teaspoon salt 1/4 teaspoon baking soda 2 tablespoons milk Red and Green colored sugar Preheat over to 350 degrees Fahrenheit. Beat butter, sugar, vanilla, and egg in large bowl until well blended.

Slow Cooker Chicken-Barley Stew Crock Pot Hungarian Beef Goulash Recipe This crock pot beef goulash recipe skips browning the beef and instead coats it in a spice crust. This combine-and-cook slow-cooker beef goulash recipe is quick to mix together and a healthy slow-cooker recipe for dinner. eatingwell.com Slow Cooker Chicken: Hot and Spicy Braised Peanut Chicken Baked Banana Monkey Bread Sunday’s are rough around this house. It has become our day of boredom, cleaning and more boredom. My husband has to get his things together for the new work week, our son gets grumpy about school the next day and for me and the girls, it’s nothing different really. So we all get a little bored and stir crazy especially during the winter months. So I just decided to take some me time in the kitchen to fight the boredom, armed with biscuits, sugar, cinnamon and bananas.

Santa Hat Party Mix - Cookies and Cups This past weekend my husband and I got together with some friends and had a game night. Game nights are fun, aren’t they? Aren’t they? Well, they are supposed to be fun. Until… Men vs. Marshmallow 101 A few months ago, I promised a marshmallow tutorial –WITH PHOTOS! – to Laura and Karen, to prove that, YES!, they can make marshmallows at home. Big, soft, happy, puffy marshmallows that taste much better than any you’ll find at the grocery. Nutella-Mallow Pillow Pockets When I tell you this, take me very seriously…..run, don’t walk to your nearest grocery store and make these today! I knew I wanted to make a Nutella treat the other day and when this simple idea came to mind I had no idea how crazy good it would be! The pastry with the gooey disappearing marshmallow and nutella make for a treat that you just must try for yourself!

Nanaimo Bars Other than my short stint as a resident of New York City, I've never lived in a city with a "signature" food. I'm talking about claim-to-fame level: cheese steaks from Philadelphia, coffee from Seattle, Hatch chiles from New Mexico. These Nanaimo Bars are the ultimate signature food, from beautiful Nanaimo, British Columbia on Vancouver Island in Canada. Nanaimo bars are a rich, decadent, 3-layer, no-bake treat. The bottom crust layer is chocolate, graham cracker crumbs, almonds, and coconut. I'm not sure if this is heresy (Canadian friends?

no-bake rocky road bars Who really uses evaporated milk anymore? For reals. The stuff is a little scary and has “great grandma” written all over it. Sweetened condensed milk? Now, that’s a different story. I could drink that stuff with a straw and bow down to it for it’s majestic role in this grand beauty. Glorious Treats » Chocolate Peppermint Cupcakes This week my husband asked if I could make some Chocolate Peppermint Cupcakes for him to bring into work. My husband’s co-workers are often the recipients of my baking trials and triumphs, and always seem more than happy to eat my “experiments”. My husband doesn’t often put in special requests, so I was glad to cater to him and sent him to work today with a dozen Chocolate Peppermint Cupcakes. My husband’s work shift starts at 6am and he called me later in the morning to let me know the cupcake were gone by about 6:10am! I guess that means they liked them =) The recipe is just a tiny variation of the Chocolate Cupcake and Cream Cheese Frosting recipes I’ve posted before, but I’ll add them here to save you a couple clicks.

Chai Butter Cookies Slowly but surely, I’m replacing summer’s nightly bowl of ice cream with a big cup of chai. The ice cream wasn’t so bad at first – all-natural with half the fat! – but then I started tinkering. Oreo and Peanut Butter Brownie Cakes - StumbleUpon So, after being gone all last week, this has been catch up on the house week. Mostly laundry actually. Man, who knew that a weeks worth of laundry from 5 people could be so daunting. Yikes!! But I am kind of behind on my cooking and baking as well since I've been gone and cleaning.