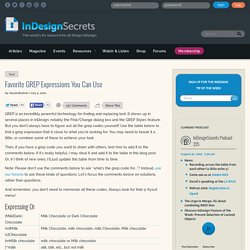 It shows up in several places in InDesign, notably the Find/Change dialog box and the GREP Styles feature. But you don't always have to figure out all the grep codes yourself! Use the table below to find a grep expression that is close to what you're looking for. Then, if you have a grep code you want to share with others, feel free to add it to the comments below. Note: Please don't use the comments below to ask "what's the grep code for...

"? And remember: you don't need to memorize all these codes. Expressing Or Wildcards Escape! Fun Tricks To learn more about GREP, visit: www.indesignsecrets.com/grep David Blatner is the co-founder of the Creative Publishing Network, InDesign Magazine, and the author or co-author of 15 books, including Real World InDesign. 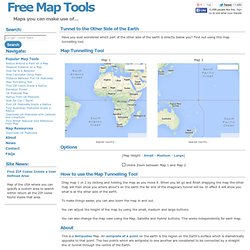 Find out using this map tunnelling tool. Map Tunnelling Tool Options Unlink Zoom between Map 1 and Map 2 How to use the Map Tunnelling Tool Drag map 1 or 2 by clicking and holding the map as you move it. To make things easier, you can also zoom the map in and out. You can adjust the height of the map by using the small, medium and large buttons. You can also change the map view using the Map, Satellite and Hybrid buttons. About This is a Antipodes Map.

A favicon is a small, 16x16 image that is shown inside the browser's location bar and bookmark menu when your site is called up. It is a good way to brand your site and increase it's prominence in your visitor's bookmark menu. More information on favicon After you've created a neat favicon, it's time to add it to your site. To do so, follow the below simple procedure: Upload the generated file ("favicon.ico") to your site. Also see- Favicon Editor Also check out our Favicon Editor to create the 16x16 icon image from scratch! QR Code and 2D Code Generator. This page is an online two dimensional code generator which is written in PHP. 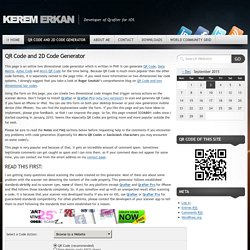 It can generate QR Code, Data Matrix, Aztec Code and Micro QR Code for the time being. Because QR Code is much more popular than the other code formats, it is separately named in the page title. If you need more information on two dimensional bar code systems, I strongly suggest that you take a look at Roger Smolski‘s comprehensive blog on QR Code and two dimensional bar codes. Using the form on this page, you can create two dimensional code images that trigger various actions on the scanner device. Don’t forget to install Qrafter or Qrafter Pro (why two versions?) Please be sure to read the Notes and FAQ sections below before requesting help in the comments if you encounter any problems with code generation (Especially for Micro QR Codes or backslash characters you may encounter on some codes!).

This page is very popular and because of that, it gets an incredible amount of comment spam. Notes: Alpha: Computational Knowledge Engine. Wordle.

I use it (sometimes) in presentations for my students; mostly a succes. – bergm