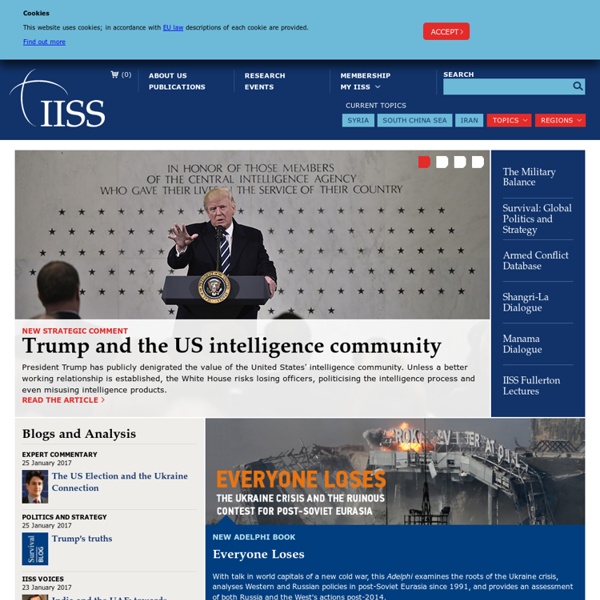 Conflict Prevention Centre - Secretariat - Conflict Prevention Centre The OSCE’s comprehensive approach to security is closely tied to the concept of early warning, conflict prevention, crisis management, and post-conflict rehabilitation, also named the “conflict cycle.” The Organization’s main methods to address this cycle include its network of field operations and the Conflict Prevention Centre. Created in 1990 to help reduce the risk of conflict, the Centre now provides policy advice, support, and analysis to the Secretary General, Chairmanship, participating States, and field operations. It acts as an OSCE-wide early warning focal point, facilitates negotiation, mediation, and other conflict prevention and resolution efforts, and supports regional co-operation initiatives.

Chatham House, the Royal Institute of International Affairs What is RSS? RSS (Really Simple Syndication) feeds are files which can be loaded into RSS viewers, and automatically display new content from the Chatham House website. This allows you to keep up to date with news from Chatham House without having to view every section of the website. An RSS service (or channel) consists of a list of items, each of which contains a headline, a description, and a link back to a web page on the Chatham House site. You can choose to sign up to the main chathamhouse.org feed (Chatham House - What's New below), which will stream the headlines of all new Chatham House content to you, or you may prefer to receive a feed only on, for example, new Africa-related material.

10 Motivational TED Talks to Watch With Breakfast One of my favorite innovations in recent years is the idea of TED Talks. Whether you attend a session in person or watch online, you can learn and gain inspiration and see and hear people tell their stories and share their expertise firsthand. It's accessible, substantive information on virtually every topic imaginable. If reading the news first thing in the morning is bringing you down, why not save that task for a bit later in the day? Bosnia and Herzegovina general election, 2010 Presidential and parliamentary elections were held in Bosnia and Herzegovina on 3 October 2010 for both the Federal government and the two entities.[1] Voters elected 42 deputies to the State House of Representatives.[2] In the Federation of Bosnia and Herzegovina (FBiH), 98 deputies to its House of Representatives, two representatives (one Bosniak, one Croat) to the tripartite state presidency and ten cantonal assemblies were elected.[2] In Republika Srpska (RS), 83 deputies to its National Assembly, the Serb representative of the tripartite state presidency, one RS president and two RS vice-presidents were elected.[2] There were 39 political parties, 11 coalitions, and 13 independent candidates.[3] Background[edit]

Press Release: OSCE Head of Mission welcomes the arrest of Radovan Stankovic Press Release | 23.01.2012 Court of BiH SARAJEVO, 23 January 2012 – The Head of the OSCE Mission to Bosnia and Herzegovina, Ambassador Fletcher M. Burton, welcomed today the arrest of Radovan Stankovic, a convicted war criminal and fugitive at large. 2010–2012 Bosnia and Herzegovina government formation Following the election on 3 October 2010, a process of formation of Bosnia and Herzegovina's Council of Ministers had begun. The resulting election has produced a fragmented political landscape without a coalition of a parliamentary majority more than a year after the election. The centralist Social Democratic Party of Bosnia and Herzegovina, the largest party in the Federation of Bosnia and Herzegovina and the Bosnian Serb autonomist Alliance of Independent Social Democrats, the largest party in the Republika Srpska, each have 8 MPs of the total 42 MPs of the House of Representatives (28 from FB&H and 14 from RS). Similarly, a crisis of government is also present at the local levels, as well as the Federal entity.

Press Release: OSCE report highlights inadequate and unequal social assistance for vulnerable groups in BiH Press Release | 29.06.2012 The right to social protection is a basic human right specified in core human rights instruments (V.Pribilovic) SARAJEVO, 29 June 2012 – Bosnia and Herzegovina’s most vulnerable individuals are not receiving adequate and proportional social protection benefits, according to an OSCE Mission to Bosnia and Herzegovina report launched today. The report, The Right to Social Protection in BiH, gives a technical overview of the social protection system in BiH, highlighting areas of concern regarding inadequacies and inequalities, particularly from a human rights perspective, and taking into account the international human rights obligations BiH has pledged to respect.