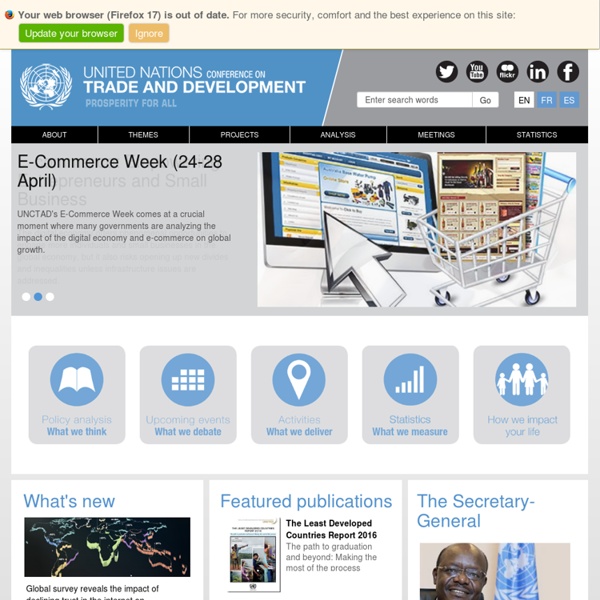 GATT documents Browse by symbol back to top GATT documents are identified by a “symbol” or code which is based on either the issuing body or subject matter of the document. Unlike WTO document symbols, GATT symbols are not hierarchical. Documents for which no link appears are not available electronically Browse by date back to top

Envisioning Real Utopias: alternatives within and beyond capitalism - 05 - 2012 Ralph Miliband Programme: the future of the left Date: Tuesday 22 May 2012 Time: 6.30-8pm Venue: Old Theatre, Old Building Speaker: Professor Erik Olin Wright Chair: Dr Robin Archer Wright argues that we can be simultaneously utopian and practical by pursuing projects for social transformation within capitalism that point us in an emancipatory direction beyond capitalism. Erik Olin Wright is Vilas Distinguished Professor of Sociology at the University of Wisconsin-Madison, and president of the American Sociological Association. Suggested hashtag for this event for Twitter users: #lseutopias This event is free and open to all with no ticket required. Primary Commodity Prices: Frequenly Asked Questions (FAQs) Frequently Asked Questions Last Updated: November 27, 2013 Q: Where can I find and download commodity prices and indices?

Erik Olin Wright Following quick on the heels of publication of Russell Jacoby's review of Erik Olin Wright's Envisioning Real Utopias in Dissent, Michael Burawoy has written a detailed reply stressing the importance of Wright's project and rescuing it from the tangle of Jacoby's at times ad hominem attack, an excerpt of which reads: Wright seems to know nothing about the history of utopian thought, communities, or cooperatives. He refers to exactly one book in the utopian tradition, Martin Buber's 1949 Paths in Utopia. Buber's book closed with a discussion of the kibbutz, a subject that would seem to call out to Wright. After all, the kibbutz is a "real utopia" with a socialist ethos and decades of practice. Are there lessons to be found here?

IMF Direction of Trade Statistics dataset guide The Direction of Trade Statistics (DOTS) database contains data on the value of merchandise exports and imports between each country and all its trading partners. Total bilateral and multilateral exports and imports are aggregated at national or regional group level. For each reporting country or group, all the trading partners are listed. A Capitalism for the People - 06 - 2012 LSE public lecture Date: Thursday 21 June 2012 Time: 6.30-8pm Venue: Old Theatre, Old Building Speaker: Professor Luigi Zingales Chair: Professor David Webb When the Italian-born economist Luigi Zingales first arrived in the United States in the 1980s, he embraced the American dream: the belief that what brings you success is hard work, not luck or who you know.

IMF Balance of Payments Statistics (BOPS) dataset guide Balance of Payments Statistics (BOPS) record the flow of goods, services and finance between an economy and the rest of the world. As one of the primary functions of the International Monetary Fund (IMF) is to prevent financial crises and assist countries in balance of payments difficulties, the collection of standardised, comparable balance of payments data is seen as a core task. The IMF BOPS database contains over 200 countries and regional groups.

The emerging left has much to offer a world compromised by capitalism Even as resistance to global capitalism builds, it tends to be accompanied by gloomy perceptions that grand socialist visions of the future are no longer possible. But there is much more dynamism within the global left than is often perceived, with variegated moves away from tired ideas of all kinds. Left movements in different parts of the world increasingly transcend the traditional socialist paradigm, with its emphasis on centralised government control over an undifferentiated mass of workers, to incorporate more explicit emphasis on the rights and concerns of women, ethnic minorities, tribal communities and other marginalised groups, as well as recognition of ecological constraints and the social necessity of respecting nature.

Pluto Press - Decent Capitalism Product Description The recent crisis, created by finance capitalism, has brought us to the economic abyss. The excessive freedom of international markets has rapidly transformed into international panic, with states struggling to rescue and bail out a globalised financial sector. Reform is promised by our leaders, but in governments dominated by financial interests there is little hope of meaningful change. Decent Capitalism argues for a response that addresses capitalism’s systemic tendency towards crisis, a tendency which is completely absent from the mainstream debate.

Sign In This item requires a subscription to Transfer: European Review of Labour and Research. To view this item, select one of the options below: Already an individual subscriber? If so, please sign in to Transfer: European Review of Labour and Research with your User Name and Password. Pay per Article - You may purchase this article for US$32.00. You must download your purchase, which is yours to keep, within 24 hours. Capitalism and the Future - Nassim Taleb / Niall Ferguson What will the American economic system look like in the months and years ahead? Who are the innovators currently shaping the future? And what will be the role of business in that future? President of the Aspen Institute, Walter Isaacson invites Niall Ferguson, MA, D.Phil., Laurence A. Tisch Professor of History at Harvard University and William Ziegler Professor at Harvard Business School, Indra Nooyi, Chair and CEO of Pepsico, Eric Schmidt, Chairman of the Board and Chief Executive Officer, Google, and Nassim Taleb, scholar of randomness and risk, literary essayist, and derivatives trader, to consider the issues in the media and on the public mind. About Niall Ferguson Niall Ferguson is Laurence A.

UNCTAD promotes the integration of developing countries into the world economy. Its work aims to help shape policy debates and thinking on development, with a particular focus on ensuring that domestic policies and international action are mutually supportive in bringing about sustainable development. by jerry_jenkins Dec 12