SAIC: From Science to Solutions® 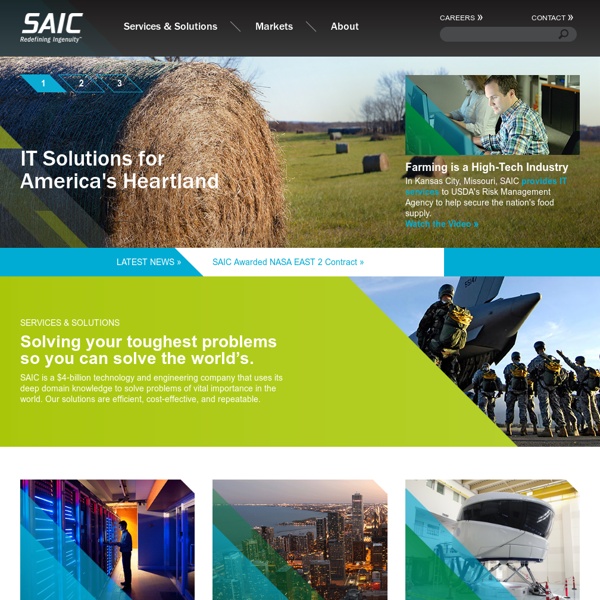 Naomi Wolf: Fascist America, in 10 easy steps | World news Last autumn, there was a military coup in Thailand. The leaders of the coup took a number of steps, rather systematically, as if they had a shopping list. In a sense, they did. They were not figuring these things out as they went along. As difficult as this is to contemplate, it is clear, if you are willing to look, that each of these 10 steps has already been initiated today in the United States by the Bush administration. Because Americans like me were born in freedom, we have a hard time even considering that it is possible for us to become as unfree - domestically - as many other nations. It is my argument that, beneath our very noses, George Bush and his administration are using time-tested tactics to close down an open society. Conason eloquently warned of the danger of American authoritarianism. 1. After we were hit on September 11 2001, we were in a state of national shock. Creating a terrifying threat - hydra-like, secretive, evil - is an old trick. 2. 3. Thugs in America? 4.

Lasmo History[edit] The Company was founded in 1971 as London and Scottish Marine Oil (LASMO) to explore the North Sea.[1] It struck oil in the Ninian Field in 1974 and was first listed on the London Stock Exchange in 1977. In the early 1990s it expanded its operations into Indonesia, Algeria and Pakistan.[1] It bought Ultramar plc in 1991 in a hostile takeover battle.[2] It successfully fought off a hostile bid from Enterprise Oil in 1994.[3] It expanded into Venezuela in 1997 paying $453m for an interest in the Dacion Field. In 2001 it was acquired by Eni, who successfully outbid an initial offer from Amerada Hess.[4] References[edit] Welcome to new business opportunities [en] Librotraficante | Houston, TX 77254-0181 The Shell global homepage - Global Jump menu Shell Global Change Location Secondary Navigation | back to top Shell for Main content | back to top The Shell global homepage 2013 Shell Sustainability Report Download the PDF, order copies or visit our online report Shell publishes 2013 Sustainability Report and payments to governments data 09 Apr 2014 Royal Dutch Shell has published its Sustainability Report for 2013, which describes how it is working responsibly to help meet the world’s growing demand for energy. view all stories Most popular topics Follow us

Dice.com - Job search for Technology Professionals SCOTUSblog Gas and electricity for your home and business, supplied by EDF Energy