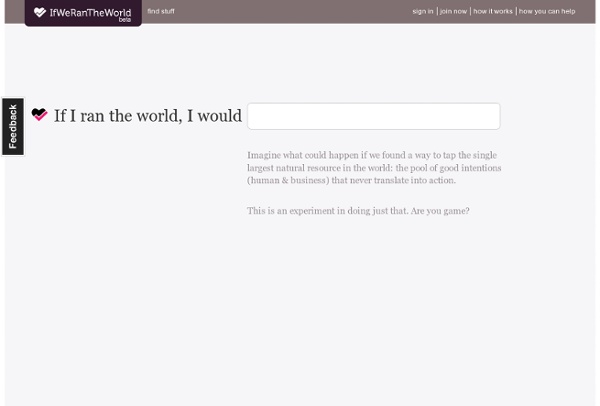 Secret Lives of Tiny People There aren't too many photo sets more fun than this... Barcelona-based photographer Oscar Ciutat put these creative scenes together by placing miniature human figurines in precarious situations. The disproportionate scale between the tiny people and their surroundings is hilarious... Puppet Building Tutorial: Ratchet There are many steps to building a puppet. This tutorial will give you detailed instructions on how I built Ratchet for the Swazzle puppet show, B.A.R.K. The Robot Dog. Click on the links below to read each step. Part 1: Starting Out

Business world not ready for millennials I’ve spent a lot of time on the road with clients lately. Among the topics we discussed, managing the changes associated with the current generational transition was the hottest. The conversations focused mainly on the differences in consumer behaviours between younger and older buyers, and in work and career orientation between millennials and those in senior management. I think the topic is not only fascinating from a human behaviour perspective, it’s also an important discussion for every management team in the country that’s looking outward at customers and inward at employees.

Inspiring action for a green and peaceful future We share these victories with our dedicated supporters around the world. In 1971, a group of activists set sail to Amchitka Island, Alaska to protest nuclear testing. As Bob Hunter, one of the crew members put it, "Whatever history decides about the big picture, the legacy of the voyage itself is not just a bunch of guys in a fishing boat, but the Greenpeace the entire world has come to love and hate." Since then, with a combination of daring action, solid science, and political pressure, Greenpeace has revealed the threats, confronted the villains and forced the solutions necessary for a green and peaceful world. We’re 100 percent supporter funded which means our fights are your fights.

7 Annoying Social Media Personality Disorders [A guest post from the talented Laura Click] There is one thing that will make or break someone’s ability to be successful in social media. No, it’s not smarts, strategy or writing skills (though, all of those things are immensely helpful). It’s personality. Yobongo: Building the Next Location-Based Social Network: Tech News and Analysis « A new iPhone app called Yobongo is launching Thursday, with plans to make building connections between locally-based, like-minded users easier. The app provides a simple chat-based interface that groups users based on location and seeks to make it easier for people to get to know each other both in-app and in the real world. Yobongo works by selecting people based on where they’re located, and grouping them together in virtual rooms of 10 to 15 users. While the app’s algorithm uses location as a starting point for grouping users together, it never explicitly reveals where a participant is located, ensuring the privacy of its users.

Jennifer Aniston Smart Water Ad Lampoons Up Viral Memes Smart Water sends up the whole idea of viral videos, with nods to memes such as Double Rainbow, animated dancing babies and lip-syncing kids, in a new ad featuring that recurring subject of Internet interest: Jennifer Aniston. The nearly 3-minute ad features Aniston, a longtime Smart Water spokeswoman, being directed to include elements that will make the ad go viral. Aniston portrays herself as a naif to such things. "I'm here to talk to you about Smart Water," says Aniston. "But in this day and age, I can't just do that, can I? ...

Mining social networks: Untangling the social web TELECOMS operators naturally prize mobile-phone subscribers who spend a lot, but some thriftier customers, it turns out, are actually more valuable. Known as “influencers”, these subscribers frequently persuade their friends, family and colleagues to follow them when they switch to a rival operator. The trick, then, is to identify such trendsetting subscribers and keep them on board with special discounts and promotions. People at the top of the office or social pecking order often receive quick callbacks, do not worry about calling other people late at night and tend to get more calls at times when social events are most often organised, such as Friday afternoons.

I talk everyday to clients who want a new website and want to be found online, but the word Social Media doesn’t even enter the conversation and isn’t included in the initial brief. They do know what Social Media is, but they have all these reasons and excuses about why they shouldn’t be integrating it into their company website and include it in their marketing strategy. So here are 28 reasons some companies aren’t using Social Media. So they are some of the reasons and excuses… so “How do you convince a CEO to enter the 21st century and implement internet marketing?” Well its 1.51am Sunday morning in Sydney, Australia and the answer to that question has to be done at another time.. I will keep you posted! The value in jumping off the “social media train” 29 December '10, 09:01pm Follow I’m on holidays and writing this from beside the pool. I’ve effectively been offline for 4 days and it’s given me the chance to think a little about social media and the Internet in general and the pace at which it moves these days. I’m not sure about you but my day goes something like this…Gmail, Twitter, Facebook, Twitter, Apps, Gmail, blogs, Twitter, repeat, repeat repeat. I know I work in social media but from talking to other people who work online their day is pretty much the same.

The State of Social Media for Businesses in 2010 as We Head into 2011 SmartBrief Inc. and market research firm Summus, Ltd. have recently published the “The State of Social Media for Business 2010” report which discusses the impact of social media in today’s business world. The report also uncovers various aspects of how businesses across various industry verticals are leveraging social media and why it has surpassed all expectations in terms of the results accomplished. In this post, I walk through the key findings of the SmartBrief report and present my opinion on how the adoption of social media is likely to change in the next couple of years. SmartBrief Report Findings The SmartBrief survey spanned 6,000 respondents across businesses of various sizes, industries and verticals.

Getting value from social media December 2009 Get past all the noise, and you may start asking some of the more challenging questions. How is the social web, and my participation in it, impacting my business?