YOLO! Does living in the United States promote teenage risk taking? Teenagers are known for taking unnecessary risks, from reckless driving to smoking marijuana, but some seek out risky experiences more than others. 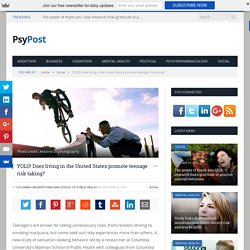 A new study of sensation-seeking behavior led by a researcher at Columbia University’s Mailman School of Public Health with colleagues from Columbia University’s Department of Psychiatry and the University of Puerto Rico School of Medicine, shows that children growing up in the United States versus Puerto Rico were more likely to seek out new and risky behaviors. “Sensation-seeking behavior in adolescents has been shown to be a factor in health risks from suicide and frequent illegal drug use to problem gambling and unprotected sex,” noted first author Silvia Martins, MD, PhD, associate professor of Epidemiology. “Our study shows that sensation-seeking behaviors don’t follow the same trajectory from childhood to adolescence in all populations: context matters.” Birth order effect on personality theory debunked - Science. Updated There is no such thing as a typical firstborn, middle child or baby of the family according to a study that debunks the idea that personality is determined by birth order. 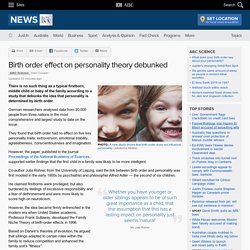 German researchers analysed data from 20,000 people from three nations in the most comprehensive and largest study to date on the issue. They found that birth order had no effect on five key personality traits: extroversion, emotional stability, agreeableness, conscientiousness and imagination. However, the paper, published in the journal Proceedings of the National Academy of Sciences, supported earlier findings that the first child in a family was likely to be more intelligent. How dominant parents affect kids’ self-worth – Science Bulletin. The study of English and Indian families living in Britain is the first to assess the impact on a child’s wellbeing of the household power structures that exist within different cultures. 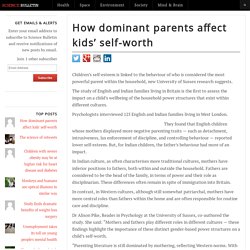 They found that English children whose mothers displayed more negative parenting traits — such as detachment, intrusiveness, lax enforcement of discipline, and controlling behaviour — reported lower self-esteem. But, for Indian children, the father’s behaviour had more of an impact. In Indian culture, as often characterises more traditional cultures, mothers have inferior positions to fathers, both within and outside the household. Fathers are considered to be the head of the family, in terms of power and their role as disciplinarian. How dominant parents affect kids’ self-worth – Science Bulletin. Kids allowed to be kids make better parents. EAST LANSING, Mich. --- Mothers who took on burdensome caregiving roles as children -- and weren't allowed to just "be kids" -- tend to be less sensitive to their own children's needs, finds new research led by a Michigan State University scholar. 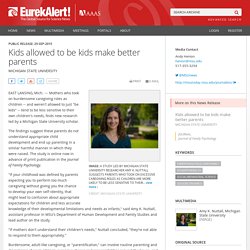 The findings suggest these parents do not understand appropriate child development and end up parenting in a similar harmful manner in which they were raised. The study is online now in advance of print publication in the Journal of Family Psychology. "If your childhood was defined by parents expecting you to perform too much caregiving without giving you the chance to develop your own self-identity, that might lead to confusion about appropriate expectations for children and less accurate knowledge of their developmental limitations and needs as infants," said Amy K.

Nuttall, assistant professor in MSU's Department of Human Development and Family Studies and lead author on the study.

Neuroimaging study shows how being in love changes the architecture of your brain. Power Can Corrupt Even the Honest. Printer friendly version Share 01 October 2014 Elsevier New research, published in The Leadership Quarterly, highlights the influence of power in leader corruption. 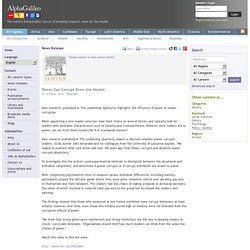 This Video Will Have You Completely Rethink How You Conduct Yourself Online And In Person (Video) World• Robert Gordon • We, as human beings, think that through social networks, we’ve somehow become more social creatures. 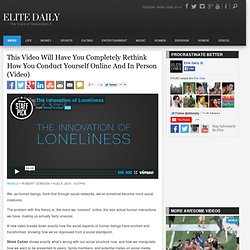 The problem with this theory is, the more we “connect” online, the less actual human interactions we have, making us actually fairly unsocial. A new video breaks down exactly how the social aspects of human beings have evolved and transformed, showing how we’ve regressed from a social standpoint. Shimi Cohen shows exactly what’s wrong with our social structure now, and how we manipulate how we want to be presented to peers, family members, and potential mates on social media, rather than having vulnerable and genuine conversations in real time.

5 Ways Social Media Is Changing Your Brain. Want to Get Out Alive? Follow the Ants - Issue 13: Symmetry. The Secret to Making a Good First Impression. Imagine you’re calling a stranger—a possible employer, or someone you’ve admired from a distance—on the telephone for the first time. 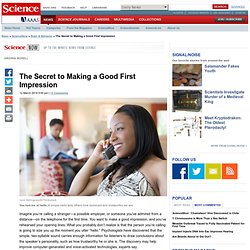 You want to make a good impression, and you’ve rehearsed your opening lines. What you probably don’t realize is that the person you’re calling is going to size you up the moment you utter “hello.” Psychologists have discovered that the simple, two-syllable sound carries enough information for listeners to draw conclusions about the speaker’s personality, such as how trustworthy he or she is. The discovery may help improve computer-generated and voice-activated technologies, experts say. Rational Romantic Relationships, Part 1: Relationship Styles and Attraction B... Part of the Sequence: The Science of Winning at Life. 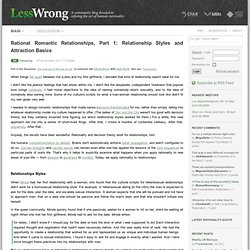