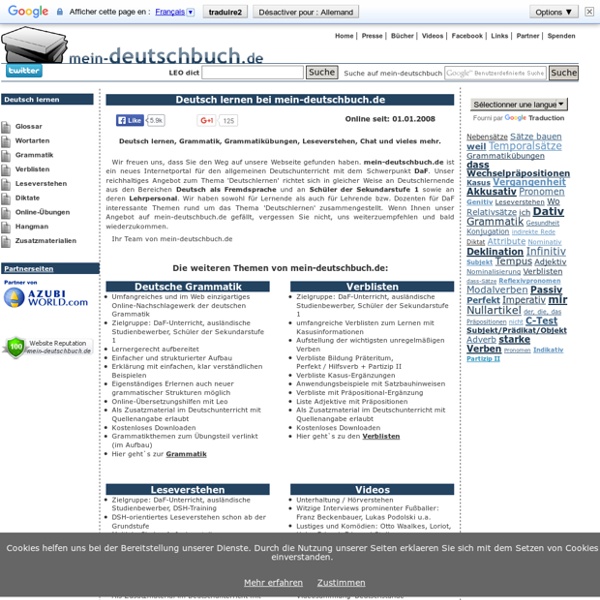 Gilde Verlag, DaF, Bärenspaß, Mega, Wer?Wie?Was? Hier finden Sie zusätzliche Arbeitsblätter zu unseren Lehrwerken bzw. Zusatzmaterialien. Jede Datei enthält mehrere Arbeitsblätter, die wir thematisch passend für Sie zusammengestellt haben. 10 Apps To Boost Your Instagram Photos (iPhone and Android!) The last couple of weeks have been huge for Instagram. First, they launched their app for Android phones (yay!) and next, they sold their 18-month-old company to that other social media giant, Facebook (for a cool $1 billion). With Instagram’s Android downloads already topping 5 million, it’s clear the photo-sharing app is hot (and not going anywhere, anytime soon)! As I’m sure you’ve noticed from our many posts, the IFB office is one of Instagram’s biggest fans, and we’re so happy we can finally share all that enthusiasm with Android smart phone users. Being the tech-savvy, bordering-on-obsessive users that we are, sometimes the app’s filters aren’t quite enough for us.

DaF - Kreuzworträtsel, Arbeitsblätter, Übungen Sie lernen - oder unterrichten - Deutsch als Fremdsprache? Wörter kann man gar nicht oft genug üben. Wir möchten, dass es »nebenbei« geschieht: hier finden Sie unterhaltsame und spannende Kreuzworträtsel, Arbeitsblätter und Übungen zum Wortschatz für DaF, und auch einige Übungen und Spiele zur Grammatik. Lernen muss nicht weh tun; man kann es auch mal mit Spaß probieren ;-) RaidersNewsNetwork.com I Breaking news, US, World, Science, Discovery, Mystery, Prophetic Creationists Buy Robot To Study Tech Impact On Humanity A group of evangelical Christians has bought a Nao robot to explore the impact of humanoid robotics and artificial intelligence on humanity . In 1925, creationists at the Scopes Trial in Tennessee argued against the theory of evolution and in favour of biblical truth. Now, 90 years later, a group of similarly fundamentalist Christians from nearby North Carolina has spent $16,000 (£9,500) on a humanoid Nao robot to explore what is arguably the next stage of evolution on Earth, the coming of the robots. The Nao is an autonomous programmable humanoid robot developed by Aldebaran Robotics based in Paris, France, and more than 200 of them are already in use at universities and colleges around the world. Stem Cell Researchers Just Figured Out How To Create New Embryos A team of researchers from the University of Virginia just made scientific history: They figured out how to turn stem cells into full blown fish embryos.

Top 6 Sites that Inspire and Educate If you’re a professional who likes to be intellectually stimulated and you enjoy keeping up with the latest news and breaking trends, the internet provides you with an endless choice of carefully curated sites to visit. Today, we bring you six of them that we believe are leaps and bounds above the rest. These sites will not only educate you on topics ranging from business and technology to art and design, they’ll motivate you to find your own, original ideas and see them through. They’re culturally relevant, they’re idea driven and most of all, they’re deeply inspirational. TED is short for three incredibly important subjects in our modern world; technology, entertainment and design.

- Upgrade your KWL Chart to th 21st Century 0 Comments July 22, 2011 By: Silvia Tolisano Jul 22 Written by: 7/22/2011 12:39 AM learn with Flashcards Group 1 Don’t settle for just any verb, learn one of the top 100 German verbs! Learn for free with audio flash cards and the dangerously addictive Lingo Dingo! Which verb will help you save the world? Done with German Verbs Group 1? Return to the German verbs menu when you have mastered Group 1 of the Top 100 German verbs.

Lackadaisy Expressions Boy, I didn't know what I was getting myself into when I started this. I've had requests for some sort of expressions tutorial dating back a while now, so I figured, "Sure! I can explain expression drawing...and it'll be way better than all those tutorials out there that are nothing but charts of generic expressions. Yeah! Bill Gates personality analysis Bill Gates: born on 10/28/1955, Seattle, 21.15 PST Explanation Human Design System When we look at the design/rave chart of Bill Gates we see that there are two areas of chakra's defined: the Ajna-center (mental awareness) is linked through channel 11-56 (curiosity, a design of a searcher) to the throat center (manifestation, verbalisation). The spleen (body awareness, instinct, intuition, fear and cleansing) is connected to the sacral center (sex drive, regeneration, power) through channel 50-27 (preservation: a design of custodianship: nourishment, responsibility, sexual diseases). However, these two areas are not linked to each other, so the design represents a 'split definition'. When one of two health channels is completed, Bills 'split' is resolved and he has a connection to the throat which, because he has a 'motor' (the Sacral), allows him to do, either in a talented way (48-16) or in the Now (57-20).