The Top 100 Productivity and Lifehack Blogs for College Students 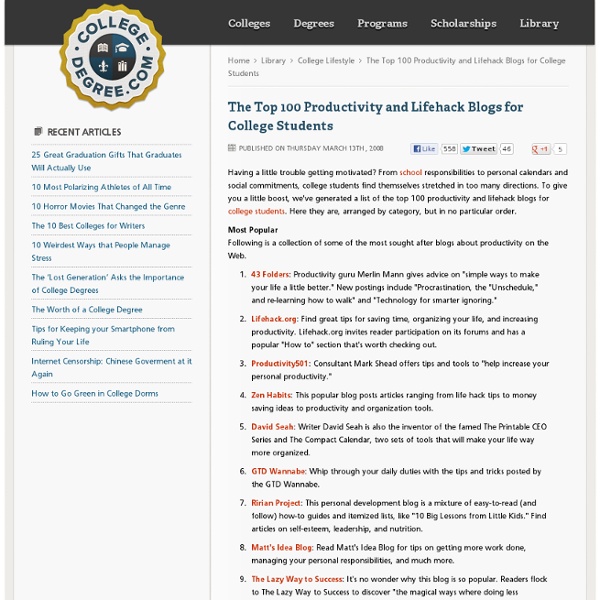 Having a little trouble getting motivated? From school responsibilities to personal calendars and social commitments, college students find themsselves stretched in too many directions. To give you a little boost, we've generated a list of the top 100 productivity and lifehack blogs for college students. Here they are, arranged by category, but in no particular order. Most Popular Following is a collection of some of the most sought after blogs about productivity on the Web. 43 Folders: Productivity guru Merlin Mann gives advice on "simple ways to make your life a little better." Organize your life with the advice and tools found on these informative blogs. Your Life. Get more done at the office with helpful tips and advice from these bloggers. The Daily Saint: Avoid being a workaholic with the tips found on this blog, which urge readers to find the right work-life balance. Let the experts share their professional approaches to organizing your life at home and at work. Did I Get Things Done?

50 Ways To Be AWESOME by Meg RulliFebruary 18, 2013 Sharebar Tony and I just completed our trip around the world and as we are reconnecting with friends and family from home, I keep getting asked the same question: “Did travel change you?” In short: Nope! Big List of Online Productivity Tools Online Office Suites Online Calendars Online Documents Online RSS Readers Startpages Invoice Managers 10 Laws of Productivity You might think that creatives as diverse as Internet entrepreneur Jack Dorsey, industrial design firm Studio 7.5, and bestselling Japanese novelist Haruki Murakami would have little in common. In fact, the tenets that guide how they – and exceptionally productive creatives across the board – make ideas happen are incredibly similar. Here are 10 laws of productivity we’ve consistently observed among serial idea executors: 1. Break the seal of hesitation. A bias toward action is the most common trait we’ve found across the hundreds of creative professionals and entrepreneurs we’ve interviewed.

How To Train Yourself To Be In The Mood You Want Dec 27, 2010 When you have major changes going on in your life, or you’re just frustrated about where you are, it’s easy to get trapped in a cycle of depression, bad moods and frustration. I know, I’ve been there … and when I’m not careful, I still get there more than I want to. But when I’ve had a particularly hard time, I hit these moments where I’m in a foul mood, or I’m just feeling paralyzed, and I’m just stuck. Sometimes I just stew in that and stay there, but sometimes I actually get intelligent and pull my way out of it.

Top 100 Free Motivational Speeches, Lectures, & Podcasts January 7, 2009 To give you a boost for the start of 2013, we've updated our top 100 free motivational audio & video learning resources that we have featured on our site. For the past seven years we've featured a Monday Motivation email every week as part of our Free Resource of the Day Emails. 50 (More) Life Secrets and Tips Investigate what is known about deathWhat do you know about death? You certainly have beliefs around it, but what do you know about the science of death, or of those who have died and been brought back to life? Death is not as big of a mystery as it is made out to be. Do your research before you fear or misconstrue this most universal human experience.Notice the small, beautiful thingsAs cliche as this sounds, there is so much beauty in the world yet we rarely appreciate it.

The Ultimate Excel Cheatsheet Working with the new Excel 2007 is now more frustrating than ever when it comes to finding the right commands. Sometimes it seems like part magic and part luck. That’s why we’ve put together the cream of the crop of Excel shortcuts in easy to use cheatsheets you can print up and keep handy. Highlighting the most commonly used and commonly looked for Excel commands, this list puts it all at your fingertips.