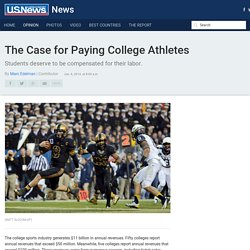 And the Big Ten Conference has launched its own television network that sells air time to sponsors during the broadcast of its football and men's basketball games. These college sports revenues are passed along to NCAA executives, athletic directors and coaches in the form of salaries. Nevertheless, the NCAA member colleges continue to vote to forbid the sharing of revenues with student-athletes. The NCAA defends its no-pay rules on several dubious grounds. NCAA faces dicey court decision that could shape its future, Lester Munson.

May 12, 2016Lester MunsonLegal Analyst CloseSenior Writer and Legal Analyst, ESPN.com 13 years as investigative reporter at Sports Illustrated Adjunct Instructor, Northwestern's Medill School of Journalism print NCAA leaders are facing a potentially historic decision this week that could either lead to the preservation of the organization's idea of athletic amateurism or radically transform college sports into the pay-for-play system that the NCAA has fought for decades. 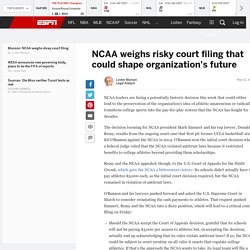 The decision looming for NCAA president Mark Emmert and his top lawyer, Donald Remy, results from the ongoing court case that first pit former UCLA basketball star Ed O'Bannon against the NCAA in 2014. O'Bannon won the initial court decision when a federal judge ruled that the NCAA violated antitrust laws because it restricted benefits to college athletes beyond providing them scholarships. The Pros and Cons of Paying College Athletes- college tips. Internship 101 – Summer Interns Internship 101 - Summer InternsI see people soliciting requests on Facebook for interns for the summer. 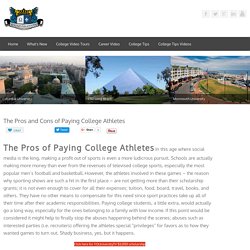 One business announced they had openings for 24 interns. Really - your business truly needs 24 interns? How is it po... How To Successfully Prepare For Exams How To Successfully Prepare For ExamsExams can be intimidating for many students, especially those who do not feel like they are ready to sit and take them. Planning Life at College: What Will It Be Like?

Planning Life at College: What Will It Be Like? The SAT Just Got A Facelift The SAT Just Got A FaceliftThings are about to get weird.Spring is here, time can travel, and the SAT is undergoing its biggest change in 10 years! Sororities: They’re Not All They Are Cracked Up To Be Sororities: They're Not All They Are Cracked Up To BeIf 2 years ago a girl would have come up to me saying she never wanted to join a sorority, I would have agreed with her and said no way. Solution Regarding Paying College Athletes or Not is Simple. There’s a clear solution to the issue of compensating college athletes more fairly. 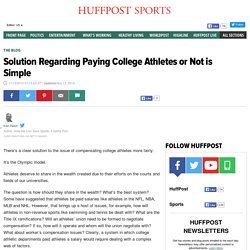 Athletes deserve to share in the wealth created due to their efforts on the courts and fields of our universities. The question is how should they share in the wealth? What’s the best system? Some have suggested that athletes be paid salaries like athletes in the NFL, NBA, MLB and NHL. However, that brings up a host of issues, for example, how will athletes in non-revenue sports like swimming and tennis be dealt with? There’s a better and easier way: let athletes benefit from their fame and likeness like every other student at our colleges and universities. Let’s Not Pay College Athletes. A Way to Start Paying College Athletes. Photo Joe Nocera is the new sports business columnist for The New York Times. 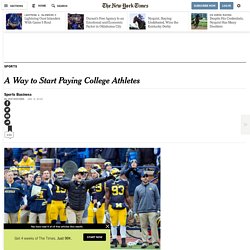 I wrote my first article for The New York Times about the four years ago. Appearing in the magazine, it was headlined “Let’s Start Paying College Athletes.” Although I had been a college basketball fan all my life, I had never paid much attention to the inner workings of the N.C.A.A. But my research woke me up to the inequities faced by college football and men’s basketball players, and compelled me to begin writing regularly about how the N.C.A.A. and the college sports establishment exploit the players who generate the billions that the grown-ups pocket.

The conceit for the original article was to imagine that the N.C.A.A.’s “amateurism” model — which, of course, enables that exploitation — had magically disappeared, finally allowing athletes to be paid. Although the N.C.A.A. had its critics four years ago, they were neither as numerous nor as visible as they are today. Here’s how it would work: