Millennials and Gen Xers Feel the Most Stress About Money. How Generation Gaps Work. It all started in the 1960s, the decade of revolutionary change that reshaped the Western world's attitudes about war, sex, religion and civil rights. 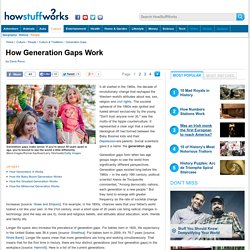 The societal upheaval of the 1960s was ignited and fueled almost exclusively by the young. "Don't trust anyone over 30," was the motto of the hippie counterculture. It represented a clear sign that a serious ideological rift had formed between the Baby Boomer kids and their Depression-era parents. Social scientists gave it a name: the generation gap. Generation gaps form when two age groups begin to see the world from significantly different perspectives. Longer life spans also increase the prevalence of generation gaps. Stress by Generations: 2012. While Millennials (ages 18 to 33) and Gen Xers (ages 34 to 47) report the highest average stress levels, Boomers (48 to 66) and Matures (67 years and older) join them in reporting levels that are higher than they consider healthy. 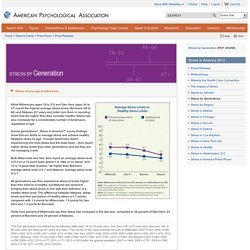 The Epidemic of Stressed Parents Raising Stressed Kids: From Generation X to Generation Stress  It's Monday. 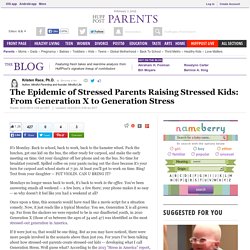 Back to school, back to work, back to the hamster wheel. Pack the lunches, get one kid on the bus, the other ready for carpool, and make the early meeting on time. Get your daughter off her phone and on the bus. No time for breakfast yourself. Spilled coffee on your pants racing out the door because it's your turn for carpool and school starts at 7:30. Mondays no longer mean back to work, it's back to work in the office. Howe_millennials.pdf. "Stress Tolerance: New Challenges for Millennial College Students" by Bland, Helen W.; Melton, Bridget F.; Welle, Paul; Bigham, Lauren - College Student Journal, Vol. 46, Issue 2, June 2012. Problem: College years have been deemed as one of the most stressful periods of a person's life (Hales, 2009). 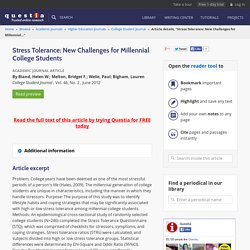 The millennial generation of college students are unique in characteristics, including the manner in which they handle stressors. Purpose: The purpose of this study was to identify lifestyle habits and coping strategies that may be significantly associated with high or low stress tolerance among millennial college students. College Freshmen Stress Levels High, Survey Finds. In the survey, “The American Freshman: National Norms Fall 2010,” involving more than 200,000 incoming full-time students at four-year colleges, the percentage of students rating themselves as “below average” in emotional health rose. Meanwhile, the percentage of students who said their emotional health was above average fell to 52 percent.

It was 64 percent in 1985. Every year, women had a less positive view of their emotional health than men, and that gap has widened. Why Are College Students Reporting Record High Levels of Stress? College students are more stressed out than ever before — at least according to the latest findings of a large, national survey that has been conducted annually for the last 25 years. 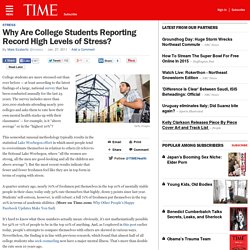 The survey includes more than 200,000 students attending nearly 300 colleges and asks them to rate how their own mental health stacks up with their classmates’ — for example, is it “above average” or in the “highest 10%”? This somewhat unusual methodology typically results in the statistical Lake Woebegon effect in which most people tend to overestimate themselves in relation to others (it refers to the fictional Lake Woebegon, where “all the women are strong, all the men are good-looking and all the children are above average”).

But the most recent results indicate that fewer and fewer freshmen feel like they are in top form in terms of coping with stress. So what’s going on? Check out a brief report on the new survey here. More on Time.com: Sleepy College Students Are Worried About Their Stress Levels. College students often are not getting enough sleep and they blame it on stress from their side jobs and a lack of time, new research concludes. 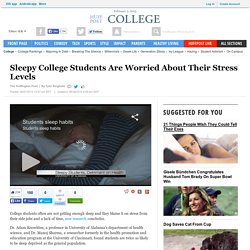 Dr. Adam Knowlden, a professor in University of Alabama's department of health science, and Dr. Manoj Sharma, a researcher formerly in the health promotion and education program at the University of Cincinnati, found students are twice as likely to be sleep deprived as the general population. The students in the survey were more worried about their sleep deprivation hindering their abilities to manage stress and concentrate at work than any long-term health impact. Previous research from the University of St. Stress in College- Common Causes of Stress In College. The Stanford Daily News Tuesday February 29, 2000. 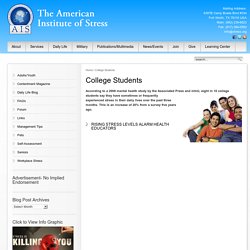 College Students. College can be an exciting time, it can also be overwhelming and stressful. 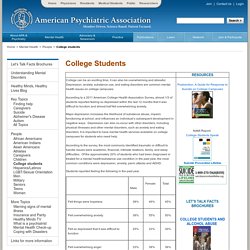 Depression, anxiety, substance use, and eating disorders are common mental health issues on college campuses. According to a 2011 American College Health Association Survey, almost 1/3 of students reported feeling so depressed within the last 12 months that it was difficult to function and almost half felt overwhelming anxiety. The kids aren't all right. There's a disconnect between what children say they're worrying about and what their parents think is stressing them, a gap that could have long-term implications for children's mental and physical health, according to APA's latest Stress in America research. 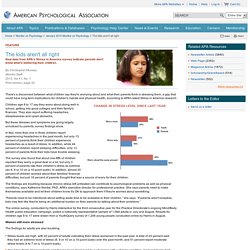 Children age 8 to 17 say they worry about doing well in school, getting into good colleges and their family's finances. They also report suffering headaches, sleeplessness and upset stomachs. But these stresses and symptoms are going largely unnoticed by parents, survey findings show. Millennials Are More Stressed Out Than Older Generations: Stress In America Survey.

Half of all millennials say their stress keeps them awake at night, according to a recent "Stress in America" survey from the American Psychological Association. 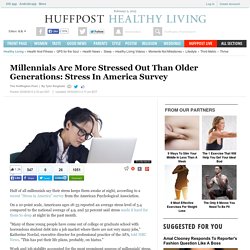 On a 10-point scale, Americans ages 18-33 reported an average stress level of 5.4 compared to the national average of 4.9, and 52 percent said stress made it hard for them to sleep at night in the past month. "Many of these young people have come out of college or graduate school with horrendous student debt into a job market where there are not very many jobs," Katherine Nordal, executive director for professional practice of the APA, told NBC News. Who's feeling stressed? Young adults, new survey shows. Stress levels for Americans have taken a decidedly downward turn across the USA — except for young adults, whose stress is higher than the national norm, says a survey to be released Thursday.

Those ages 18-33 — the Millennial generation — are plenty stressed, and it's not letting up: 39% say their stress has increased in the past year; 52% say stress has kept them awake at night in the past month. And more than any other age group, they report being told by a health care provider that they have either depression or an anxiety disorder. The online survey of 2,020 U.S. adults 18 and older, conducted in August by Harris Interactive for the American Psychological Association, has been taking the stress pulse of Americans since 2007. On a 10-point scale, where 1 means "little or no stress" and 10 means "a great deal of stress," the 2012 average is 4.9. But for Millennials, it's 5.4.

"Younger people do tend to be more stressed than older people do. "Millennials are growing up at a tough time.