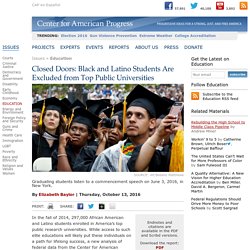 By Elizabeth Baylor | Thursday, October 13, 2016 PRINT: SHARE: Endnotes and citations are available in the PDF and Scribd versions.Download the report: PDFRead it in your browser: Scribd In the fall of 2014, 297,000 African American and Latino students enrolled in America’s top public research universities. While access to such elite educations will likely put these individuals on a path for lifelong success, a new analysis of federal data from the Center for American Progress shows that if these students were proportionately represented, another 193,000 students of color would have received the same opportunity.

Disparities in college enrollment matter, as the type of school a student attends plays a substantial role in their likelihood of successful completion. Differences in institutional completion rates translate into massive national gaps in college attainment. Conclusion. How to Live Wisely. Photo. 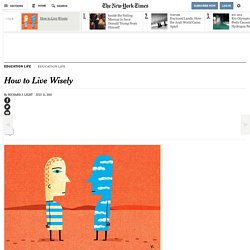 Money, Race and Success: How Your School District Compares. Educational attainment in each school district in the U.S. 3 grades ahead of average Parents’ socioeconomic status Each circle represents one school district. 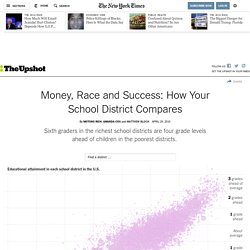 Larger circles represent districts with more students. We’ve long known of the persistent and troublesome academic gap between white students and their black and Hispanic peers in public schools. We’ve long understood the primary reason, too: A higher proportion of black and Hispanic children come from poor families. Children in the school districts with the highest concentrations of poverty score an average of more than four grade levels below children in the richest districts. After inflation, NC teacher pay has dropped 13% in past 15 years. By Kelly Hinchcliffe and Clay Johnson Raleigh, N.C. — At the start of his fourth term in 1997, North Carolina Gov. 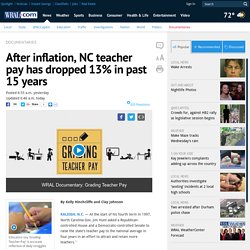 Jim Hunt asked a Republican-controlled House and a Democratic-controlled Senate to raise the state's teacher pay to the national average in four years in an effort to attract and retain more teachers. WRAL Documentaries By the time Hunt left office, North Carolina had risen in the national rankings and moved closer to the country's average teacher salary. During the 2001-02 school year, the state ranked 19th in the U.S. for average teacher pay, less than $2,000 from the then-national average of $44,655, according to the National Center for Education Statistics. But in the years since Hunt left the governor's mansion, the state's ranking has plummeted. When adjusted for inflation, North Carolina's average teacher salary has dropped more than 13 percent since 1999, according to the National Center for Education Statistics. 1999-2015: Change in teacher pay, adjusted for inflation.

Former Yale admissions officer reveals secrets of who gets in. In his new book, “The Battle for Room 314,” Ed Boland chronicles his year as a teacher in a low-income New York City school. 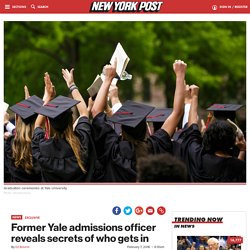 It was the polar opposite of his previous experience — assistant director of admissions for Yale University. As the class of 2016 eagerly awaits letters from colleges, Boland reveals what really goes on behind the scenes in this excerpt. Working as a gatekeeper at Yale gave me lasting insight into the formation of the American elite. My colleagues and I were sent to scour the country looking for the best and the brightest young minds. In the fall, I went everywhere, from Charleston, W.Va., to Kokomo, Ind., to Montreal, to the Upper East Side of Manhattan. Baring my soul in 500 words: How I survived 16 essays and the college application process. Katie Miller is a senior at Walter Johnson High School in Bethesda, Md., who just finished the long process of applying to college and is awaiting her decisions. 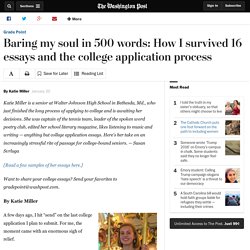 She was captain of the tennis team, leader of the spoken word poetry club, edited her school literary magazine, likes listening to music and writing — anything but college application essays. Rethinking College Admissions. Photo. 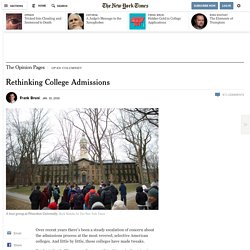 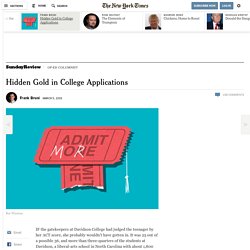 Billionaires show that going to a top college isn’t very important. Harvard commencement -- look at all that earnings potential. 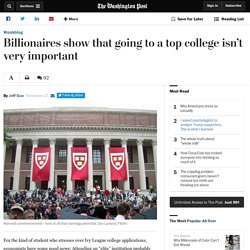 (Ian Lamont/Flickr) For the kind of student who stresses over Ivy League college applications, economists have some good news: Attending an “elite” institution probably won’t have much impact on your future earnings. The best research on this subject comes from Stacy Dale and Alan Krueger, who have shown that after controlling for individual ability, the selectivity of your alma mater doesn’t particularly matter. A dozen unconventional ways to improve college admissions. (Jim R. 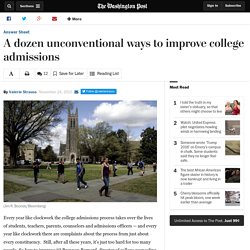 Higher Ed's Moneyball? : NPR Ed. Our Ideas series is exploring innovation in education. It's 20-year-old Randall Lofton's third shot at college. He's already wiped out twice. Too much partying and basketball, he says, and not enough studying. "I didn't apply myself. " Lofton is now trying to balance a full-time job with three classes at community college. How to Choose a Topic for Your Common App Essay. Contributed image, Michele Turk By Michele Turk, Founder, A Bloc of Writers You’ve never trekked through the jungles of Thailand, volunteered on a mission trip abroad or founded a non-profit organization?

Don’t worry — you will still find something to write about in your college application essay and get into a competitive college. One of the most nerve-wracking and intimidating aspects of the college application process is writing the college admissions essay. Many students become preoccupied with the notion that they need to write about a life-changing adventure or an enormous personal challenge to impress college admission officers. “Nothing bad has ever happened to me!” Like Fares On A Plane, College Tuition Bills Vary Widely : NPR Ed. My hard lessons teaching community college. “Stand up if you have ever been told that you weren’t college material,” the school president booms during the commencement ceremony.