20 Awesome Do It Yourself Projects 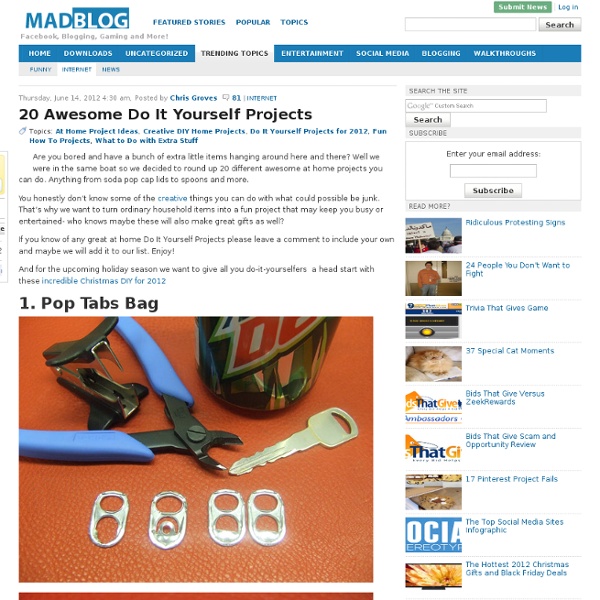 Thursday, June 14, 2012 4:30 am, Posted by Chris Groves | Internet 20 Awesome Do It Yourself Projects Topics: At Home Project Ideas , Creative DIY Home Projects , Do It Yourself Projects for 2012 , Fun How To Projects , What to Do with Extra Stuff Are you bored and have a bunch of extra little items hanging around here and there? Well we were in the same boat so we decided to round up 20 different awesome at home projects you can do. Anything from soda pop cap lids to spoons and more. You honestly don’t know some of the creative things you can do with what could possible be junk. If you know of any great at home Do It Yourself Projects please leave a comment to include your own and maybe we will add it to our list. And for the upcoming holiday season we want to give all you do-it-yourselfers a head start with these incredible Christmas DIY for 2012 1. More info: here | Buy: here 2. More info: here 3. 4. 5. 6. 7. 8. 9. 10. 11. 12. 13. 14. 15. 16. 17. 18. 19. 20. Incoming search terms:

111 Web Apps to Rule Them All Our original roundup of 100 Web Apps to Rule Them All was published in May, 2011. Nearly a year later, we’re back with over a dozen new apps … and sadly with a few of our original favorites removed since they hit the deadpool. We’ve added the newest apps to the top of this roundup article, so you can quickly see our new favorites. Today, more than ever before, you can get much of your work done right from your browser.

Ten Ways to Dress Up a Ponytail Sometimes I'm just not in the mood to spend a lot of time on my hair. But at the same time, I don't want to look like a homeless hairdresser when I go to work, so I try to make my ponytails as fancy as possible. Here are ten easy ways I like to dress up my ponytail: 1. Starting an Etsy Shop? Here are 8 Articles You Must Read First Gypsy earrings – handmade chandelier earrings – Gypsy, Yellow Article by: Jenny Hoople Lots of people have been asking me lately what they should know about setting up a shop on Etsy. Here I’ve gathered together the articles that have been golden nuggets of advice for me in a sea of information. Know at the beginning that making amazing products is only half the battle, the other half of your time will be making sure that the right people are aware of them.

14 natural items for your alternative first aid kit Cloves. Photo by Elenadan Find out which multitasking natural remedies merit a spot in your backpack. 20 brilliant things to make in a jar Via: mycakies.blogspot.com Start saving your old jam jars! From cakes to herb gardens, pies to photo frames, and even entire meals … here are 20 fantastic things you never knew you could make with a jar. (Above: red velvet cupcakes in a jar. Yellowstone Is Rising on Swollen "Supervolcano" November 8, 2007 Yellowstone National Park is rising. Its central region, called the Yellowstone caldera, has been moving upward since mid-2004 at a rate of up to three inches (seven centimeters) a year—more than three times faster than has ever been measured. The surface is inflating like a bellows due to an infusion of magma about 6 miles (10 kilometers) underground, according to a new study published in tomorrow's issue of the journal Science.

A Splendid Assemblage: Favorite Up-Do Hairstyle Tutorials for Summer Hair has always been my "thing" but I do develop certain "shave it all off" tendencies at least once a year. So far I haven't..I do wonder how that would feel though. There are so many fantastic hair tutorials out there that even in this heat I really don't mind how long my hair is.Except when my bangs get too long and then everything turns dark.

A Beautiful Mess I love using cloth napkins to dress up our dinner table, and through the years I've grown even more fond of their sustainability and cost effectiveness. Though, I'm not sure how cost effective it is if you keep buying more and more cloth napkins each year! This holiday season I thought it would be fun to look at how I could dress up the napkins I already own to give them an extra festive vibe. Check out three simple ways you can give new life to your table linens. 6 Ways To Reuse Orange Rinds - Recyclebank Recently, Sebrina wrote about amazing uses for lemons beyond eating. That got me thinking about another citrus fruit, the orange. Attribution: via Darwin Bell on Flickr Recently, Sebrina wrote about amazing uses for lemon beyond eating.

Free People Clothing Boutique Blog UPDATE: This post originally ran on March 23 2011, but with summer winding down we wanted to bring it back up for some late summer inspiration! a fellow fp girl sent this to me a couple weeks back and i’ve been thinking about it ever since! i can think of a million reasons why these would be awesome… as apartment décor, as outdoor party décor, and – wouldn’t they be the best thing EVER for camping in general or at a festival? just let them sit in the sun all day, and they’ll last all night! i am absolutely going to make some to bring with me to bonnaroo this year.

Yellowstone Has Bulged as Magma Pocket Swells The simmering volcano has produced major eruptions—each a thousand times more powerful than Mount St. Helens's 1980 eruption—three times in the past 2.1 million years. Yellowstone's caldera, which covers a 25- by 37-mile (40- by 60-kilometer) swath of Wyoming , is an ancient crater formed after the last big blast, some 640,000 years ago. (See "When Yellowstone Explodes" in magazine.) Since then, about 30 smaller eruptions—including one as recent as 70,000 years ago—have filled the caldera with lava and ash, producing the relatively flat landscape we see today. Craft DIY Projects, Patterns, How-tos, Fashion, Recipes @ Craftzine.com - Felting, Sewing, Knitting, Crocheting, Home & More Quilling, the coiling and shaping of narrow paper strips to create a design, has been around for years — hundreds, in fact. During the Renaissance, nuns and monks would roll gold-gilded paper remnants trimmed during the bookmaking process, and use them to decorate religious objects as an alternative to costly gold filigree. Quilling later became a pastime of 18th and 19th century young ladies in England, who would decorate tea caddies and pieces of furniture with paper filigree. The practice crossed the Atlantic with colonists, who added quilling to candle sconces and trays as home decorations. In all of that time, the process has remained very much the same, but quilling designs and specialty supplies have definitely caught up to the 21st century.

A bit of green Hello everyone! This is a quick post to share a (not so quick) DIY I did a while ago for Alex, a snow globe made from an empty light bulb. I have a soft heart for snow globes, among chocolate, cats and various other things, and I figured it would be awesome if I managed to make one myself! I should tell you from the start, however, that this is one of the most tricky crafts I have done so far and also the only one that failed after one year of use: the tricky part it to perfectly seal the light bulb, which, apparently, I wasn’t able to do… but perhaps you will! Posted by Kynthia on December 1st 2013 in arts :: crafts