LYRICS TO LIVE BY 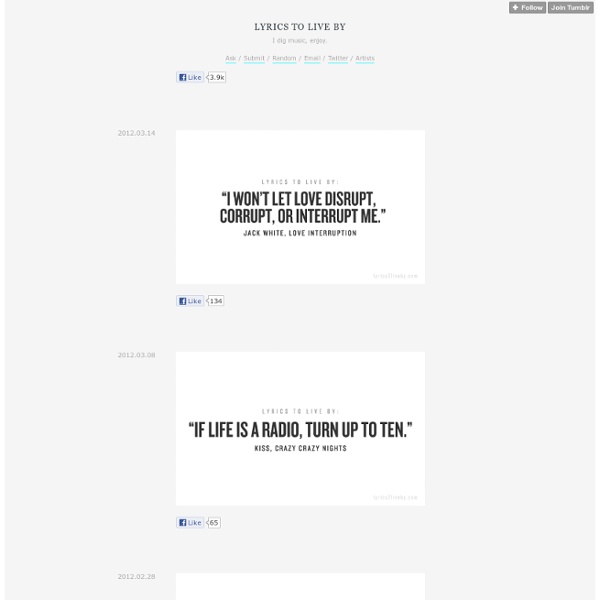 Amazing DIY & Crafts Ideas #2 Cupcake pin cushion via (dollarstorecrafts) Magazine rolled up bowl Mosaic Ornaments from CDs Pallet – just stain and take out some slats. Top 100 Best Acoustic Songs Ever -The Greatest of All Time Here is a list of the best acoustic songs ever written. Acoustic music has come a long way over the years, so many are “oldies” and many are “newies.” We are basing this list off of historical album sales, the ever so objective factor of acoustic-ness, but mostly how easily they make us cry.

Quotes: Wise quotes Some wise and funny quotes from famous and anonymous people. 1. Advertising modern art 2. Dalai Lama’s 18 rules for living lifestyle Take into account that great love and great achievements involve great risk. When you lose, don’t lose the lesson. Follow the three Rs: Respect for selfRespect for othersResponsibility for all your actions.Remember that not getting what you want is sometimes a wonderful stroke of luck.Learn the rules so you know how to break them properly.Don’t let a little dispute injure a great friendship.When you realize you’ve made a mistake, take immediate steps to correct it. Spend some time alone every day.Open your arms to change, but don’t let go of your values. Remember that silence is sometimes the best answer.Live a good, honourable life.

Who Are All Those People In Sgt Peppers Lonely Hearts Club Band - Spacious Planet The album art from Sgt Peppers Lonely Hearts Club Band by The Beatles is one of the most popular album covers in music history. The cover is a collage of more than 60 famous people. Most of the people selected for the collage were requested by The Beatles. For example, George Harrison requested the three Hindu gurus who appear in the collage. Lennon requested Adolf Hitler, Mahatma Gandhi and Jesus Christ. However, Jesus and Hitler were rejected because the record label feared a public backlash.

Japanese graphic design from the 1920s-30s In the 1920s and 1930s, Japan embraced new forms of graphic design as waves of social change swept across the nation. This collection of 50 posters, magazine covers and advertisements offer a glimpse at some of the prevailing tendencies in a society transformed by the growth of modern industry and technology, the popularity of Western art and culture, and the emergence of leftist political thought. "Buy Domestic!"

30 Funny Illustrations about Simple Truths of Life While surfing Internet the I came across the blog of Alex Noriega an illustrator from Barcelona, he has some interesting life lessons that our parents and teachers may have forgotten to tell us and he presented them in the form of some really funny illustrations. In this post I am posting 30 Funny Illustrations about Simple Truths of Life that I have picked from his blog. Hope you all will enjoy this post.

20 fantastic ways to find new music that you like (no Last.fm & Pandora inside) OK, everybody knows that Last.fm & Pandora are great services, but there are a lot of other tools that can help us to find new cool music. Some of them just expose daily musical goodies, others make recommendations based on your very own preferences, and others take the web interactivity ever further. Explore the best 20 ways to discover new music in a web 2.0 world. The Most Expensive Property In Brooklyn, New York A stunning triplex penthouse apartment that overlooks the Brooklyn Bridge and New York Harbour has just been listed for $25 million USD, making it the most expensive property in Brooklyn (if it sells mind you). The penthouse sits atop one of the tallest buildings in Dumbo, the cobblestoned neighborhood that sprang to life in the 80s in a former industrial area between the Brooklyn and Manhattan Bridges. Unsurprisingly, the apartment was commissioned by David Walentas, the creator of the Dumbo neighborhood (I hate this name!).

Earth Day Quotes, World Environment Day Sayings Related Quotes Environment Helping Arbor Day Car-Free Nature Every day is Earth Day. ~Author Unknown I conceive that the land belongs to a vast family of which many are dead, few are living, and countless numbers are still unborn. The Top 100 Seventies Singles presents ere's the inside story -- along with links to midis, lyrics and videos -- on the Top 100 singles of the Seventies. Songs we listened to on AM radios at home... in cars... at the beach. From unforgettable masterpieces by major superstars (Marvin Gaye's "Let's Get It On") to definitive singles by forgotten greats (Jim Croce's "Bad, Bad Leroy Brown") to fun, quirky novelties by one-hit wonders (Terry Jacks' "Seasons In The Sun"), these 100 most popular songs of the Seventies are a fascinating combination of the sublime and the ridiculous.

Unidentified Lifestyle by Maria Matiopoulou: things that made me smile this week This week was tough, tough in a way that the weekend felt like it would never arrive! But it did and I realized how important it is to spent some quiet time at home. I'm still in the (really slow) process of decorating our apartment and Christmas is just around the corner so I thought it was about time to go out and start writing down my Christmas lists. Saturday was dedicated to Harrods, it took a while to take my eyes off their windows but when I did I headed straight to the homeware floor. An Interior Designers heaven.