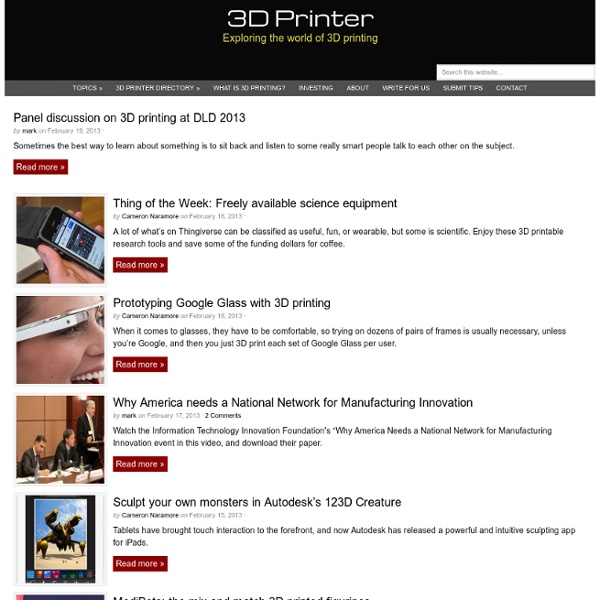 Comment une antenne imprimée en 3D pourrait changer Manufacturing 0 Flares Twitter 0 Facebook 0 Google+ 0 Pin It Share 0 LinkedIn 0 inShare0 Reddit 0 0 Flares × Many people question the utility of 3D printers because they believe they’re only capable of printing simple plastic parts. 3D printers are capable of much more. For a while now they’ve been creating objects from glass, ceramic, and metals, among other basic materials. The Tkinter Canvas Widget The Canvas widget provides structured graphics facilities for Tkinter. This is a highly versatile widget which can be used to draw graphs and plots, create graphics editors, and implement various kinds of custom widgets. When to use the Canvas Widget The canvas is a general purpose widget, which is typically used to display and edit graphs and other drawings. Another common use for this widget is to implement various kinds of custom widgets. For example, you can use a canvas as a completion bar, by drawing and updating a rectangle on the canvas.

Markus Kayser Builds a Solar-Powered 3D Printer that Prints Glass from Sand and a Sun-Powered Cutter Industrial designer and tinkerer Markus Kayser spent the better part of a year building and experimenting with two fantastic devices that harness the sun’s power in some of the world’s harshest climates. The first he calls a Sun Cutter, a low-tech light cutter that uses a large ball lens to focus the sun’s rays onto a surface that’s moved by a cam-guided system. As the surface moves under the magnified light it cuts 2D components like a laser. The project was tested for the first time in August 2010 in the Egyptian desert and Kayser used thin plywood to create the parts for a few pairs of pretty sweet shades. But he didn’t stop there. Next, Kayser began to examine the process of 3D printing.

Rapport McKinsey identifie également l'impression 3D comme une technologie disruptive clé 1 Flares Twitter 0 Facebook 0 Google+ 1 Pin It Share 0 LinkedIn 0 inShare0 Reddit 0 1 Flares × James Manyika and other researchers at McKinsey have identified 3D printing as a key disruptive technology and believe by 2025 it will have a significant impact on the global economy. They forecast that by 2025, 3D printing in total could have an economic impact of $230 – $550 billion based on its ability to reduce cost and create value through customization.

Researchers cloak free-standing 3D object using plasmonic metamaterials We've previously seen - or should that be "not seen" - invisibility cloaks in the laboratory that are able to render two-dimensional objects invisible to microwaves. Such feats relies on the use of metamaterials - man-made materials that exhibit optical properties not found in nature and have the ability to guide light around an object. Now researchers at the University of Texas at Austin (UT) claim to have brought invisibility cloaks that operate at visible light frequencies one step closer by cloaking a three-dimensional object standing in free space with the use of plasmonic metamaterials. Although, like previous studies, the UT team was only able to cloak an object to microwaves, they claim the technique enabled by the use of plasmonic metamaterials could, in principle, be applied to visible light. To cloak an 18 cm (7 in) long, 2.5 cm (0.9 in) diameter cylindrical tube from microwaves, the team shelled it in a plasmonic metamaterial.

This 3D printer makes edible food - Jan. 24, 2011 An experimental 3D food printer "prints" frosting on a cupcake.By Laurie Segall, staff reporterJanuary 24, 2011: 10:11 AM ET NEW YORK (CNNMoney) -- A 3D food printer sounds like something out of Star Trek, but it's not out of this world. It's up and running at the French Culinary Institute in Manhattan -- and in five years, it could be in your home. As part of a project at Cornell University, a group of scientists and students built a 3D printer and began testing it out with food. The device attaches to a computer, which works as the "brain" behind the technology.

Potential Cost, Eco & Functional Benefits of 3D Printing Mobile Device Antennae Optomec Inc, an often overlooked OEM of industrial 3D printers, recently announced the development of a digital production solution that enables the direct printing of mobile device antennae. This solution is based on Optomec’s proprietary Aerosol Jet Printed Electronics technology, an Additive Manufacturing (AM) process used to print electronics directly on to 3D surfaces. For this application, the Aerosol Jet technology is used to directly print 3D antennae onto plastic inserts and enclosures for smart phones and other devices. As well as functional benefits, such as reducing the overall thickness of the handheld devices, the new 3D-printed antenna solution may potentially also reduce logistics, material consumption and overall processing and offer health & safety and environmental benefits. This is because the process eliminates the use of chemical plating and the hazardous nickel content used in current manufacturing methods.

Activities> Tf-emc2 TF-EMC2, the TERENA Task Force on European Middleware Coordination and Collaboration, started its mandate in September 2004. Over the years TF-EMC2 has given birth to several activities, such as SCHAC, REFEDs, TACAR and so on. All these activities are still coordinated within the task force, although they have an autonomous life. Secretarial support for this task force is provided by TERENA with funding from the GN3 project. In 2010, the mandate of the TF-EMC2 was renewed by the TERENA Technical Committee for another two-year period.