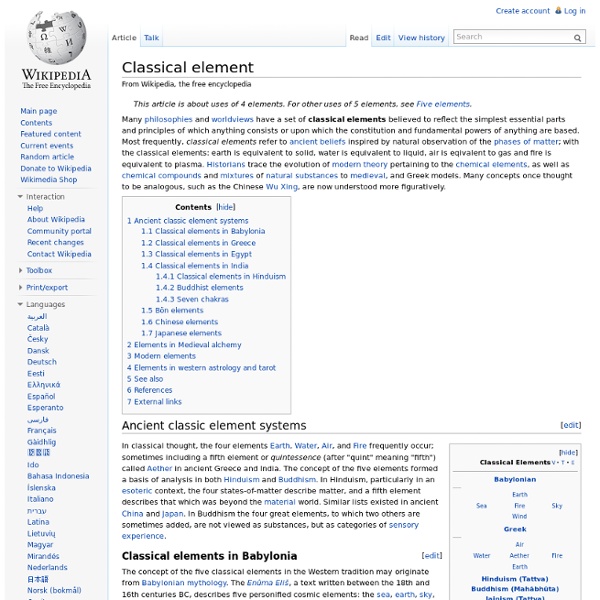 Segment of the macrocosm showing the elemental spheres of terra (earth), aqua (water), aer (air), and ignis (fire). Robert Fludd. 1617. Many philosophies and worldviews have a set of classical elements believed to reflect the simplest essential parts and principles of which anything can consist or upon which the constitution and fundamental powers of everything are based. Most frequently, classical elements refer to ancient concepts which some science writers compare to the modern states of matter, relating earth to the solid state, water to liquid, air to gaseous and fire to plasma.[1][2] Historians trace the evolution of modern theory pertaining to the chemical elements, as well as chemical compounds and mixtures of chemical substances to medieval, and Greek models. Ancient[edit] Cosmic elements in Babylonia[edit] Greece[edit] Plato characterizes the elements as being pre-Socratic in origin from a list created by the Sicilian philosopher Empedocles (ca. 450 BC). Medieval alchemy[edit]

Sulfur Sulfur occurs naturally as the pure element (native sulfur) and as sulfide and sulfate minerals. Elemental sulfur crystals are commonly sought after by mineral collectors for their distinct, brightly colored polyhedron shapes. Being abundant in native form, sulfur was known in ancient times, mentioned for its uses in ancient India, ancient Greece, China and Egypt. Fumes from burning sulfur were used as fumigants, and sulfur-containing medicinal mixtures were used as balms and antiparasitics. Sulfur is referred to in the Bible as brimstone (burn stone) in English, with this name still used in several nonscientific tomes.[3] It was needed to make the best quality of black gunpowder. In 1777, Antoine Lavoisier helped convince the scientific community that sulfur was a basic element rather than a compound. Elemental sulfur was once extracted from salt domes where it sometimes occurs in nearly pure form, but this method has been obsolete since the late 20th century. Characteristics[edit]

Wood Element Traditional Chinese Medical Theory -Law of Five Wood Element - Liver In Balance:You are a highly confident and motivated person! You have the power to envision the future and you have incredible insight. Wood Element is all about growth, change, and expansion. Wood is of the spring, when the grass shoots up and the Earth is vital, and full of activity. Out of Balance:If the Wood Element is out of balance, or is blocked from fully expressing itself, you may lack the qualities above, or have lost them over time as the imbalance has grown more severe. In Chinese medicine, as in reality, there is no way to separate the mind and the body. Physical and Emotional Symptoms that occur with a Wood Element Imbalance include: Wood Element and SpringSpring is designated to the Wood Element, and the qualities of spring such as sudden change and volatile weather are reflected in the way that the body can reflect the Wood Element attributes.

Corpuscularianism Corpuscularianism is a physical theory that supposed all matter to be composed of minute particles, which became important in the seventeenth century. Among the leading corpuscularians were Pierre Gassendi, Robert Boyle, and John Locke.[1] Corpuscularianism is similar to the theory of atomism, except that where atoms were supposed to be indivisible, corpuscles could in principle be divided. In this manner, for example, it was theorized that mercury could penetrate into metals and modify their inner structure, a step on the way towards the production of gold by transmutation. Corpuscularianism was associated by its leading proponents with the idea that some of the properties that objects appear to have are artifacts of the perceiving mind: "secondary" qualities as distinguished from "primary" qualities.[2] Corpuscularianism stayed a dominant theory for centuries and was blended with alchemy by early scientists such as Robert Boyle and Isaac Newton in the 17th century. Sources[edit]

Structure of the Earth Structure of the Earth Assumptions[edit] The force exerted by Earth's gravity can be used to calculate its mass, and by estimating the volume of the Earth, its average density can be calculated. Astronomers can also calculate Earth's mass from its orbit and effects on nearby planetary bodies. Structure[edit] Earth's radial density distribution according to the preliminary reference earth model (PREM).[1] Earth's gravity according to the preliminary reference earth model (PREM).[1] Comparison to approximations using constant and linear density for Earth's interior. The layering of Earth has been inferred indirectly using the time of travel of refracted and reflected seismic waves created by earthquakes. Core[edit] The average density of Earth is 5,515 kg/m3. The inner core was discovered in 1936 by Inge Lehmann and is generally believed to be composed primarily of iron and some nickel. Mantle[edit] World map showing the position of the Moho. Crust[edit] See also[edit] References[edit]

CAYA Coven Water Element Chinese Medicine - Five Element Theory - Fear Chinese Medicine and the Water Element - Kidney In Balance:You are clever, articulate, and evasive! You are introspective and your thoughts run deep. You have a calm energy that calms everyone around you. Your mind is lucid and you take in knowledge as you observe life, making you wiser than your years would suggest. Water Element is all about collective intelligence and DNA. Water is of the winter, when we pull back to our hibernation dens and rest and renew our reserves. Out of Balance:If the Water Element is out of balance, or is blocked from fully expressing itself, you may lack the qualities above, or have lost them over time as the imbalance has grown more severe. In Chinese medicine, as in reality, there is no way to separate the mind and the body. The Water Element includes the kidneys and bladder, but the energetic organ system which is recognized in Chinese medicine is much more complex than just the tissue of these organs.

Salt (chemistry) There are several varieties of salts. Salts that hydrolyze to produce hydroxide ions when dissolved in water are basic salts, whilst those that hydrolyze to produce hydronium ions in water are acidic salts. Neutral salts are those that are neither acid nor basic salts. Usually, non-dissolved salts at standard temperature and pressure are solid, but there are exceptions (see Molten salts and ionic liquids). Potassium dichromate, a bright orange salt used as a pigment Salts exist in many different colors, for example: Most minerals and inorganic pigments, as well as many synthetic organic dyes, are salts. Solid salts do not conduct electricity. The name of a salt starts with the name of the cation (e.g., sodium or ammonium) followed by the name of the anion (e.g., chloride or acetate). Common salt-forming cations include: Common salt-forming anions (parent acids in parentheses where available) include: Solid lead(II) sulfate (PbSO4) Salts are formed by a chemical reaction between:

Volcano A 2007 eruptive column at Mount Etna producing volcanic ash, pumice and lava bombs Santa Ana Volcano, El Salvador, a close up aerial view of the nested summit calderas and craters, along with the crater lake as seen from a United States Air Force C-130 Hercules flying above El Salvador. Erupting volcanoes can pose many hazards, not only in the immediate vicinity of the eruption. One such hazard is that volcanic ash can be a threat to aircraft, in particular those with jet engines where ash particles can be melted by the high operating temperature; the melted particles then adhere to the turbine blades and alter their shape, disrupting the operation of the turbine. Etymology Plate tectonics Map showing the divergent plate boundaries (OSR – Oceanic Spreading Ridges) and recent sub aerial volcanoes. Divergent plate boundaries Convergent plate boundaries Subduction zones are places where two plates, usually an oceanic plate and a continental plate, collide. "Hotspots" Volcanic features Lava domes