20 Things I Learned While I Was in North Korea 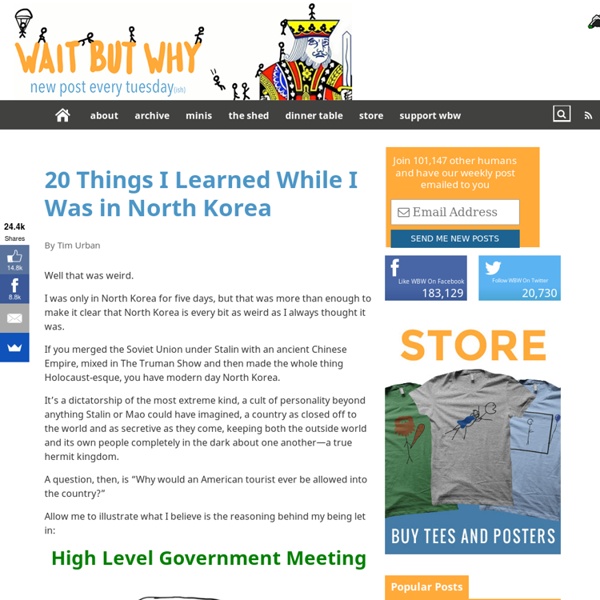 Well that was weird. I was only in North Korea for five days, but that was more than enough to make it clear that North Korea is every bit as weird as I always thought it was. If you merged the Soviet Union under Stalin with an ancient Chinese Empire, mixed in The Truman Show and then made the whole thing Holocaust-esque, you have modern day North Korea. It’s a dictatorship of the most extreme kind, a cult of personality beyond anything Stalin or Mao could have imagined, a country as closed off to the world and as secretive as they come, keeping both the outside world and its own people completely in the dark about one another—a true hermit kingdom. A question, then, is “Why would an American tourist ever be allowed into the country?” Allow me to illustrate what I believe is the reasoning behind my being let in: High Level Government Meeting And so, I was allowed in, along with a small group of other Westerners, accompanied (at all times) by three North Korean guides. 1. 2. 3. This is it. Related:  Studies in consciousness

Raechl | Herself. Where did you grow up? Holland, Mi. The Bible-beltline of the state. Were you brought up religiously/secularly/other? As much as our peers seemed to demand it, my mother was vigilant in keeping my childhood relatively open when it came to the possibilities of religious belief. Was there turbulence throughout your childhood/adolescence? Growing up in a Southwest Michigan town with a lesbian mother and a childish, mostly-absent father will cause some turbulence, definitely. Were you ever embarrassed about your development/puberty? With a mother as supportive as mine, I tended to dabble in gender-fluidity and sexuality but never felt any embarrassment over it, as I had been raised with the ideal that exploring aspects of ourselves is the greatest adventure we’re able to embark upon. Can you remember any key moments in your formative years that shaped you? Yes. Any that shaped your perspective of women? When did you become aware of your gender? Have you ever struggled with your sexuality? Yes.

Food Timeline: food history research service Say Yes To The Stress In relationships, you can have identical actions that generate vastly different consequences. Kind of like watching “Say Yes To The Dress.” Which is to say that my wife adores watching fluffy wedding shows where the bride tries on a zillion froofy outfits, parading this latest dress in front of her family, before finally settling tearfully on the perfect dress. The bride flutters her hands in front of her face. Tears mean that this is the perfect dress. Gini tears up, too. And sometimes, when Gini is having a bad day, she needs to curl up and watch a “Say Yes To The Dress” marathon. We have one big television, so if she watches it, then I can’t spend my Saturday ferociously trying to beat the new Dragon Age game on the Xbox. Yet I recognize watching silly wedding shows makes Gini happy, and as such it’s a worthy thing to do. Which is to say that I occasionally get emails like, “Hey, I’m polyamorous, but I want my monogamous partner to be happy. But we never resented.

Apophenia makes unrelated things seem connected: Metaphors, paranormal beliefs, conspiracies, delusions. Photo illustration by Lisa Larson-Walker. Photos by Green Mamba/Flickr and Thinkstock. In the opening chapter of Book 1 of My Struggle, by Karl Ove Knausgaard, the 8-year-old narrator sees a ghost in the waves. He is watching a televised report of a rescue effort at sea—“the sky is overcast, the gray-green swell heavy but calm”—when suddenly, on the surface of the water, “the outline of a face emerges.” Katy Waldman is a Slate staff writer. We might guess from this anecdote that Karl, our protagonist, is both creative and troubled. A German scientist named Klaus Conrad coined apophanie (from the Greek apo, away, and phaenein, to show) in 1958. In statistics, a problem akin to apophenia is a Type I error, or false positive. Yet apophenia can also lure us into false and damaging convictions. So apophenia cuts both ways—it’s a profoundly human habit of mind that can underlie adaptive behaviors and reward flights of fancy, or induce all kinds of paranoia and silliness. David J.

Here's The Schedule Very Successful People Follow Every Day All too often, productivity tips are a dime a dozen. Some even conflict with each other. What we need is a system. What schedule do the pros use? What system does science say allows us to be most productive? What’s key is feeling in control and making sure your energy levels are matched to the importance of the task at hand. Let’s assemble the expert ideas and research we’ve covered into a more cohesive schedule you can apply to your day. How do you do that? 1) The Morning Ritual Laura Vanderkam studied the schedules of high-achievers. You need to wake up before the insanity starts. If you want to achieve work-life balance you need to determine what is important and focus on that. Having concrete goals was correlated with huge increases in confidence and feelings of control. Via The 100 Simple Secrets of Successful People: As I’ve discussed before, the second part of your morning ritual is about mood. (For more on morning rituals, click here.) You’ve got your goal and you’re in control. Sum Up

The Procrastination Matrix Note: To best understand this post, you should first read Part 1 of Wait But Why’s previous post on procrastination. PDF: We made a fancy PDF of this post for printing and offline viewing. Buy it here. (Or see a preview.) Back in high school, if you had asked me if I was a procrastinator, I would have said yes. High school students are given all these lectures about “pacing yourself” on longer projects, and I proudly paced myself less than almost anyone I knew. Except I wasn’t. There was definitely an Instant Gratification Monkey in my head, but he was cute more than anything. One day, high school ended, and so did my life as a somewhat normal-acting person. Without deadlines to occupy him, my Panic Monster, who can’t think too far ahead, began to spend a lot of time in hibernation. The more the Panic Monster slept, the more confidence the monkey gained. The RDM would slip further into despair, and only the times when things reached their most dire would anything change. Not quite.

The Truth About Religion in America: The Founders Loathed Superstition and We Were Never a Christian Nation Once they begin to circulate, falsehoods—like counterfeit currency—are surprisingly tenacious. It doesn’t matter that there’s no backing for them. The only thing that counts is that people believe they have backing. Then, like bad coins, they turn up again and again. One counterfeit idea that circulates with frustrating stubbornness is the claim that America was founded as a Christian nation. Unlike some of the wackier positions taken by evangelicals—think Rapture—the claim that America was founded as a Christian nation has gone relatively mainstream. So the notion that America was founded as a Christian nation is widespread. There are three primary candidate groups, and each is regularly invoked by the Christian Right. Puritans as Founders Cynthia Dunbar is among those who believe that the Puritans who began migrating to New England in the first half of the seventeenth century are our nation’s founders. This sounds good on a first run-through. Christian Majority as Founders

The Sunk Cost Fallacy The Misconception: You make rational decisions based on the future value of objects, investments and experiences. The Truth: Your decisions are tainted by the emotional investments you accumulate, and the more you invest in something the harder it becomes to abandon it. You can learn a lot about dealing with loss from a video game called Farmville. You have probably heard of this game. Farmville has shrunk since then. So, it must be really, really fun. In psychologist Daniel Kahneman’s book, Thinking Fast and Slow, he writes about how he and his colleague Amos Tversky through their work in the 1970s and ‘80s uncovered the imbalance between losses and gains in your mind. Behavioral economist Dan Ariely adds a fascinating twist to loss aversion in his book, Predictably Irrational. In one of his experiments, Ariely set up a booth in a well-trafficked area. If people acted on pure mathematical logic, explained Ariely, there should have been no change in the behavior of the subjects.