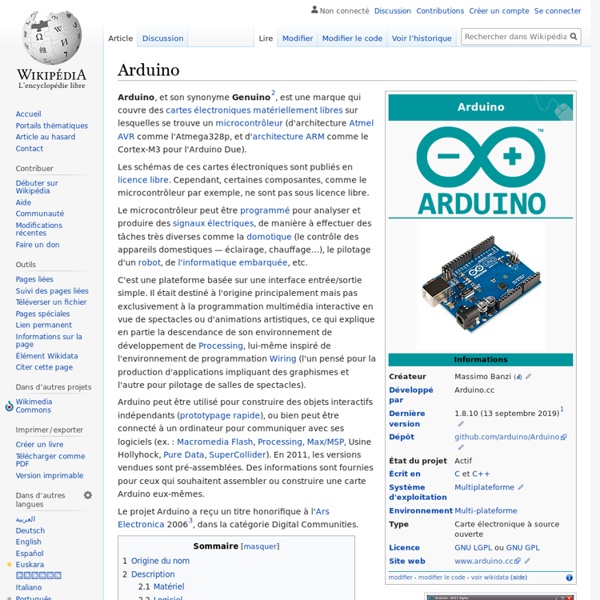 Scratch Arduino Extension This Scratch extension lets you interact with the physical world using an Arduino board. For example, you can control lights and motors or measure light and temperature. The extension communicates with an Arduino board running the Firmata firmware. The Arduino extension uses ScratchX, which is the Experiemental Extension system for the Scratch programming language. Arduino board with a Grove LED, button, and temperature sensor. Arduino board ArduinoBoardMega2560 Overview The Arduino Mega 2560 is a microcontroller board based on the ATmega2560 (datasheet). It has 54 digital input/output pins (of which 15 can be used as PWM outputs), 16 analog inputs, 4 UARTs (hardware serial ports), a 16 MHz crystal oscillator, a USB connection, a power jack, an ICSP header, and a reset button. It contains everything needed to support the microcontroller; simply connect it to a computer with a USB cable or power it with a AC-to-DC adapter or battery to get started.

How to Make Everything Ourselves: Open Modular Hardware A modular system unites the advantages of standardisation (as parts can be produced cheaply in large amounts) with the advantages of customisation (since a large diversity of unique objects can be made with relatively few parts). Modularity can be found to a greater or lesser extent in many products (like bicycles and computers) and systems (like trains and logistics), but the best examples of modular systems are toys: LEGO, Meccano, and Erector (which is now the brand name of Meccano in the US). LEGO, Meccano and Erector are composed of relatively few elementary building blocks, which can be used to build various objects. The parts can then be disassembled and re-used to build something completely different. Apart from the elementary buildings blocks, these manufacturers have produced many more specific building blocks, which are less versatile, but further increase customisation possibilities. Grid Beam, Bit Beam, Open Beam, Maker Beam and Contraptor

Spec. : SD Memory Card Choices Hundreds of manufacturers have built thousands of memory cards and devices to SD standards. Memory cards come in a variety of storage capacities, speed classes and three different physical sizes -- SD memory card, miniSD memory card, and microSD memory card. With so many choices, it’s important to understand which SD memory card works best with your mobile phones, tablets, personal computers, video cameras, digital cameras and other electronics devices. To determine the right card to match your device, always consult the device's user manual or contact the manufacturer. Control an LED with Arduino and a Pushbutton Switch This project has been excerpted and modified from Make: Getting Started with Arduino — 3rd Edition. What You’ll Be Making After you learn how to make an LED blink with your Arduino, you’re ready to tackle this project. In this project you’ll learn how to turn your light on and off via a switch.

Arduino How will you help advance the Internet of Things using the new Arduino MKR FOX 1200? From our homes and cities to farms and factories, we're challenging you to create innovative projects that take advantage of Sigfox's global LPWA network, going beyond just remote weather stations and tweeting plants. To kick things off, we'll be giving away 30 coupons for a free Arduino MKR FOX 1200 on our online store to the best ideas submitted by September 15th. Makers will have until November 15th to enter their projects via Arduino Create. We’ll be selecting the top 3 projects based on originality, quality, creativity and social impact. The winning entries will be awarded with: What is Arduino Arduino is an open-source prototyping platform based on easy-to-use hardware and software. Arduino provides an open-source and easy-to-use programming tool, for writing code and uploading it to your board. It is often referred to as the Arduino IDE (Integrated Development Environment). The Arduino boards are able to read inputs - light, proximity or air quality on a sensor, or an SMS or Twitter message - and turn it into an output - activating a motor, turning on a light, publishing content online or trigger external events. You can tell your board what to do by writing code and uploading it to the microcontroller on it using the Arduino programming language (based on Wiring), and the Arduino Software (IDE), based on Processing. Over the years Arduino has powered thousands of projects.