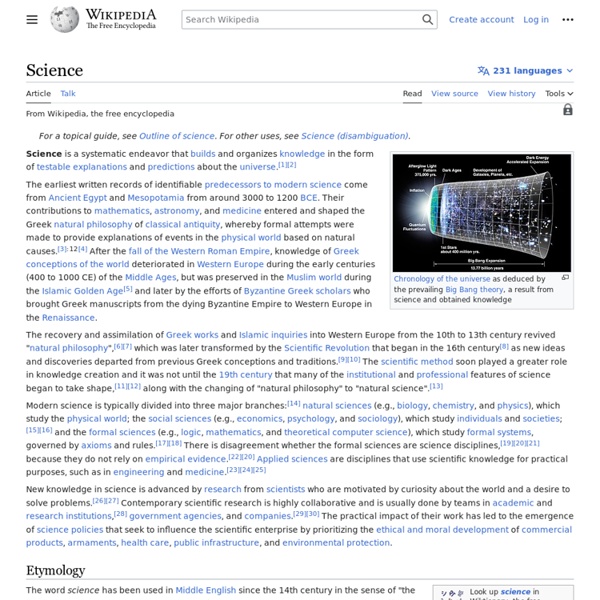 Systematic enterprise that builds and organizes knowledge The Universe represented as multiple disk-shaped slices across time, which passes from left to right Science (from Latin scientia 'knowledge')[1] is a systematic enterprise that builds and organizes knowledge in the form of testable explanations and predictions about the universe.[2][3][4] History Science in a broad sense existed before the modern era and in many historical civilizations.[38] Modern science is distinct in its approach and successful in its results, so it now defines what science is in the strictest sense of the term.[3][5][39] Science in its original sense was a word for a type of knowledge, rather than a specialized word for the pursuit of such knowledge. In particular, it was the type of knowledge that people can communicate to each other and share. Earliest roots Clay models of animal livers dating between the nineteenth and eighteenth centuries BCE, found in the royal palace in Mari, Syria Classical antiquity

Machine learning Machine learning is a subfield of computer science[1] that evolved from the study of pattern recognition and computational learning theory in artificial intelligence.[1] Machine learning explores the construction and study of algorithms that can learn from and make predictions on data.[2] Such algorithms operate by building a model from example inputs in order to make data-driven predictions or decisions,[3]:2 rather than following strictly static program instructions. Machine learning is closely related to and often overlaps with computational statistics; a discipline that also specializes in prediction-making. It has strong ties to mathematical optimization, which deliver methods, theory and application domains to the field. Machine learning is employed in a range of computing tasks where designing and programming explicit, rule-based algorithms is infeasible. Example applications include spam filtering, optical character recognition (OCR),[4] search engines and computer vision.

Physics Various examples of physical phenomena Physics is one of the oldest academic disciplines, perhaps the oldest through its inclusion of astronomy.[8] Over the last two millennia, physics was a part of natural philosophy along with chemistry, certain branches of mathematics, and biology, but during the Scientific Revolution in the 17th century, the natural sciences emerged as unique research programs in their own right.[b] Physics intersects with many interdisciplinary areas of research, such as biophysics and quantum chemistry, and the boundaries of physics are not rigidly defined. Physics also makes significant contributions through advances in new technologies that arise from theoretical breakthroughs. History Ancient astronomy Astronomy is the oldest of the natural sciences. Natural philosophy Classical physics Physics became a separate science when early modern Europeans used experimental and quantitative methods to discover what are now considered to be the laws of physics.[15] Philosophy

Philosophy Philosophy is the study of general and fundamental problems, such as those connected with reality, existence, knowledge, values, reason, mind, and language.[1][2] Philosophy is distinguished from other ways of addressing such problems by its critical, generally systematic approach and its reliance on rational argument.[3] In more casual speech, by extension, "philosophy" can refer to "the most basic beliefs, concepts, and attitudes of an individual or group".[4] The word "philosophy" comes from the Ancient Greek φιλοσοφία (philosophia), which literally means "love of wisdom".[5][6][7] The introduction of the terms "philosopher" and "philosophy" has been ascribed to the Greek thinker Pythagoras.[8] Areas of inquiry Philosophy is divided into many sub-fields. Epistemology Epistemology is concerned with the nature and scope of knowledge,[11] such as the relationships between truth, belief, and theories of justification. Rationalism is the emphasis on reasoning as a source of knowledge. Logic

Home | Museum of Science, Boston Biology History The objects of our research will be the different forms and manifestations of life, the conditions and laws under which these phenomena occur, and the causes through which they have been effected. The science that concerns itself with these objects we will indicate by the name biology [Biologie] or the doctrine of life [Lebenslehre]. Although modern biology is a relatively recent development, sciences related to and included within it have been studied since ancient times. Natural philosophy was studied as early as the ancient civilizations of Mesopotamia, Egypt, the Indian subcontinent, and China. However, the origins of modern biology and its approach to the study of nature are most often traced back to ancient Greece.[6] While the formal study of medicine dates back to Hippocrates (ca. 460 BC – ca. 370 BC), it was Aristotle (384 BC – 322 BC) who contributed most extensively to the development of biology. Foundations of modern biology Cell theory Main article: Cell theory Genetics

Computer science Computer science deals with the theoretical foundations of information and computation, together with practical techniques for the implementation and application of these foundations History[edit] The earliest foundations of what would become computer science predate the invention of the modern digital computer. Machines for calculating fixed numerical tasks such as the abacus have existed since antiquity, aiding in computations such as multiplication and division. Further, algorithms for performing computations have existed since antiquity, even before sophisticated computing equipment were created. The ancient Sanskrit treatise Shulba Sutras, or "Rules of the Chord", is a book of algorithms written in 800 BCE for constructing geometric objects like altars using a peg and chord, an early precursor of the modern field of computational geometry. Time has seen significant improvements in the usability and effectiveness of computing technology. Contributions[edit] These contributions include:

Science n. mid-14c., "what is known, knowledge (of something) acquired by study; information;" also "assurance of knowledge, certitude, certainty," from Old French science "knowledge, learning, application; corpus of human knowledge" (12c.), from Latin scientia "knowledge, a knowing; expertness," from sciens (genitive scientis ) "intelligent, skilled," present participle of scire "to know," probably originally "to separate one thing from another, to distinguish," related to scindere "to cut, divide," from PIE root *skei- "to cut, to split" (cf. Greek skhizein "to split, rend, cleave," Gothic skaidan, Old English sceadan "to divide, separate;" see shed (v.)). From late 14c. in English as "book-learning," also "a particular branch of knowledge or of learning;" also "skillfulness, cleverness; craftiness." From c.1400 as "experiential knowledge;" also "a skill, handicraft; a trade." Science, since people must do it, is a socially embedded activity.

Netflix Netflix, Inc. is a provider of on-demand Internet streaming media available to viewers in North and South America, the Caribbean, and parts of Europe (Denmark, Finland, Ireland, The Netherlands, Norway, Sweden, United Kingdom, France, Switzerland, Austria, Belgium, and Germany),[4] and of flat rate DVD-by-mail in the United States, where mailed DVDs are sent via Permit Reply Mail. The company was established in 1997 and is headquartered in Los Gatos, California. It started its subscription-based service in 1999. As of September 2014, Netflix has subscribers in over 40 countries, with intentions of expanding their services in unreached countries (such as New Zealand).[6] History[edit] Netflix headquarters in Los Gatos. In 2000, Netflix was offered for acquisition to Blockbuster for $50 million, however Blockbuster declined the offer. Netflix developed and maintains an extensive personalized video-recommendation system based on ratings and reviews by its customers. International[edit]