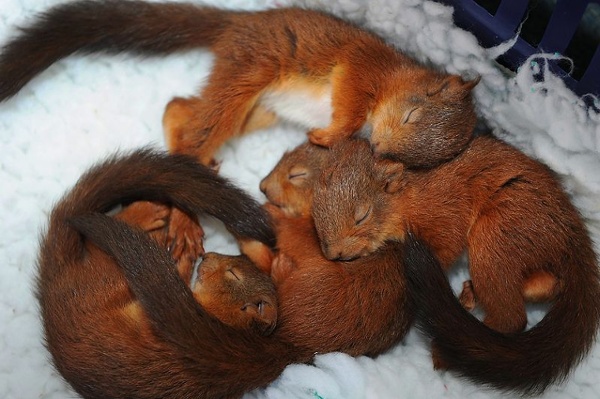 Dormouse is rehomed in a coconut shell By Nick Enoch Updated: 10:34 GMT, 15 February 2012 There's a good chance this dormouse has been dreaming of sipping Malibu and Coke through a tiny straw on a tropical beach... because his new home is a coconut shell. The adorable creature was rehomed after he was seen scuttling across the floor of a tea shop in Lyme Regis, Dorset. Perhaps he wanted a nice cuppa, just like the cute critter in Lewis Carroll's Alice's Adventures In Wonderland.

ZooBorns The San Diego Zoo’s Mandrill group welcomed a new addition to their ranks last week. Female, Kesi, gave birth to a baby boy, and he is the first Mandrill born at the Zoo in over 14 years. Animal care staff had been watching for Kesi to give birth; but the night before, there were still no signs she was in labor. Portraits of Dogs as They Shake Off Water For her series “Shake“, pet photographer Carli Davidson photographed curious portraits of dogs shaking off water. Use a fast shutter speed and you can capture all kinds of strange expressions on your dog’s face. You can find the rest of the photographs in the series here. One man, 100,000 toothpicks, and 35 years: An incredible kinetic sculpture... Thirty five years ago I had yet to be born, but artist Scott Weaver had already begun work on this insanely complex kinetic sculpture, Rolling through the Bay, that he continues to modify and expand even today. The elaborate sculpture is comprised of multiple “tours” that move pingpong balls through neighborhoods, historical locations, and iconic symbols of San Francisco, all recreated with a little glue, some toothpicks, and an incredible amount of ingenuity. He admits in the video that there are several toothpick sculptures even larger than his, but none has the unique kinetic components he’s constructed. Via his website Weaver estimates he’s spent over 3,000 hours on the project, and the toothpicks have been sourced from around the world:

School and Bailar « The life of an East Coast Kid September 13, 2009 by East Coast Kid Since my last blog i have done sooo much. I finished up my first week of school and now I have a bunch of new friends! Well I started by taking the bus in the morning which im not completely used to because back in CT I usually take a car to the metro-north train and then go to the SONO (South Norwalk) train station then from there I take a bus to school… crazy huh… well having to do a commute like that really messes up your mind.

Cat-Sized Rats on the Prowl in the Florida Keys Cat-Sized rats have been showing their whiskers in the Florida Keys. These gigantic rodents are called Gambian giant pouch rats and their rate of reproduction has allowed them to overcome efforts to eradicate the creatures for the past four years. They can produce 20 offspring within nine months. One concern of officials in Miami is that this species could migrate to the mainland and destroy valuable crops. Scott Hardin, the Exotic Species Coordinator for Florida’s Fish and Wildlife Conservation Commission, said that they “thought we had them whipped as of 2009….

Web's Tastiest: Pancakes Recipes Everyone knows that breakfast is the most important meal of the day. So of course you want to get off to a good, healthy start. However, anyone with kids knows that some mornings are just too special to worry about a properly balanced meal. Spending time in the kitchen as a family, whipping up something absolutely decadent and definitely too sweet, is the stuff that memories are made of. An Unexpected, But Adorable, Rescue of a Baby Squirrel A family was enjoying an afternoon outside when they happened upon a tiny baby squirrel in their back yard. Its tail was wet and it absolutely refused to move from its spot. He was pearched precariously on top of rocks near a small stream - a strange spot for a baby squirrel to favor. Upon closer inspection, they realized that the squirrel wasn't alone!

Goat + Sheep = baby Geep! Sheep-goat hybrid Oreo and his mum at a NSW children's daycare centre. Picture: Gary Graham Source: The Daily Telegraph HALF sheep, half goat? 6 day old bunny Random photo Submit your photo Stumble Thru animal photography Tags: baby animal Civets Kittens Civets are small, lithe-bodied, mostly arboreal mammals native to the tropics of Africa and Asia. The Owston's Palm Civet is a civet that lives in the forests and wooded lowland river basins of northern Vietnam, northern Laos, and southern China. These beautiful cubs are part of a conservation breeding programme at Newquay Zoo in Cornwall which also directly supports an overseas conservation project in the civets native home of Vietnam. Director of Newquay Zoo, Stewart Muir said “We are delighted that the breeding programme for this endangered species is doing well. It was only four years ago that the first six Owston’s Civets were allowed out of Vietnam to three UK zoo’s to start a breeding programme.