Bambi and Thumper do exist 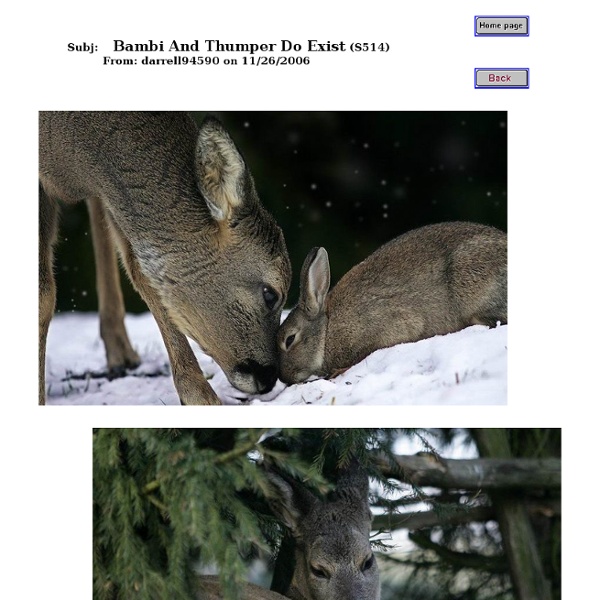 Be Warned! This Gallery Is Not For Those Who Can’t Handle A Monstrous Amount Of Cuteness: 40 Pictures Of Puppy Dogs November 29, 2010 | 399 Comments » | Topics: Cute, Dog, Pictures Meet Ruth The Tiny Baby Sloth Published on Sunday, October 17, 2010 by administrator EmailShare 2EmailShare The Rosamond Gifford Zoo has an exceptionally sleepy and exceptionally adorable new addition – a 6-week-old baby Hoffman’s Two-toed Sloth. Born underweight, Ruth as she has been named has bounced back thanks to keepers supplanting her nursing with nutritional formula. Now Ruth is happy, healthy and as active as Two-toed Sloth ought to be, which is to say, pretty laid back. Sloths are not on the endangered species list. After years of tremendous success with its sloth breeding program, the zoo took a 16 year hiatus. Though zoo staff initially supplemented her diet with formula, she is now thriving under the care of her mother. Sloths are identified by the number of long, prominent claws that they have on each front foot. News:

Фото и рисунки, арт и креативная реклама Just like home: Adorable baby dolphin rescued and hospitalised A baby dolphin is lowered into a swimming pool just hours after being rescued. The mammal was discovered by walkers on a beach near the Uruguayan capital, Montevideo. It was suffering from injuries believed to have been caused by a fishing net. There was no sign of its mother. Richard Tesore, head of the NGO Rescate Fauna Marina, has been caring for tiny animal in Piriapolis, 62 miles east of the capital, Montevideo.And while his cute charge is a hit with visitors, it seems they must queue behind a penguin if they want to see him. Information and image sources: 1 2 Amazing Animals Photos: Baby Hippo Adopted by 100 Year-Old Tortoise Here's the heart-warming story of the day: "The hippopotamus, nicknamed Owen and weighing about 300 kilograms (650 pounds), was swept down Sabaki River into the Indian Ocean, then forced back to shore when tsunami waves struck the Kenyan coast on December 26, before wildlife rangers rescued him." More, with photos, after the jump. >> WATCH SLIDESHOW: 10 Really Great Animal Dads (Slideshow) It is incredible. >> WATCH SLIDESHOW:Superhero Animals Saving Other Animals For those who don't believe it, it's apparently true according to TruthorFiction.com. ::100 Year-old Tortoise acts as Mom to Baby Hippo, via reddit.