7 Reasons To Raise Rabbits For Meat. USDA/Flickr As one of the best meats people can consume, rabbits offer families a rewarding way to supplement their diet. 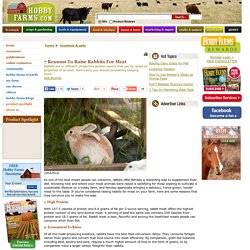 Knowing how and where your meat animals were raised is satisfying for those seeking to cultivate a sustainable lifestyle on a hobby farm, and families appreciate bringing a delicious, home-grown, tender meat to the table. If you’ve considered raising rabbits for meat on your farm, here are some reasons that may convince you to make the leap. 1. High Protein With 167.5 calories of protein and 6.8 grams of fat per 3-ounce serving, rabbit meat offers the highest protein content of any land animal meat. 2.

Of all the meat-producing livestock, rabbits have the best feed conversion ratios: They consume forages rather than grains and convert that food source into meat efficiently. 3. It takes rabbits 70 days from birth to reach market weight. 4. Rabbits thrive best in all-wire hutches, which can be purchased used for those just starting out. 5. 6. 7. Rabbits in Colonies 101 - The Domestication of Cattle Cait Blog. Raising rabbits in colonies is not a new concept, although it may seem new to the modern rabbit breeder. 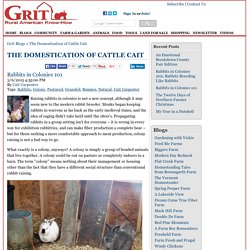 Monks began keeping rabbits in warrens as far back as the early medieval times, and the idea of caging didn’t take hold until the 1800’s. Propagating rabbits in a group setting isn’t for everyone – it is wrong in every way for exhibition rabbitries, and can make fiber production a complete bear – but for those seeking a more comfortable approach to meat production, colony raising is not a bad way to go. Feeding Rabbits: Making Hay for the Hutch - Animals. Feeding rabbits is a hot topic among enthusiasts, but the one thing most rabbit-rearing folks agree on is that the loppers should have ad-lib access to hay. 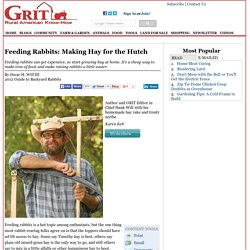 Some say Timothy hay is best, others say plain old mixed-grass hay is the only way to go, and still others say to mix in a little alfalfa or other leguminous hay to boot. Either way, between the eating and the pulling of hay from the feeders for bedding, at the end of the year, you could be looking at up to 100 pounds of hay per rabbit (enthusiasts heatedly disagree on just how much hay an individual rabbit will need). While many folks rush off to the pet store to source miniature hay bales for big bucks, others source it more reasonably in 70-pound bales right from the farm. Most seem not to realize that making hay the old-fashioned way can reduce their hay bill to nil — and maybe even their waistline by several inches. You don’t need more than a bit of backyard to make it happen. Making hay the old-fashioned way. Satin Angora Rabbits. Learn more about the Satin Angora Rabbit Breed. 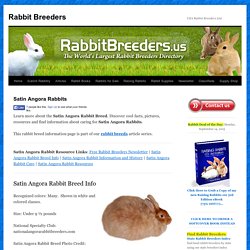 Size: Under 9 ½ pounds. Pies and Tarts for Dinner and Dessert by Stéphane Reynaud. Black Rabbit Farm - Young Farmers Start from Scratch. When you hear about young people running a farm, it’s usually someone who’s been farming their entire lives. 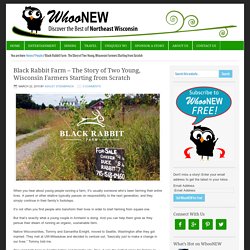 A parent or other relative typically passes on responsibility to the next generation, and they simply continue in their family’s footsteps. It’s not often you find people who transform their lives in order to start farming from square one. But that’s exactly what a young couple in Amherst is doing. And you can help them grow as they persue their dream of running an organic, sustainable farm. Native Wisconsinites, Tommy and Samantha Enright, moved to Seattle, Washington after they got married. They had both been to Seattle before and liked the city. Tommy and Sam spent five good years in Washington state. He also told me Seattle definitely has that buy local, support local mindset – and it grew on them. “It makes sense no matter where you live. 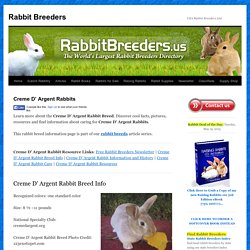 Raising Rabbits. Learn everything you need to know about raising rabbits for fur, meat and pets. 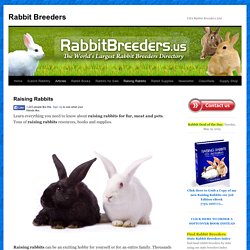 Tons of raising rabbits resources, books and supplies. Raising rabbits can be an exciting hobby for yourself or for an entire family. Thousands of people across the United States choose to take part in the rabbit industry, by raising and breeding their own rabbits. Rareharebarn. Holistic Aromatherapy for Animals: A Comprehensive Guide to the Use of Essential Oils & Hydrosols with Animals by Kristen Leigh Bell. The Rabbit-Raising Problem Solver. By Francesca Shanks on April 8, 2015 Rabbits can be a sustainable addition to a backyard or rooftop farm. 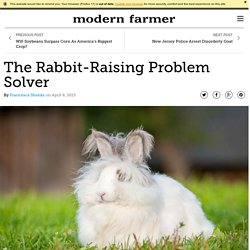 Angora pelts are beautiful and sought-after. Keeping a pet rabbit is easy—you can even train it to use a litter box—and the experience can show young children how to responsibly handle small animals. But how to begin? 2014 Breeders Directory Smallfile 1. The Rabbit-Raising Problem Solver: Your Questions Answered about Housing, Feeding, Behavior, Health Care, Breeding, and Kindling by Karen Patry. The Rabbit-Raising Problem Solver. Rabbit Supplies - Rabbit Cages, Rabbit Hutches. Rabbit Haven - Supply List. Bunny Basics Download our Bunny Basics Manual Shopping List If you're getting a new bunny, you're going to need a few things! 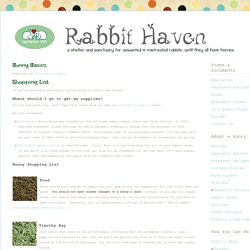 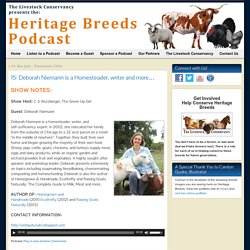 In 2002, she relocated her family from the suburbs of Chicago to a 32 acre parcel on a creek “in the middle of nowhere”. Together, they built their own home and began growing the majority of their own food. Raising Rabbits for Meat and Breeding Stock. In the early 20th century, the rabbit was an incredibly important and valuable domestic animal, providing fur, food, and – for the fancier – intense competition in the showroom. The Belgian Hare boom of 1898 to 1901 brought thousands of rabbits to the United States, commanding outstanding prices.

The record price paid for a rabbit at the time was $5,000 for Champion Fashoda, an imported Belgian Hare buck. That’s $132,000 in today’s dollars. It’s no wonder names such as Rockefeller and DuPont showed up in the Belgian Hare world. For the average person’s 1919 budget, an American Blue doe could still command a price of $25, which adjusts for inflation to about $300 today. The Beginner Rabbit Keeper Experiences. This is my first time raising rabbits. About one month ago I was getting some feed for my chickens in one of the pet stores in the town and I saw a small cage with rabbits about three to four weeks old. I brought two of these bunnies home. I was so excited that I did not remember that the rabbit tractor that we were building for them was not ready yet. Chicken and rabbit tractors under construction Well, I just put them inside the Bantams’ tractor and watched to see what would happen. Beyond The Pellet by Boyd Craven Jr.

Natural Pet Care by Pat Coleby. American Chinchilla and Cinnamon Rabbits. We added a beautiful breeding pair of Cinnamon rabbits to our herd over the winter, they are the "spice" of the rabbit world and we are excited to have them join our rabbit family. Cinnamon's are a true American Heritage breed of rabbit, created in Montana in 1972. They're a larger breed and grow to between 9 and 11 pounds. With their unique coloring and wonderful temperament these rabbits are very attractive and useful as meat, fur, show, and pet. The Cinnamon coloring is a gorgeous dusty tan with a bright orange undercolor, dark shaded tips to the guard hair, with the shading gradually increasing down the sides and extremities of the rabbit until the belly of the rabbit is a stormy gray with pearl undercolor.

The mother of the doe in the bottom left picture is the National Champion Best of Breed Cinnamon Rabbit and the buck above and below on the right comes from the same breeder. American Chinchilla Rabbits. Learn more about the American Chinchilla Rabbit Breed. Discover cool facts, pictures, resources and find information about caring for American Chinchilla Rabbits. This rabbit breed information page is part of our rabbit breeds article series. Silver Fox Rabbits - The Livestock Conservancy. The Silver Fox rabbit is the third breed developed in the United States. It was created by Walter B. Garland of North Canton, Ohio. The Silver Fox is truly a multi-purpose breed, raised for meat and fur. The breed was recognized and a standard approved in 1925 under the name American Heavyweight Silver.

In 1929 the name was changed to the American Silver Fox and later to Silver Fox. The genetic make-up of the breed has never been divulged. Emancipation Acres. The bigger the farm gets, the more demands are placed on our time. American Chinchilla rabbit - The Livestock Conservancy. The first Chinchillas were created by a French engineer M.J. Suggested Vegetables & Fruits for Rabbits. "Cage-free Rabbits: Fertilizer in Motion" by Megan Kutchman page one. I have always wanted to raise rabbits as a healthy meat addition to our homestead. The trouble is, keeping caged rabbits does not fit in with my philosophy on natural animal care, and I didn’t feel comfortable getting rabbits without finding a solution to keeping them in the typical cages they are housed in. On the other hand, my housing solution needed to be economical, because we can’t afford luxury accommodations for livestock intended as a food source.

To us, the most obvious place to start was with food. We’ve been building our gardens year by year and preserving food as the gardens produce it, but it became apparent pretty quickly that we could never produce enough for our family with plants alone. It also became apparent that for our farm to be sustainable, animals would need to be eliminated from time to time or we’d be overrun. Rabbit tractors. Skyview Acres' rabbits are raised on the ground, on fresh pasture daily.

We studied a lot of chicken tractors, checked out Polyface's and Nature's Harmony's rabbit tractors, and started brainstorming for a design we liked. Considerations: Hutch for kindling and protection from weather and predatorsEnough grass area for a doe plus her litterKeeping pellet feed dry during the rainEasily movableSeasonally friendly - not too hot in the summer, protection from snow and cold in the winterDurability We searched and searched all over the internet to find others keeping rabbits on pasture but we didn't find very many examples.

So we got creative and started building. Hare Pen. Raising Rabbits in Colonies fljaoy. The End of Pastured Rabbit - Thoughtful Food  Butchering Poultry, Rabbit, Lamb, Goat, and Pork: The Comprehensive Photographic Guide to Humane Slaughtering and Butchering by Adam Danforth. Julie Engel and her Sustainable System for Raising Rabbits on Pasture / North Central SARE From the Field / From the Field. Raising Rabbits on Pasture. A Beginner's Guide to Raising Rabbits - Sustainable Farming. With the meat situation what it is and the economy in a turmoil, now is a good time to consider the rabbit business. The best way I know to put good food on the table and a few dollars in your pocket, without a large investment, is raising rabbits. The profits can come in many ways: You can sell the urine for laboratory use, the manure for fertilizer or worm growing, even the feet for good luck charms. Meat, however, is by far the most important product.

What follows is a mini-manual that tells how to get started on a shoestring, without the costly items the so-called experts say you should have. I'll try to cover all phases of a new operation and to help the novice avoid pitfalls that aren't mentioned in books or other guides to this subject. Black Rabbit Farm among local foods newcomers. Angora Rabbits, the Complete Owner's Guide, Includes English, French, Giant, Satin and German Breeds. Care, Breeding, Wool, Farming, Lifespan, Colors, by Ann L. Fletcher. Emancipation Acres Recommends... - Completely Angora. The Indian Tipi:book section on making mocassins. Rabbits raised on "forage?"