RODENTS can be found in virtually every habitat and make up 40% of mammal species alive today. Rodents include rats, mice, guinea pigs, squirrels, hampsters, beavers and porcupines. At 150lbs, the Capybara is the largest rodent.

It was thought RABBITS were also rodents but it turns out rabbits are not closely related at all. Rabbits, along with hares and pikas, make up the Family Lagomorpha. Although rabbits can hop several times their body length, they are unable to walk. Jimmy Carter rabbit incident. 1979 incident in which Jimmy Carter was attacked by a swamp rabbit April 20, 1979 White House photo of Carter and rabbit from the Carter Library The Jimmy Carter rabbit incident, sensationalized as a "killer rabbit attack" by the press, involved a swamp rabbit that swam toward then–U.S. 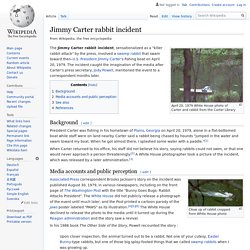 President Jimmy Carter's fishing boat on April 20, 1979. The incident caught the imagination of the media after Carter's press secretary, Jody Powell, mentioned the event to a correspondent months later. Background[edit] President Carter was fishing in his hometown of Plains, Georgia on April 20, 1979, alone in a flat-bottomed boat while staff were on land nearby. When Carter returned to his office, his staff did not believe his story, saying rabbits could not swim, or that one would never approach a person threateningly.[2] A White House photographer took a picture of the incident, which was released by a later administration.[3] Media accounts and public perception[edit] See also[edit] References[edit]

Dormouse is rehomed in a coconut shell. By Nick Enoch Updated: 10:34 GMT, 15 February 2012 There's a good chance this dormouse has been dreaming of sipping Malibu and Coke through a tiny straw on a tropical beach... because his new home is a coconut shell. 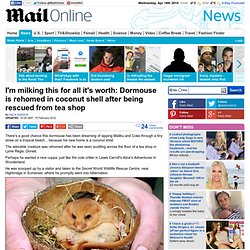 The adorable creature was rehomed after he was seen scuttling across the floor of a tea shop in Lyme Regis, Dorset. Perhaps he wanted a nice cuppa, just like the cute critter in Lewis Carroll's Alice's Adventures In Wonderland. He was scooped up by a visitor and taken to the Secret World Wildlife Rescue Centre, near Highbridge in Somerset, where he promptly went into hibernation. Tiny Mouse Climbing a Dandelion. We've met the cutest kitten in the world and her equally adorable partner in crime, but this tiny harvest mouse on a dandelion rivals their cuteness! 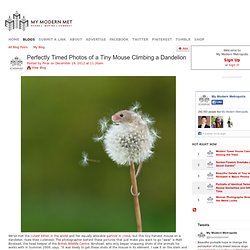 The photographer behind these pictures that just make you want to go "aww" is Matt Binstead, the head keeper of the British Wildlife Centre. Binstead, who only began snapping shots of the animals he works with in Summer 2009, says, "It was lovely to get these shots of the mouse in its element. I saw it on the stem and just waited for it to climb all the way to the top. " We're so glad that he had the patience to produce such adorable photos. Bunny in a box. Squirrel babies. Photographer waited in a river nightly for 4 years to get this singular shot of a beaver : TreeHugger. Donning snorkeling gear and weights, Louis-Marie Preau would lie motionless on the riverbed for 2 to 3 hours a night waiting for the perfect photo. 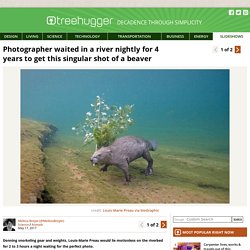 Suffice to say, photographers can be a bit obsessive. And wildly patient. Both of which are wonderfully, beautifully evident in this jaw-dropping photo of a Eurasian beaver fetching dinner in the Loire region of western France. WIth the unfortunate fate of having both fur and castoreum the subject of great lust for trappers, Eurasian beavers were nearly hunted to extinction by the middle of the 19th century. 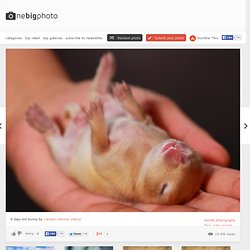 Mice Olympics. Mice in Blades of Grass. Researcher decodes prairie dog language, discovers they've been talking about us (Video) You might not think it to look at them, but prairie dogs and humans actually share an important commonality -- and it's not just their complex social structures, or their habit of standing up on two feet (aww, like people). 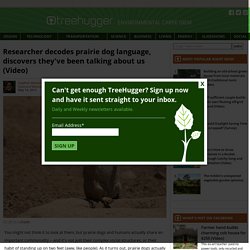 As it turns out, prairie dogs actually have one of the most sophisticated forms of vocal communication in the natural world, really not so unlike our own. After more than 25 years of studying the calls of prairie dog in the field, one researcher managed to decode just what these animals are saying. And the results show that praire dogs aren't only extremely effective communicators, they also pay close attention to detail. According to Dr. Con Slobodchikoff, who turned his vocalization analysis on the Gunnison's prairie dog of Arizona and New Mexico, the chirps these animals use as 'alert calls' are actually word-like packages of information to share with the rest of the colony.

And, when they're talking about humans, that might not always be flattering.